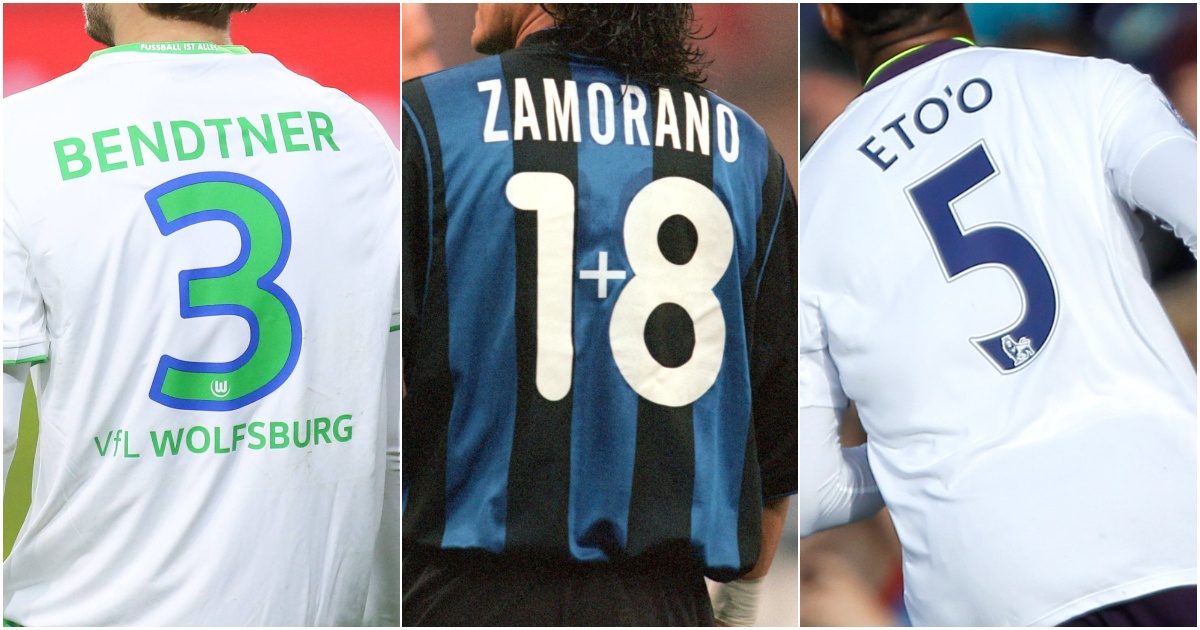 Radamal Falcao’s return to La Liga and slightly surprisingly brilliant start to life with newly promoted Rayo Vallecano has delighted many, with “El Tigre” being fondly remembered for his exploits with Atletico Madrid when he became one of the world’s most feared strikers.

What was also surprising was the number Falcao chose to wear on his return to Spain: 3.

The Colombian marksman had worn the 9 shirt for the duration of his career in Europe, so did he simply take a number more associated with defenders as his usual number was already taken.

Not quite, Falcao explained that he took the shirt in honour of his father, who had worn it throughout his own career, and who sadly passed away in 2019.

Like many of the weird and wonderful numbers chosen by strikers, there’s usually a method to their madness.

When shirt numbers became part of football in 1939, it was very simple – you wore the number for your position, something Burnley and Sean Dyche recreated in a game earlier this season in a beautiful show of symmetry.

This meant that strikers wore 9 and 10 – think of all the greats that donned these and passed them down the generations to the point where nearly all first-choice forwards select these iconic numbers.

As squad numbers were introduced in the early 90s, allowances were made for first choice forwards wearing the classic winger numbers 7 and 11 – think of Cantona, Ronaldo (literally renamed CR7), Romario, Salah and Drogba.

No. 8 is a bit stickier, being the midfield maestro’s number, but we’ll make an exception for Ian Wright (x3), Dennis Bergkamp while in the orange of the Netherlands and Wayne Rooney in his early United days, although he switched to 10 the minute it became available.

Now that we’ve made it through the more recognisable striker shirt numbers, let’s go back to the start and look at the rest, starting from, well, the only possible place to start.

0
Now you’re probably thinking, who outside of the NBA (shout outs to Russell Westbrook and Damian Lillard) would choose to wear this number. Moroccan striker Hicham Zerouali did and you might then reasonably wonder why? Well, it’s in his name. And became his nickname.

“Zero” joined Aberdeen and soon turned into a fans’ favourite, becoming the first player in British league history to wear the number 0 in the process. The number was outlawed a year later by the Scottish and English Premier Leagues, making the Moroccan unique in more ways than one.

01
Ossie Ardiles had famously worn 1 at the 1982 World Cup due to the Argentinian squad numbers being handed out in alphabetical order, but he was a midfielder so let’s park him and look at Derek Riordan.

On his return to Hibernian in 2008 following a disappointing sting at Celtic, Riordan saw that his No. 10 shirt was taken and decided to take the next best thing. No, not 9 or 11, but 01. He swiftly returned to 10 the following season, making his 08-09 (80-90?) shirt something of a collector’s item.

Kone, for some inexplicable reason, decided to jump between the 2 and 9 shirt at different points in his career, wearing the number more associated with right backs for Wigan in the 2012-13 season.

At least Bony had a reason, albeit not a great one. To mark his second coming, following a return from Man City, Wilfried decided to go full blown Matt Hardy Version 2 and take the number despite the 9 shirt being available. The sequel did not live up to the original.

Dempsey, meanwhile, made the tragic move of giving himself his own nickname: Deuce, in tribute to the shirt number he wore during his college career in the US. He wore it again as a professional with Spurs.

3
Like Falcao, Ghana legend Asamoah Gyan had family reasons behind his decision to wear the number – his older brother had worn it. Gyan’s attachment to the number led him to wearing 33 while at Sunderland when 3 was taken.

Nicklas Bendtner also donned the left back’s number while at Wolfsburg – unfortunately 3 was not a magic number for him, as it would represent his league goals tally while in Germany.

4
Two more African striking legends here – Nwankwo Kanu and Emmanuel Adebayor. Like Gyan, Kanu inherited the jersey from his brother. Adebayor simply took it because of his admiration for the Nigerian forward.

5
A tale of the two sides of Merseyside here. Upon signing for Liverpool in 2002, Czech Milan Baros was handed the shirt. Only problem being he was a nimble striker, not a bruising centre half. Somehow, for a club famous for their 9s, Baros started the 2005 Champions League final in the 5 shirt – a lucky omen perhaps.

On the blue side, Samuel Eto’o seemingly took the number on his own accord in 2014, despite being one of the best 9s of the past decade. Unfortunately, he scored like a centre half and five would represent the number of months he spent at Goodison before returning to Italy.

Back to Adebayor – he decided to rock the 6 shirt while on loan at Real Madrid in the second half of the 2010-11 season. Suppose it’s an upside down 9.

13
A shirt usually associated with sub goalkeepers in the UK, the shirt is somewhat revered in Germany due to legendary striker Gerd Muller wearing it throughout his international career. His namesake Thomas and fellow talisman Michael Ballack would also wear the shirt, likely in his honour.

18
Okay. this isn’t a particularly unusual squad number for a striker. At Spurs alone, it’s a squad number that’s been on the back of such legendary all-time great strikers as Jurgen Klinsmann, Harry Kane and Fraizer Campbell. But it’s also one of this writer’s favourites and worn by one of the inspirations for this piece – Ivan Zamorano. While at Inter, the Chilean was in possession of the coveted 9 shirt. That was until the original Ronaldo decided he wanted to change from the 10 shirt in the summer of 1998, R9 and all that.

Zamorano switched to 18 but in an ingenious move, added a + sign between the 2 numbers.

32
Now we’re into the realm of jersey numbers you’d expect to see a youngster given upon joining the first-team squad.

Carlos Tevez wore this shirt throughout his stint in England, despite wearing 9-11 for most of his career. Christian Vieri also wore at Inter. Cool enough.

39
Nicolas Anelka. Le Sulk. A complex number for a complex figure in the game.

Must be the most obscure number to top score a top league, which the Frenchman did with Chelsea in 2008-09.

45
Speaking of complex, say hello to Mario Balotelli. Like Zamorano, while at Inter a young Ballo joked that 4+5=9, took the shirt number and scored in his next four games.

He decided to keep it for stints at Man City and Liverpool, which were… interesting.

52
Enter Lord Bendtner once again and some more maths for dummies. At the start of the 2009-10 season, the Dane doubled up, going from 26 to 52 as seven was his favourite number, and you guessed, it 5+2 equals etc.

To be fair to him, he did offer to cover the costs of anyone who owned a 26 shirt, which was probably lower than the new number on his back.

76
In the summer of 2008, AC Milan brought back club legend Andriy Shevchenko, as well as fellow A-lister Ronaldinho and lesser lights in Mathieu Flamini and Luca Antonio.

All players decided to wear the year of their birth, meaning the Ukrainian went from his famous 7 shirt to the more bizarre 76 shirt for his second spell in Serie A.

88
Like Sheva, Gary Hooper wore the year of his birth upon joining Celtic from Scunthorpe United in 2010, which meant the striker wore 88 for the duration of his successful stint in Glasgow. We are now depressingly close to strikers having the year of their birth on their back producing entirely commonplace squad numbers. We’re already there with goalkeepers and full-backs.

Back to Hooper and in a nice coincidence, Celtic were founded in 1888, adding to the number selection.

Upon his return to Serie A in January 2007, Ronaldo wore the 99 shirt for the other Milanese giants simply due to the 9 shirt already being in the possession of Filippo Inzaghi.

100
From 0 to 100 – another utterly absurd jersey number selection by Adolfo Bautista of Chivas De Guadalajara. The Mexican striker remains the only top-level footballer in history to wear three digits on his back. Don’t expect that to change.