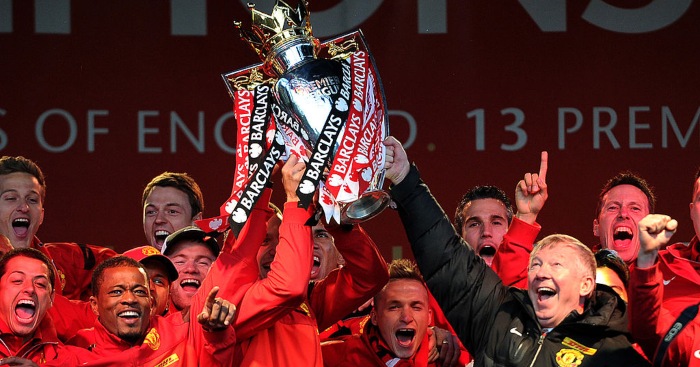 13 will be less than 1!
I am getting ready, not for Christmas, but for the strange thing that will happen if Liverpool win the League. By a twist of maths, that Pythagoras would find hard to explain. if Liverpool win one Premier League title, it will immediately be more important, significant and count for more than Manchester United’s 13 titles. Their team will be the best that has ever played the game. Their title will be a better title because they have not won it for 29 years. Their manager will be placed on top of the tree of great managers. It’s coming. But I am prepared.
Tim McKane

Get them to abandon the bus for a Lamborghini
A mailer this morning wrote about Man Utd “It’s against the teams where we are superior in quality and the difference is not supposed to be tactical, as teams sit back, that we look lost. Which again points to the quality of the squad at his disposal. No amount of tactical nous can make Fred or Pereira play defence-piercing passes.”

Mystifying analysis. Surely the tactics should consider drawing out the opposing team from their parked bus? Thus making defence piercing passes more possible. Get them to abandon the bus for a Lamborghini (that has a faulty engine).

This can mean leaving some gaps in your own defence for the opposing team to attempt to exploit. A nibble if you like. This requires courage and nerve because it opens the door for jeopardy.

Liverpool do this at full-back and teams tend to try to overload Trent’s side. (I think he can get unfairly blamed for what I think is a deliberate tactic). If they mess up we break and can be devastating as we saw last night. The jeopardy is Everton’s second goal. If you trust your defence to recover and your attackers to be better at exploiting the gaps than the opposition then Bob’s your uncle.
David lfc (Bob’s actually my nephew)

I am bemused by people who still write into the mailbox everyday citing Fred’s inability to pass the ball 5 yards like we’re all watching different games. I get that some people are still stuck with their first impression of him, where he struggled (admittedly, a lot). But for a player still gaining confidence, and getting used to playing regularly with an ever rotating cast of midfield partner, he’s posting fairly solid numbers. Of the players who have played more than 3 games for Man Utd, he ranks third in passing accuracy at just over 86%, with a solid average number of passes a game. Granted he’s had to babysit Andreas, Jesse(yes, Jesse in that Sheffield game), and a back line keen on holding onto the ball until the opposition midfield closes out all the available space then pass him the ball, I reckon he ain’t doing all that bad. He’s shown, against Spurs yesterday, the KO Champions League games last season, and pretty much every time he’s played with Scotty McSauce, that when paired with someone he doesn’t have to babysit he can set about doing his thing, which from evidence might not be worth $67 million, but decent enough to lift this team in its current state above some very good sides.
I can only hope that when Pogba returns he’s played further upfront to give Fred someone good enough to link up with rather than replace him.

I have to echo the thoughts of Budhaditya in the morning mailbox with regards to Fred.  I won’t pretend that I have not been amongst those that have used Fred as one of the many sticks with which to beat Ed Woodward but there is definitely a player in there.  He was fantastic last night and the continued development of his partnership with the increasingly important McTominay is genuinely great to watch.  Fred was popping up all over the pitch, making tackles and blocks, running onto loose balls and driving forward when possible.  He seems to be a lot more assured and confident and the supporters certainly seem to be getting on-side with him.

Andreas should never play for United again, the life is sucked out of the team when he starts or comes on.  He has decent technique but his ball retention is awful and he was outrun by Auldeweireld twice last night despite being on the pitch for 74 fewer minutes.

Rashford continues to impress and seems to be very motivated at the moment and, whether through his own confidence growing, or coaching instruction his increased use of driving towards defenders with the ball at his feet is bringing dividends for United.  I think he just needs to improve his finishing and he will truly be in the top bracket of attacking players (the bracket below Messi, Mbappe, Sterling and Ronaldo at least).  He reminds me of Andy Cole when put through on goal in that if he is presented with a chance and has no time to think he buries it but if he has time to consider his options he suffers.

AWB is a truly gifted defender but his use of the ball (not just the crossing that has been highlighted in juxtaposition with Alexander-Arnold) is bloody awful.  Hopefully this will improve with time but the lad is a magnificent defensive asset.  Harry Maguire was awful again, seeming to drop off away from the action as much as possible with Lindelof taking care of most of the actual central defensive work.  Maguire is a fine player but he seems to be totally out of form at the moment which is not ideal given United’s scarcity of alternatives.

Harry Kane.  Wow, genuinely didn’t know he was playing until he clashed off camera with McTominay and caught my eye.  Truly dreadful performance from the England captain, not that the rest of the Spurs team were any better.  With the exception of….

Delli; what a bloody goal.  Bergkamp, Berbatov and not very many others that I have seen live would or could have pulled that off.  Excellent stuff, it is not very often I applaud an opposition goal against United but I did last night.

A quick note on the VAR last night though, as brilliant as Delli’s goal was it did appear to have touched his arm on the way over his head but it was not given with the commentators lauding that as the correct decision as it “deserved” to stand.  It was phenomenal but if it did touch his hand it should not have stood.  Also the petulant kick from Gazanigga on McTominay, again while not the most violent act ever seen on a football pitch, should probably have been punished.

Anyway, great game, great result and great coverage from Amazon.  And nice to see no malice towards Mourinho from the OT faithful too.
Mangor United, Belfast

Poch and Allegri’s pulling power
I’m going to once again disagree with Eamonn.

On one hand I don’t think Poch has the international pedigree to decide whether a player comes to the club or not..    Poch  couldn’t for instance, pull Dybala towards Spurs over Man U this summer  ,if the stories are to be believed Man U had the upper hand.It’s also a bit difficult to tell whether anyone will simply show up because it’s Allegri seeing as most of the recruitment  (including the freebies)  at Juve was handled by the DOF.

In general I think it’s very rare for a player to move to a club simply because of who the manger is , the exception being were the player has played for the manager before e.g Redknapp and Kranjkjar,Van Gaal and the dutch contingent  at Barca,Jose and his son at real Madrid,By that token Poch would be a bonus for Utd  if we wanted to get Kane , However I don’t think Haaland would consider Utd  at all, due to his father’s loyalties if the current manager had not given him his start at  Molde.

Speaking of which, having Ole as manager has not stopped Utd from acquiring the best 90’s fullback in the country, or the starting centre back for the national team so again it’s hard to figure what huge advantage is supposed to accrue.
Timi, MUFC

Let’s hear from Mort Snort, Saints…
Would be great it we could hear from the Southampton fan who was laughing at Liverpool for us apparently massively overpaying for Mane who apparently had one good game in ten. If memory serves it was Southampton rent-a-gobshite in chief Mort Snort, Saints. Funnily enough, much like little thayden and Spurs you don’t hear so much from Mort these days now his team is struggling…

If Messi voted for Mane then that’s good enough for me!

For what it’s worth I don’t wish relegation on Everton. I much prefer it when both Liverpool teams are competitive but surely Silva will do well to see the day out!?
Gregory Whitehead, LFC

Net spend nonsense
Hopefully the Merseyside disaster for Everton last night will finally put the conversation to bed about Net Transfer Spend. Everton have spent £536M on players over the last five years, with a net spend of  £275M. Over the same period, Liverpool have spent  £470M on players for a net spend of  £92M… You can spend as much money as you like but it’s going to end in tears when your club is run like a circus with a League 1 level manager in charge.
Oliver Dean

Having read TIMI’s mail in yesterday’s mailbox, I have a question for F365 and its readership. Why is everyone’s go to random, ridiculous number “427”?

I’ve seen it on F365 and the mailbox far too often for it to be a coincidence. In fact, I’ve seen it at least 426 times.

Please switch up your random numbers. Please. They are no longer random.

P.S. what I would give to have Ndombele playing for Man United.
Madhav, Man United

Long time reader, first time writing in from the pearl of Africa. This has been puzzling me for a while. What’s the origin story of number 427? This almost mythical number has been stuck in my head for days. I don’t mind if the good people at the 365 towers come up with some fantastical story. I just need anything to go on.
Edgar, Lfc, Uganda (I’ve spent 20mins trying to come with something interesting for the brackets. Turns out its not as easy as it seems)

Daniel Storey
Just a quick nod to Storey for that one liner about Jesus in Winners and Losers.

I had truly expected John Terry to come on to the pitch after the final whistle, in full Chelsea kit to celebrate the victory….
Andreas (Let’s just say Liverpool were lucky with that non-penalty call….) Brussels

I’m only in the first lines of the 3rd of 16 conclusions and already I have to stop ye.

Mourinho is about a fortnight in charge. Spurs are in a run of form that stretches back to the beginning of the year.

He’s a fortnight in charge of a team that has been in the doldrums for a year. It’s too soon to draw a single sure conclusion, and you know this perfectly well. We have learned nothing about Mourinho under Spurs yet, positive or negative.

If the S*n had attempted analysis of this sort, you’d rightly have them up on Mediawatch bemoaning the heat of the take.

I don’t want to make a long mail out of it- it’s that simple.
Darragh, Spurs, Ireland

Listen to the latest episode of The Broken Metatarsal as we remember the Rafa Revolution at Liverpool, featuring Neil Mellor and comedian Adam Rowe.