Arsenal are the first team since April 2017 to go behind to and still beat Liverpool. That means plenty for both. 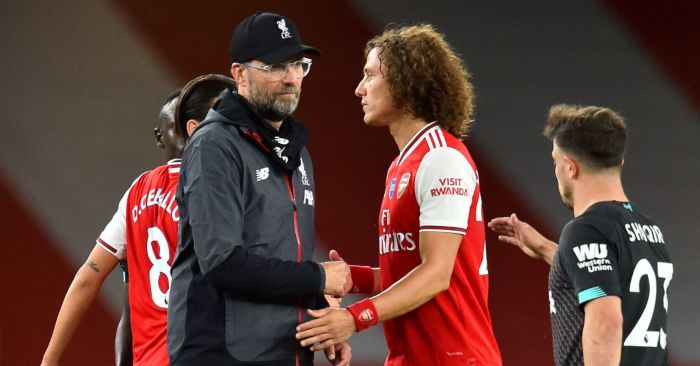 Arsenal are seeing tangible results. Liverpool might be a little too complacent…

Throw in as many wins in that time against fellow members of the Big Six, as well as the comparative composition of both squads, and it becomes apparent that Arsenal really might be on the right track.

2) That is not to say the Gunners will become English, European and world champions within a half-decade. Liverpool’s progression to that point was not linear and required a delicate combination of phenomenal planning, clear foresight, significant investment and a healthy dose of fortune.

Arsenal will tread their own path, embark on a different journey and surely reach a contrasting destination. But it is worth remembering that Klopp had his critics and Liverpool their doubters over five years of transforming from mid-table mess to title winners. They, much like Arsenal when Arteta replaced Unai Emery in December, were 10th when Klopp was appointed in October 2015. This kind of metamorphosis takes time and patience; evenings like these make it all worth it.

3) The manner of the win must be most satisfying of all for Arteta. The Gunners soaked up pressure, capitalised on two defensive mistakes they forced and protected that lead at all costs. Liverpool were Arsenalled.

One moment early in the second half showcased the hosts at their belligerent best. Liverpool had more shots in the 49th minute alone than Arsenal had all game, yet three were blocked and the other was off-target. Lucas Torreira, David Luiz and Granit Xhaka all threw themselves in the way of a barrage on Emiliano Martinez’s goal in their determination to keep the opposition out. A team that surrendered so meekly so often under Arsene Wenger and Emery showed considerable fight throughout.

4) In the 54 Premier League games following a draw with Arsenal in November 2018, Liverpool dropped 13 points. That is the same number they have conceded in the nine matches from the Watford defeat in February to this loss.

The circumstances must not be ignored; an impromptu three-month break in the middle of the season cannot be accounted for. And the nature of the title being secured so soon into the campaign is an obvious factor. But their visage of invincibility has been shattered, their intensity lost and the sheer power of momentum highlighted. As unbelievable as it is that Liverpool avoided this sort of result for so long, Klopp will be annoyed and perhaps even concerned that so many have occurred in such a short space of time. This might be enough to suspect that standards have subconsciously dropped, however understandably.

5) He won’t, though, care all that much about a points record that is guaranteed to stand for at least another season. That is one area Liverpool will not match Manchester City’s Centurions. And that is fine: they can choose between their sixth European Cup or first Premier League title when deciding where to store their tears.

But Liverpool’s post-title form does put into stark perspective just how brilliant City’s achievement was in 2018. The Reds have lost two and drawn one of their five games since securing the trophy, while Pep Guardiola oversaw four victories and a single draw from five matches after lifting the crown two years ago. Perhaps the incentive of becoming the first team to register 100 points in a season injects a team with a unique hunger that cannot be replicated by others trying to reach a bar that has already been set. Yet it feels like City’s brilliance at their peak is still taken for granted.

6) Had Jose Mourinho brought on those substitutes, it would be construed as a message to the board for greater financial backing. As it is, Klopp was simply using the players he felt best suited the situation. The replacements hardly delivered on his faith.

Takumi Minamino was bright, afforded more time than usual alongside both Mo Salah and Sadio Mane. Naby Keita was excellent and should enter next season as a regular starter in that midfield. Xherdan Shaqiri was fine. But Divock Origi was devastatingly bad, attempting one pass in 13 minutes that failed to reach its target. Klopp has shown himself to be utterly ruthless in the past and must do so again this summer with a player who, while he has contributed some crucial goals, is simply not of the requisite standard.

Divock Origi coming on as a sub for the 82nd time in all competitions for Liverpool – he's now surpassed Ryan Babel (81) to become the most used substitute in the club's history. #LFC #ARSLIV

7) Keita irrefutably is. His probing passing forced Arsenal into a number of uncomfortable positions and he is unerringly progressive and creative in an otherwise plodding midfield. If the next stage of Klopp’s Liverpool evolution is to remodel that area then Keita must be the fulcrum.

It might be that he is one of the few Liverpool players with a genuine point to prove but he looks a cut above his teammates currently in terms of both desire and quality. Keita was given half an hour and still completed the most dribbles of any player for either side (3). He has to start the final two games.

8) But Xhaka was the best midfielder on the pitch. His rehabilitation since the flashpoint against Crystal Palace has been astonishing. How was that, the long-awaited denouement of his Arsenal career, only nine months ago?

It has taken losing the captaincy in such striking fashion for him to emerge as a genuine leader in north London. The statistics paint a glorious picture – two tackles, three interceptions, five clearances and three blocked shots – but do not do completely do justice to a midfielder who finally looks settled, confident and worthy of the £35m billing. Xhaka’s organisational skills were crucial and he finally seems to have earned that air of arrogance any good player needs.

9) Yet he was partially culpable for Liverpool’s opener, his mistake in not covering the space vacated by Luiz compounding Cedric’s ill-advised challenge for a header, Torreira’s delayed tackle, Rob Holding’s passivity and Kieran Tierney’s delayed reaction. Aside from all of that, Arsenal could have done nothing to prevent Mane scoring.

The Liverpool forward earned his goal. The run was so clever. At almost the precise moment Roberto Firmino took his first touch, the Senegalese glanced around his right shoulder to check the position of Luiz, then glimpsed to his left to monitor Xhaka. Seeing that both were preoccupied only with the advancement of Firmino and the overlap run of Andy Robertson, Mane was the contradiction to a pulsating Liverpool attack: he stepped back into the gaping space instead of joining his teammates in surging forward.

When Firmino passed to Robertson, Mane was outside the penalty area. Two seconds later, he had sprinted to the edge of the six-yard box and timed his run to perfection to meet the cross and apply the finish. Arsenal being Arsenal meant it was the equivalent of painstakingly plotting how to procure confectionery from a small child over the course of a few months, but it was still a fine example of the sort of elite game intelligence Mane is rarely credited with.

10) The Arsenal defence, to their credit, recovered. Luiz won’t earn widespread praise because it is only fashionable to mock him, but Holding and Tierney might at least receive pats on the back from outside the Emirates.

They would be well earned. Tierney was wonderful in a less familiar central role, which gave him an opportunity to display his defensive attributes instead of his crossing capabilities. His focus and concentration levels are impeccable and Salah was noticeably frustrated on a number of occasions.

Holding was also great, bringing an aggression that defence has so often lacked. Arsenal were not quite as accomplished in terms of building out from the back as they would have liked but Arteta might have stumbled across as solid a foundation as he could hope to find in the current squad.

11) The absence of Shkodran Mustafi and Sead Kolasinac meant the defensive errors were transferred to Liverpool. Both Virgil van Dijk and Alisson saw weak and aimless passes intercepted by Alexandre Lacazette in the space of 12 first-half minutes, with the Frenchman scoring in the first instance and assisting Reiss Nelson in the second.

What Lacazette might want for in terms of quality he more than makes up for in work ethic. One shot and four tackles are positively Firmino numbers on an evening his Brazilian counterpart struggled.

That example is enough to show that Lacazette could lead the Arsenal line in the medium term. He certainly drops as deep as Firmino and triggers the press in a similar manner, and any doubts over his goal output are surely dispelled by a third Premier League season reaching double figures, especially as his strikes in the last eight days have been so vital.

12) The Van Dijk mistake was funny. He looked absolutely aghast that Nelson dared actually touch him. It encapsulated the complacency that has seeped into Liverpool’s wider game and perhaps even betrayed something of an arrogance on his part. Not that that’s a negative trait.

He acknowledged his error after the game, if not during it, attributing the pass to “a lapse in concentration”. Combined with Alisson’s for the second goal and Fabinho’s that launched a Nicolas Pepe attack in between, that could probably describe Liverpool since the Premier League returned.

13) Something bound to affect concentration levels is pausing within halves. Which might explain why Liverpool have now conceded eight goals after drink breaks compared to none before.

“It’s like a timeout. I wished for 20 years pretty much, nobody listened obviously! Now we have a drinks break and I like it a lot,” Klopp said earlier this month. He might just have changed his mind.

14) It was, of course, just one of those games. Sometimes the ball doesn’t fall quite right and the forces contrive to work against you. Slim margins begin to feel a little more plump and the result almost feels predetermined.

Only so much can be read into this and most other recent results from a Liverpool standpoint. But they cannot be completely dismissed out of hand. This was Swansea 1-0 in January 2018 and that is an infuriating habit they cannot afford to revert to.

To be honest (even with the league won) I never expected a Klopp team to play with such a lack of effort and intensity. Doesn’t sit well with me.

15) It also turns out Jordan Henderson might be quite important.

16) This is the kind of result that imbues a squad, a fanbase and an entire club with the kind of belief and energy that is otherwise difficult to manufacture. It is human nature to doubt and be sceptical and that impulse is only enhanced by football’s fickleness. Some soon consider potential to be a byword for ‘not quite good enough’. Others struggle to see the wider picture until it is fully shaded.

For a player and a coach to witness tangible effects of their tireless work is powerful. For supporters to share in that moment of clarity is intoxicating. For Arsenal to become the first team since April 2017 to go behind to Liverpool in a Premier League game and still win, something must be working. That bandwagon might get a little busier over the coming days.