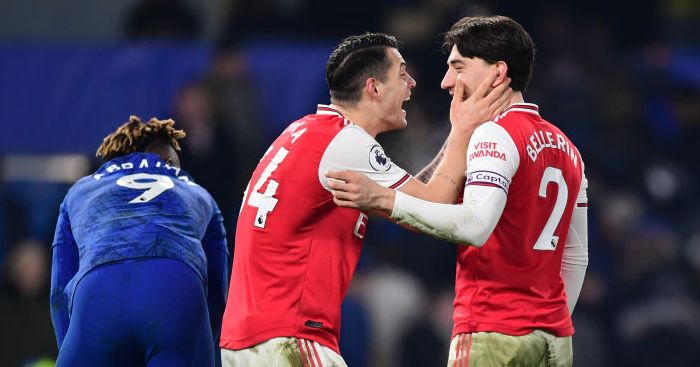 1) There are three things that all young managers need, according to the 2011 version of Sir Alex Ferguson. “A good chairman,” he noted, as well as “luck” and a willingness “to make sacrifices for the job, because this is an unremitting industry”.

With all due respect to Sir Chips Keswick, Mikel Arteta will be minded to remember that two out of three ain’t bad. He almost substituted Gabriel Martinelli in the first half, which would have unwittingly and entirely changed this game’s complexion. He could also have faced a team not petrified of their own shadow at home.

Which is not to say he did not earn this point. He absolutely did through his conviction and bravery. His explanation for not introducing Rob Holding in the first half to compensate for the loss of a defender was simple: “I didn’t want to send that message to the team.”

He reacted to the situation whereas Frank Lampard seemed to simply ignore it and proceed as before.

And as for those “sacrifices”, he traded the comfort of coaching Kevin de Bruyne and whispering sweet tactical nothings into Pep Guardiola’s ear for this utter madness. What a fool/genius.

2) In any ordinary circumstances, a manager winning just one of his first seven Premier League games would be cause for concern. But Arsenal do not do ordinary; they unfathomably emerged from this potential train wreck proudly bearing a few scars, a limp and steelier disposition.

The response to going a man and a goal down was excellent. The stubbornness to take the initiative and maintain a balance between searching for an elusive equaliser and not conceding again was admirable. And the ability to shoot themselves in both feet yet still walk away with a point was brilliantly ridiculous. It was neither the sort of performance nor result we would normally associate Arsenal with. Perhaps it’s time to reconsider those preconceptions.

3) Chelsea, however, cannot view this as anything other than another setback. They had every advantage imaginable – a lead, an extra man, a vociferous home support and no Shkodran Mustafi in their starting line-up – yet wasted the head start to trip over the line for a photo finish.

They were inexplicably tentative, almost unforgivable in the circumstances. Arsenal had more of the ball in the 15 minutes after David Luiz was sent off as Chelsea backed away from a bleeding carcass to the point of stupidity. They invited pressure and generated the sort of nervous energy which can make conceding the only two shots you face inevitable. It would be interesting to know if this was a coaching directive or something the players themselves simply could not control.

4) Roy Keane will be happy. Lampard, regardless of nationality, was exposed here. The reverse fixture was a showcase of his developing game-management abilities; this was the opposite.

His first substitution came three minutes after Arsenal’s initial equaliser, Chelsea having summarily failed to break down an already susceptible Arsenal defence that had been furthered weakened and contained Hector Bellerin, Mustafi and two midfielders. They were criminally passive and seemed content with guarding such a slender lead.

He evidently deserves more patience and at least one transfer window to imprint something – anything – on this confusion of a squad. But the questions are being asked at a rate he simply cannot answer right now.

5) Of course, to some extent you simply have to sit back and admire how a team can have 19 shots, score with two and get only six more on target. This was a failure of coaching but also implementation. Every Chelsea outfielder – and two of their three substitutes – had at least one effort on goal and all but one created a chance. That kind of wastefulness will only expediate plans to sign a forward player this month.

6) The only Chelsea starter not to lay on a goalscoring opportunity for a teammate? No, not Andreas Christensen. Forget about Emerson: he created five chances. Even Tammy Abraham took time out from impersonating Bambi to carve one out.

Willian, on the other hand, offered nothing. It was a complete vacuum of a performance that Callum Hudson-Odoi only exposed further on the other wing. The England international was not faultless but the application, variation and semblance of a threat was there. Willian was inconspicuous by his presence. Christian Pulisic has to take his place upon his return.

7) Most damning was that Hector Bellerin’s goal came down the wing the Brazilian eventually vacated. Arsenal’s right-back managed to avoid the blind alleys Willian constantly lost himself to provide a moment of stumbling inspiration.

Abraham and Emerson did approximately nothing to usher the Spaniard away from danger and Jorginho was too late to close him down. The finish was hardly convincing but it capped a promising first game back from long-term injury. As good as his stand-in has been, Bellerin’s return provides Arsenal with a different dimension and Ainsley Maitland-Niles with a chance to move central on a more permanent basis.

8) But no, Bellerin’s strike was not one that lends itself to blistering compilations set to a pulsating backing track. It was hit from outside the box with little more than moderate power and middling placement. It bounced twice before it went in.

Yet Kepa never seemed like he would save it. Perhaps Bellerin simply did the maths and relied upon the law of averages: the world’s most expensive goalkeeper has saved little over half (38) of the 72 shots he has faced in the Premier League this season. It’s almost a flip of the coin as to whether he keeps out any effort that’s on target.

Rudiger might well have obstructed his view the this time but there was a distinct lack of anticipation or preparation. Chelsea either need to appoint someone other than perennial third-choice Henrique Hilario as goalkeeping coach – if only they literally already employed Petr Cech and Carlo Cudicini – or give Willy Caballero the gloves for a period. The threat of complacency only grows if substandard performances carry no jeopardy.

9) Bernd Leno only magnified that particular gulf in quality. None of his saves were spectacular but that in itself is striking. The basics have to be done well to make those eye-catching moments all the more worthwhile.

And when these two sides met last month, it was the basics that let Leno down. History was not about to repeat itself – aside from the fact that this was the seventh time this season he had made six saves or more in a Premier League game. Arsenal’s defence should take no pride in that; their goalkeeper absolutely should.

10) Arsenal’s first goal, when it eventually did come, arrived through a route Arsene Wenger would have been proud of: an opposition corner. Mustafi’s clearance found Martinelli whose heavy touches were in stark contrast to his weightless finish. The Brazilian strapped Arsenal’s hopes on his back, raced past Emerson and N’Golo Kante and laughed in the face of Kepa’s proposed resistance.

It was a ruthlessness that is supposed to belong to Arsenal’s bygone eras, not this limp collection of players. To that end, Martinelli is a throwback of a forward who seems like an absolute nightmare to play against. Sort of like Luis Suarez but without all of the…baggage.

11) He only cost around £6million in the summer, too. It is that sort of value, identified through careful, painstaking scouting as opposed to lavish statement signings, that Arsenal could do with more of. You would think that such low-risk, high potential reward deals would appeal to the current hierarchy.

It is not that easy, of course. It just seems as though Arsenal should place a far greater emphasis on finding two or three players in the Martinelli mould as opposed to those with the experience of David Luiz.

12) Martinelli’s sheer force of will knocked N’Golo Kante to the ground. The Frenchman rarely looks flustered but was backtracking in the face of a tornado long before he lost his footing.

Kante might never have had such an underwhelming, ineffective and downright poor game on these shores. He completed one tackle and made no interceptions, his previous worst combined effort when starting this season having been three. And in the corresponding fixture at the Emirates he made seven tackles and one interception as part of an energetic and dominant midfield.

There is a discussion as to whether Chelsea should sell him. While the instinctive response is an immediate no, Lampard must find a way of harnessing – not harming – his best player.

13) He will point out that he probably shouldn’t have been the only player back defending from a corner at 1-0 up with half an hour left to play. Chelsea had precious little to gain from loading the box for what was their 11th of 17 either aimless or short corners.

This one was played to no-one in particular by Willian as Mustafi dominated the area to clear. Arsenal had scored within ten seconds of the German making contact with a defensive header in his own box.

After taking ten corners to no avail against Newcastle, questions have to be asked as to precisely what training-ground routine Chelsea are trying to replicate in-game. When an attacking corner is more hindrance than help, you’ve got a problem.

14) It was hardly atonement for Mustafi, whose contribution had long been forgotten in a haze of frenzied celebration. His overall response to the sort of mistake that can crush a player was impeccable, though.

Having spoken so eloquently about how “every little mistake” increases the sense of “pressure” and “nervousness”, and how an error “destroys everything that you did before,” it was a surprise to see him react so well after. Mustafi steadied himself, compartmentalised the moment and went about the rest of the game without putting a foot wrong.

Arsenal should still sell him, of course. His blunders are seemingly impossible to coach out and he makes at least one per match, which becomes difficult to account for at this level. There is a fine defender in there for a team who can absorb that risk. At Arsenal, it only exacerbates things.

15) In a similar vein, Granit Xhaka was quietly wonderful. He effectively shared much of that pressure alongside Mustafi when becoming an unorthodox centre-back midway through the first half. His passing – at a 91% success rate from Luiz’s sending-off until half-time – helped settle the nerves and reestablish foundations. The second half was more of an exercise in defending yet he remained faultless.

That took immense character. A man and a goal down, playing out of position in a hostile atmosphere, the scene was set for catastrophe. He and Arteta deserve immense credit not only for that performance, but his turnaround since the change of manager.

16) ‘Hostile atmosphere’ is something of a misnomer. Stamford Bridge on a Tuesday evening against a London rival should have been a difficult place to play but Arsenal asserted themselves with relative ease at times.

Chelsea’s home discomforts continue. Their lowest tally of home league wins in any season this century is 11. The Blues have won five games at Stamford Bridge this campaign and have seven left, with Manchester United, Tottenham, Everton, Manchester City and Wolves still to visit. They have beaten the teams in 11th, 13th, 14th, 15th and 16th on their own turf under Lampard, but sprint upstairs and lock themselves in their room when anyone bigger comes to visit.

That will have to be rectified soon. United and Tottenham make the undaunting trip in the space of five days next month. If both escape with at least a point then things might come to a head.