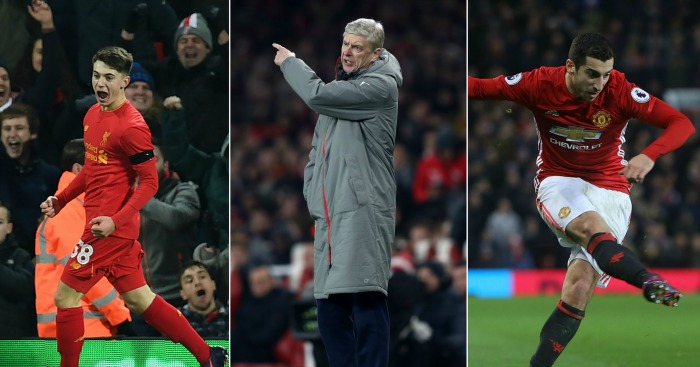 * Jose Mourinho used his programme notes to insist that Manchester United would soon click in attack and end a comparative drought in front of goal, and it took less than two minutes to see evidence for his defence. Wayne Rooney’s pass was excellent, Henrikh Mkhitaryan’s touch and backheel sublime and Zlatan Ibrahimovic’s finish never in doubt.

this mkhitaryan chap from the man united reserves looks quite a find. credit to jose mourinho for leaving no stone unturned

More than once Mourinho has insisted that Mkhitaryan has not been ready to take his place in Manchester United’s attack, but his display against West Ham makes that claim look disingenuous. There doesn’t seem to be anything wrong with his communication or confidence, and we already knew about his wonderful ability. The Armenian assisted two goals, created seven chances and was named the best player on the pitch.

I’m not going to apologise for stomping my feet like a toddler in tantrum mode, demanding that we get to see more of him in the Premier League soon.

* Another player answering his manager’s criticism was Anthony Martial, who scored twice and demonstrated the direct running and dribbling past opponents that made him so popular last season. Martial also scored more than once in a game for the first time since May (also against West Ham) and the first time at Old Trafford full stop.

It’s no surprise that United looked more exciting in attack with both Mkhitaryan and Martial on show, but we’ve seen precious little of them in tandem. Since the Manchester derby defeat on September 10, the two players have shared 29 minutes of pitch action. Can we finally see some more, please?

* The ‘didn’t fancy her anyway’ argument from Arsenal fans was both predictable and understandable. The League Cup has never been a competition Arsene Wenger has fretted over, and with good reason. A two-legged midweek semi-final in January comes after the busy Christmas period and before the Champions League last 16.

Still, being indifferent about elimination and angry at the under-performance need not be mutually exclusive. Nick Miller described Arsenal’s performance as that of a team playing as a punishment. They were wretched in defence and toothless in attack.

We have previously written about the new strength in depth in Arsenal’s squad after summer investment, but this was not an evening for Wenger to be impressed by his reserve options. Rob Holding, Lucas Perez, Carl Jenkinson and Kieran Gibbs all took steps further away from the first team, not nearer. The most senior player on show, Aaron Ramsey, was dire.

* Do not underestimate how good Southampton were, though. Claude Puel made eight changes to Wenger’s ten, but while one Frenchman was left scowling on the touchline, the other can dream of a visit to Wembley in his first season in England.

Avoid ‘doing a Rossiter’, and there’s some mighty fine examples for Ben Woodburn to follow…

* Woodburn is not the only young Liverpool player deserving of praise. In fact, he’s not even the one who merits the most applause, despite scoring his first senior goal and setting a record. Attacking players will always receive more column inches than defenders, but Trent Alexander-Arnold was superb on Tuesday. Having assisted Origi’s goal and looked assured at right-back, he was named Man of the Match by Sky Sports.

After the game, Jamie Carragher said he believes Jurgen Klopp’s decision not to buy a back-up right-back has been vindicated:

“We know now why Jurgen Klopp only went in with one recognised right-back this season – England’s first choice or second choice. Sometimes you just look at someone before you see them play and they look like a footballer. He just looks like a fantastic athlete, perfect for the full-back position. He’s only 18 so you think about how he’s going to look physically in three or four years’ time. He looks as though he’s already got the legs and the pace, and the strength is going to come.”

One great Liverpool right-back getting excited about the potential for another. What’s not to love?

* It was reported earlier on Wednesday that Hector Bellerin could return from his injury ahead of schedule, and Arsenal could do worse than investing in the world’s first house made entirely of cotton wool. Mathieu Debuchy started at right-back on Sunday before going off with an injury, meaning Carl Jenkinson started against Southampton. Bellerin’s absence makes the heart grow so fond it could burst.

I could write paragraphs on how uncomfortable Jenkinson looks against Premier League opposition, a mix of not quite being good enough for what Arsenal need and a constant rustiness caused by lack of competitive action. Instead I’m just going to sit here and repeat 1,000 times to myself: ‘Carl Jenkinson is an England international’. I suggest you do the same.

Kinda sad watching Jenks' cycle of every game he plays pushing him another rung further down the pecking order.

* Wayne Rooney was again excellent as Manchester United continue to feel the benefits of his part-time role, but a fine evening was undermined by the stupidest of bookings. There was no contact on Edimilson Fernandes and Mike Jones was wrong to award a free-kick, but screaming “f**k off” and waving your arms at a referee is liable to get you cautioned for dissent. Rooney can hardly argue punishment for that particular crime is not overdue.

The booking was costly, too. It was Rooney’s fifth of the season in all domestic competitions, meaning a one-game ban and his unavailability for the trip to Goodison on Sunday. Equalling Bobby Charlton’s goal record against his former club is now an impossibility. Shame, because he’s just rediscovering that spark.

* It might be an odd conclusion from the quarter-finals of a competition in which Tottenham were knocked out in the last round, but Danny Rose and Ryan Bertrand were two of the biggest winners of this midweek.

That’s because Bertrand scored in Southampton’s wonderful win at the Emirates, while England competition Luke Shaw and Aaron Cresswell both went off injured at Old Trafford and Kieran Gibbs was part of Arsenal’s shambolic defence and captained the team.

A nightmare evening for Shaw, however. Mourinho is clearly not fully convinced by the left-back, leaving him out of the squad for the league game on Sunday, and muscle injuries aren’t going to help. Let’s hope it was just precautionary.

* Having praised two young Liverpool players, a word of warning for one of the established stars. Georginio Wijnaldum has hardly done anything wrong in Liverpool colours since joining, but we’re still left feeling slightly empty.

Part of the issue is that it’s hard to distinguish exactly where Wijnaldum’s speciality lies. Nine Liverpool regulars have made more tackles per 90 minutes, four create more chances, eight make more passes and six have more shots. Jack of all trades doesn’t have to be used as an insult, but that’s certainly the usual connotation.

Wijnaldum’s place in this Liverpool team is surely under threat when Adam Lallana returns, thanks to Emre Can’s form since returning to the side. That has led to three clean sheets in succession, and greater protection for the defence. Can as the tackler, Henderson as the passer and Lallana as the runner does have a comfortable feel to it.

* Adrian might be frustrated at losing his first-team place to Darren Randolph, but there’s no need to take it out on Ibrahimovic. The goalkeeper should have been sent off for his challenge, leg raised after the ball had gone past in frustration at conceding. Ibrahimovic was lucky to avoid serious injury from a colossal d*ck move.

* Rafael Benitez is doing a wonderful job in Newcastle as well as at Newcastle. He has invited in supporters, attended a huge range of community events and instructed the club’s players to be more approachable to supporters. His team are top of the Championship and heavy favourites to return to the Premier League, where they will surely be better equipped to survive.

That said, it’s hard to overstate just how strong this squad of players is for a second-tier club. Newcastle are not the big spenders that many Championship fans would have you believe (they made a profit on transfers this summer, thanks to Daniel Levy), but do have incredible strength in depth.

* In May I wrote a piece about the way in which Hull City supporters had fallen out of love with their club during the ownership of Assem Allam, ending in thousands of empty seats at Wembley for the play-off final victory over Sheffield Wednesday. If you aren’t going to be motivated by Wembley, you aren’t going to turn up for a League Cup quarter-final at the KCOM Stadium.

The official attendance for the tie was 16,243 in a stadium that holds 25,400, with the away end sold out. Newcastle applied for more tickets, but Hull understandably didn’t want the away support to create an intimidating atmosphere for home players. Instead, the atmosphere was as flat as the game.

There is no quick fix to Hull’s problems; the bridges burnt between club and fans will not heal until Allam leaves the club. Yet for their semi-final home leg, a PR exercise (which probably equates to selling tickets on the cheap) is required if the empty seats are to avoid again becoming a national news story. The message from supporters is simple: The Premier League is only the promised land for supporters as well as the bank manager if you’re not being treated like faceless customers.

* This week I wrote the top ten on the best players in the bottom half, and there are always deliberations over those to omit. This week, Nos. 11 and 12 were Stoke’s Jack Butland and Hull’s Robert Snodgrass.

Having missed almost all of Hull’s last Premier League season after a dislocated kneecap required surgery and extensive rehabilitation, Snodgrass is making up for lost time. He is comfortably his side’s best player.

Snodgrass scored Hull’s equaliser against Newcastle, his sixth goal of the season. In the Premier League he ranks in first or joint-first position within Hull’s squad for goals, assists, shots on target, chances created and dribbles completed. Basically, they’d be seven sorts of buggered without him.

* Saying anything positive about Leeds United is a dangerous business, liable to stir Massimo Cellino into doing something ridiculous and plunging the club back into civil war. It’s as if Leeds are so used to uncertainty that they have developed a bizarre Stockholm syndrome to crisis.

So it’s with some trepidation that we watch Garry Monk slowly rebuilding both his reputation and the reputation of his club. He has a young squad (their XI was actually younger than Liverpool’s on Tuesday) and has led the club to four wins in five league games and fifth place in the Championship table. At Anfield, Monk’s team more than held their own until Divock Origi’s opener.

Cue four defeats on the spin, Monk’s sacking, another takeover failure and Cellino renaming Elland Road the Cellino Palace for a laugh.

* Of those young Leeds players, none has as much potential as left-back Charlie Taylor. Comparing him with Alberto Moreno was embarrassing, but only for everybody’s favourite calamitous full-back.

Taylor, meanwhile, looks the business. No player on either team created more chances on Tuesday evening, only one attempted more crosses and one won possession more times. The left-back’s intent to be an attacking threat as well as defensively solid despite being tasked with stopping Sadio Mane was commendable. Mane was kept quieter than he has been in any Premier League game recently.

As with every young Championship player, the question is how long Leeds can hold on to Taylor? Liverpool are just one of a number of clubs previously linked with a move, with Leicester, West Brom and even (slightly ridiculously) Manchester United mentioned. Good old Daily Star.