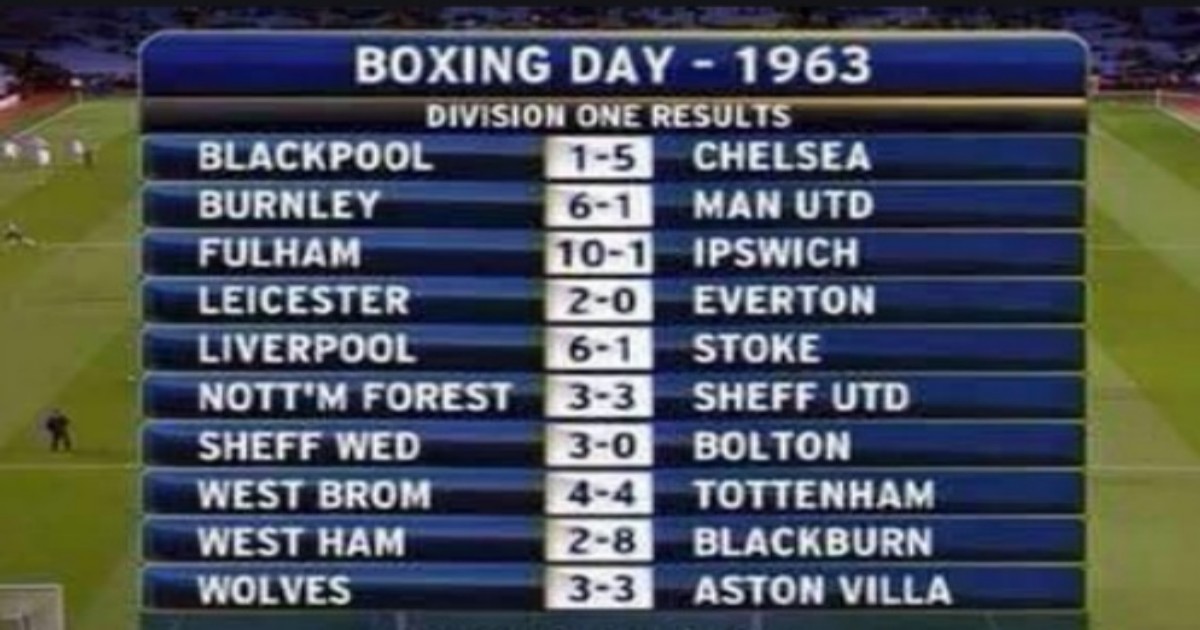 Liverpool look like proper title contenders. But Matt Busby is in danger at Man United. Where is that George Best lad?

1) This is approaching a genuine crisis for Manchester United. The FA Cup final win over Leicester seven months ago affords Matt Busby perhaps a little more leeway as he continues his painstaking rebuild of this famous club in tragic circumstances. But it is difficult to see how the Red Devils recover from a 6-1 defeat to Burnley: the Clarets’ biggest win since last March.

Rarely before has a team looked quite so bereft on their travels. United have lost four of their last five away games in the league, that hard-fought victory at Bramall Lane the obvious outlier in a sea of performances ranging from average to disastrous. Too often they concede the first goal and thus cannot possibly hope to come back.

The aggregate score from their last five away league games is 17-3. And these are comfortable defeats at the teams currently in 7th (Everton), 15th (Wolves), 17th (Aston Villa) and now 8th in Burnley. They cannot hope to build a title challenge on these foundations.

2) Quite why promising teenager George Best started against West Brom in September and has not even made a first-team bench since is a mystery; he’d be better off out on loan. United struggled to create much of anything before Pat Crerand’s late dismissal, with Bobby Charlton’s woeful form seemingly set to continue into yet another month. He scored four goals in United’s opening six games but none since outside the Cup Winners’ Cup. Someone like Best would at least offer something different but Busby seems reticent to trust youth, even when it comes so incredibly highly rated.

3) A word for Burnley, who were sensational. Andy Lochhead took his goal tally in the league from two to six for the season in a single afternoon, while Willie Morgan opened his account with a couple in the second half.

After defeat to Sheffield Wednesday five days ago, Harry Potts needed this. Burnley are now level on points with the team they vanquished with such ease, below them only on goal average even after such a mauling. The First Division champions of 1960 and runners-up in 1962 might yet have plenty to celebrate come 1964.

4) But it will take some doing to topple Blackburn, whose 8-2 thrashing of West Ham sent out the sort of message few could ignore. A hat-trick each from Andy McEvoy and Fred Pickering tore through the hosts, who levelled in the tenth minute through Johnny Byrne but were thoroughly outclassed thereafter as they suffered the heaviest home league defeat in their entire history.

The Ron Greenwood gamble might simply have backfired. It bears repeating that this is his first senior job in management after spells with various England youth teams and as assistant to George Swindin at Arsenal. A finish of 8th in his first full season was a fine effort but they came 12th last campaign and are currently locked in the bottom-half stasis of 16th. Perhaps only a trophy – the FA Cup, say – can save him. But that spine of Bobby Moore, Martin Peters and Geoff Hurst hardly feels conducive to tournament success.

5) There is no real threat of relegation, such is the plight of both Bolton in 21st and rock-bottom Ipswich. Sheffield Wednesday eased past the former with a 3-0 win; the latter fared a little less well by losing 10-1 to lowly Fulham.

The Tractor Boys beat Burnley on the opening day but that has proven to be the falsest of dawns, as did the 3-2 win against West Ham on the 20th that ended a 21-game winless league run. Ipswich were crowned champions of England 18 months ago but Alf Ramsey has moved on to the national team and left Jackie Milburn to pick up the pieces all the way down to Division Two. They are gone. But at least chairman John Cobbold’s reaction suggests he has retained his sense of humour, noting: “It could have gone either way, until the match began.”

6) Not that Fulham deserve anything but unqualified praise for such a remarkable victory. They spent Christmas Day in 16th and somehow still reside in the bottom half, albeit finally having scored more goals than they have conceded: 35 to 34.

It was a delight to see Bobby Robson register his first goal of the season as Maurice Cook and Alan Mullery ensured the scoreline more than crossed into ‘got in on the act’ territory. Bobby Howfield only joined in November but helped himself to three at the Cottage. Joe Broadfoot did everything but score; he was worth every bit of the standing ovation.

Yet the afternoon irrefutably belonged to Graham Leggat and his three-minute first-half hat-trick. It is difficult to see that mark ever being beaten; it is easy to envisage plenty more double-figure top-flight thrashings if a team not too good to declare themselves safe just yet can hand them out so readily.

7) There should be a particular word for scoring in the third minute and boasting a two-goal lead on three separate occasions but still contriving to draw to a team in mid-table during a title challenge. Perhaps it could involve Tottenham in some way in homage to their 4-4 stalemate at West Brom. Who knows. I’m spitballing.

8) Seriously, though. Bill Nicholson will be furious with his players for their laughably poor game management. Tottenham led 4-2 at The Hawthorns with 21 minutes remaining and were on course to stay level on points with Blackburn at the summit. They still have two games in hand on Rovers but even the slightest setback feels significant with Liverpool coming into some solid form.

Even with Jimmy Greaves adding his 17th and 18th goals of yet another sublime season he is being let down by a defence that is conceding almost twice per game. Greaves alone is often brilliant enough to mask those flaws but afternoons like these suggest he needs much more support.

9) West Brom earned a point that keeps them 11th, made all the more remarkable when you consider ten of their players were on strike little over a fortnight ago due to Jimmy Hagan’s training methods. Bobby Hope was the only member of the revolting dectet not to start against Tottenham after handing in a mass transfer request because of literal Baggies’ trousers: the manager had insisted they train in shorts instead of tracksuits during the inclement weather.

The rebellious John Kaye scored the first and insurgent Clive Clark the second before mutineer Don Howe, who missed a first-half penalty, capped the comeback in more than one sense. West Brom reached a resolution just in time to barely maintain a promising unbeaten run.

10) Liverpool 6 Stoke 1 is the sort of scoreline that won’t possibly be avenged for at least half a century. Four goals from Roger Hunt continues to prove that his debut First Division season was no flash in the pan, while the forward assisted both Ian St John and Alf Arrowsmith’s strikes in a breathtaking all-round performance.

Combine his excellence with a ludicrously resolute Liverpool defence and Bill Shankly has cause for quiet optimism. They have conceded at least eight fewer than any other side and to labour the previous point, their goals against column is a full 20 healthier than Tottenham’s after as many games.

11) The Reds are 3rd but they might actually have the title advantage. While Rovers and Tottenham both play in two days’ time, Liverpool now have 16 days to wait until their next league game. It seems as though they constantly receive favourable treatment when it comes to fixture scheduling, particularly over the festive period. There will certainly be no complaints from within Anfield.

12) Few managers can claim to be doing a better job than Tommy Docherty. Chelsea have acclimatised incredibly well upon promotion to the First Division, a 5-1 victory at Blackpool extending their current unbeaten record to eight games.

Credit to the Stamford Bridge hierarchy for giving Docherty the time necessary to recover and rebuild after relegation. It is refreshing to know there are clubs and owners out there that don’t treat managers like interchangeable commodities that should be readily disposed of at the earliest opportunity. Chelsea really are different.

13) It might not be pure happenstance that Chelsea’s form has coincided with the promotion of Terry Venables to first-team captain. His goal capped proceedings at Bloomfield Road neatly. The 23-year-old has the aura of a natural leader; perhaps a career in management and conflict resolution during one particular summer 30 years or so from now beckons.

14) On the other hand, Chelsea teammate Eddie McCreadie has a future as the bus driver for a fictional small island community off the west coast of Scotland.

While we’re on Chelsea, expecting supporters to travel to Blackpool on Boxing Day is a nonsense. It is little wonder theirs was the lowest attendance of any game at just over 17,000. Hopefully the fans will actually be prioritised in situations like these for years to come.

15) Everton might be better off conceding defeat in their quest to defend the title. Stoke and Manchester United are the only teams they have beaten in the league since the start of November – both at Goodison Park – as Ken Keyworth sent Leicester fans home from Filbert Street happy with two unanswered goals.

Gordon Banks was in imperious form once against for the hosts. The 25-year-old remains one of just three keepers to maintain a clean sheet against free-scoring Liverpool, and of the others, neither Nottingham Forest’s Peter Grummitt nor Alan Hodgkinson of Sheffield United have done the same against their Merseyside cousins. The Toffees scored two against the former last month and four at home to the latter in October.

So Banks stands alone. After making his England debut in April and starting six of the last seven games under Alf Ramsey, he seems to have quietly established himself in the national team picture ahead of Ron Springett, the reward for unerring top-flight consistency at Leicester. It does feel as though he’d struggle to keep Pele out but that’s beside the point.

16) The final mention goes to one of two 3-3 draws: with apologies to Wolves and Aston Villa’s six-goal classic at Molineux – 0-0 at half-time – the topsy-turvy clash between Nottingham Forest and Sheffield United was that bit more compelling.

The hosts took a commanding lead at the City Ground, Ian Storey-Moore, Geoff Vowden and Frank Wignall all scoring without response. The Blades, three down at half-time and having lost five of their previous six games, would have been forgiven for calling it a day. But Mick Jones gave them hope with two goals soon after the restart.

The comeback was complete when Len Allchurch converted from the spot. But when did two-footed tackles from behind become outlawed? The sooner technology is invented that allows officials to stamp out such blatant mistakes, the better football will be for it.