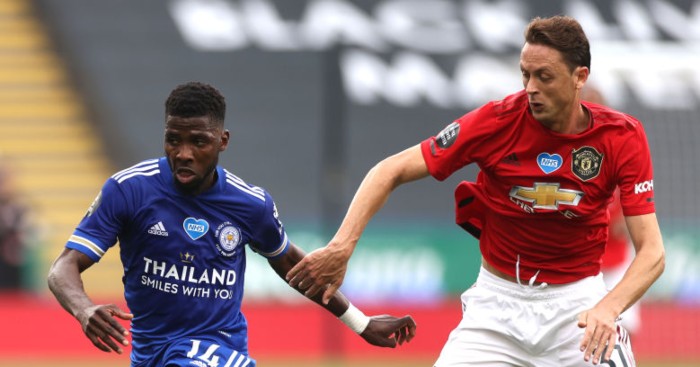 1) This was important for Leicester. Yes, at the beginning of the season they would have taken this situation heading into the final round of matches, but finishing fifth in a three-horse race is the kind of collapse that stays with players and which can form an unhelpful narrative over the long term.

It will be a scarring experience and it will take some getting over.

2) As it will for Brendan Rodgers. Whatever his achievements in Scotland are deemed to be worth, in England he remains a nearly-man whose best season in the Premier League culminated in one of the most famous collapses in the competition’s history. There’s an awful lot more to him than just that and he’s certainly tempered the more mockable parts of his personality in the years since, but this feels familiar and he can’t just recuse himself from what happened in 2020, or wave it away as a product of a bad injury list or misfortune.

3) Paul Pogba on Kelechi Iheanacho: Penalty. He stepped across him and made no attempt to play the ball.

This is one of the (many) problems with VAR. Because of the ‘clear and obvious’ dynamic, the benefit of the doubt will always be given to referees who fail to make a decision. Unless it constitutes a truly appalling mistake, it then creates a situation in which fouls that would have been awarded under the old system are allowed to go unpunished.

4) The next frontier in Iheanacho’s game is knowing when to release his passes. He hasn’t turned into the kind of player he was expected to, but there’s still plenty to like. He carries possession nicely and he’s technically good enough to beat defenders, the only problems being that he isn’t a reliable finisher, nor does he choose the right option once he creates space for himself.

His break from midfield after 24 minutes captured that second flaw: he showed good pace to get away from Pogba and also protected the ball well, but with Jamie Vardy begging to be played in beyond Harry Maguire, he delayed for far too long before scuffing that useless shot through to David de Gea.

Quicker, quicker, quicker. If Vardy had received that ball where and when he asked for it, Leicester would have had the lead they thoroughly deserved.

5) And again in the 33rd minute. In that instance the supporting runs weren’t quite right for Iheanacho, but there was a better result to be had from that move than Tielemans’ dribbled shot past the far post.

Iheanacho does a lot of things well. If he could just get rid of that tendency to dally then he’d be a really productive foil not just for Vardy, but any Leicester player getting up to and beyond the defensive line.

6) While we’re on Tielemans, how good actually is he? He’s an attractive player and he strikes a nice dead ball, but he hasn’t really been the same player since making his loan move permanent.

His career is interesting. And suggestive, too. When he left Anderlecht, Monaco were the only major European club to pursue him seriously. Then, when he left Stade Louis II, Leicester were given more or less a clear run at signing him, despite his reputation and a glowing highlight reel.

It implied a red flag and this lack of consistency might be what warned so many clubs off.

7) What a rotten first half from Manchester United. Fatigue is a factor for all teams at the moment and United’s rhythm was conspicuous by its absence against West Ham. That was the performance of a tired team and this was probably worse.

It’s a question for another day, but Solskjaer’s future will likely depend on endowing his side with a few different dynamics, because when his wide forwards aren’t able to catch their opposition up the field and when Rashford isn’t able to successfully drop that long pass over the top of the defence or combine dynamically with Bruno Fernandes or Anthony Martial, there really isn’t much life or potency to them.

That might very well be down to the situation and the cumulative effect of having to play so many games, but Leicester have had to endure a long journey too and, for 45 minutes at least, they looked like the better (coached) team.

8) Manchester United may want Jadon Sancho, but their priority should really be a first-rate defensive midfielder; that’s the position they should be spending between £50m-£100m on in the summer.

Nemanja Matic is fine. He’s adequate. But he’s only good enough and while Manchester United have the resources to significantly improve that area of the pitch, it would be reckless not to take the opportunity.

9) Matic struggled against Iheanacho. The latter’s profligacy made that irrelevant to the result, but he did continually find space in United’s half and so it was a surprise to see Rodgers replace him.

Maybe an overthink? You’d say so. Manchester United were frail through the middle and Ayoze Perez’s introduction directed Leicester’s focus away from that area and out to the flanks. They never looked quite as threatening again.

10) Matic has a problem, though. The future of this midfield is the Fernandes-Pogba relationship and – logically – that will need to be complemented by a third player who fills the holes they leave as they roam.

Additionally, the trend in his position is for a more technical player and someone equally adept at receiving the ball from his defenders as he is at finding gaps between the lines. Even at his best, Matic was never that player and you wonder whether his limitations with the ball are partly to blame for United’s regular drops in temperament.

It’s antagonistic, but still a comparison worth making: Liverpool are likely to sign Thiago Alcantara in the coming weeks and there’s a technical chasm between him and Matic that should worry everybody at Old Trafford.

11) One more point on the Sancho interest. On the basis of what Mason Greenwood is likely to become, how does spending that kind of money on a player of similar age and profile actually makes sense?

If he were to join, Sancho would play – for that kind of fee, he’d have to. But at the expense of whom and at what kind of opportunity cost elsewhere?

12) And it was Greenwood who changed this game. Manchester United created almost nothing for 70 minutes, until his pressing forced the mistake which let Martial in on goal.

‘Forced’ might be a little generous, because it was an awful sequence from Leicester’s perspective, but it was a moment Manchester United needed and Greenwood’s energy helped to ensure that Hamza Choudury didn’t get away with his mistake.

13) And, yes: penalty. There was a suggestion that Jonny Evans got a touch of the ball, but by no measure was that clear enough to overrule the original decision.

14) United’s next steps are very important. In the context of what came before, this season has now been a success. If the club are to start achieving again in a real, rather than relative way, the benefits of Champions League football have to be accentuated over the coming months.

That means responsible spending in the right positions. That means football taking precedence over commercial interests. Most importantly, that means a sporting director.

15) This is failure for Leicester, no question. There are no arguments to be made about inferior budgets or Manchester United’s comparative wealth; the hard truth is that they had a huge advantage and they blew it. After 18 games, they were 14 points ahead.

Ultimately, this game would prove an unwitting emblem for their season: they had the better chances, often played the better football and yet, when it mattered, there were the familiar mistakes and miskicks which have summed up their last seven months.

Mentality has been a theme. Originally, that was in reference to their repeated failure to perform to expectations in games against top-six opposition. Now, with so many disappointing results in their recent past, Leicester just seem fragile.

Or even young and naïve. Maybe that’s what needs addressing? Rodgers has been hamstrung by injuries, but perhaps the right response over this truncated off-season will be to target the side’s character. Youthful, talented players are good, but only of so much value if they’re not anchored by more dependable characters.

Who’s the 2020 version of Esteban Cambiasso? Get him on the phone.