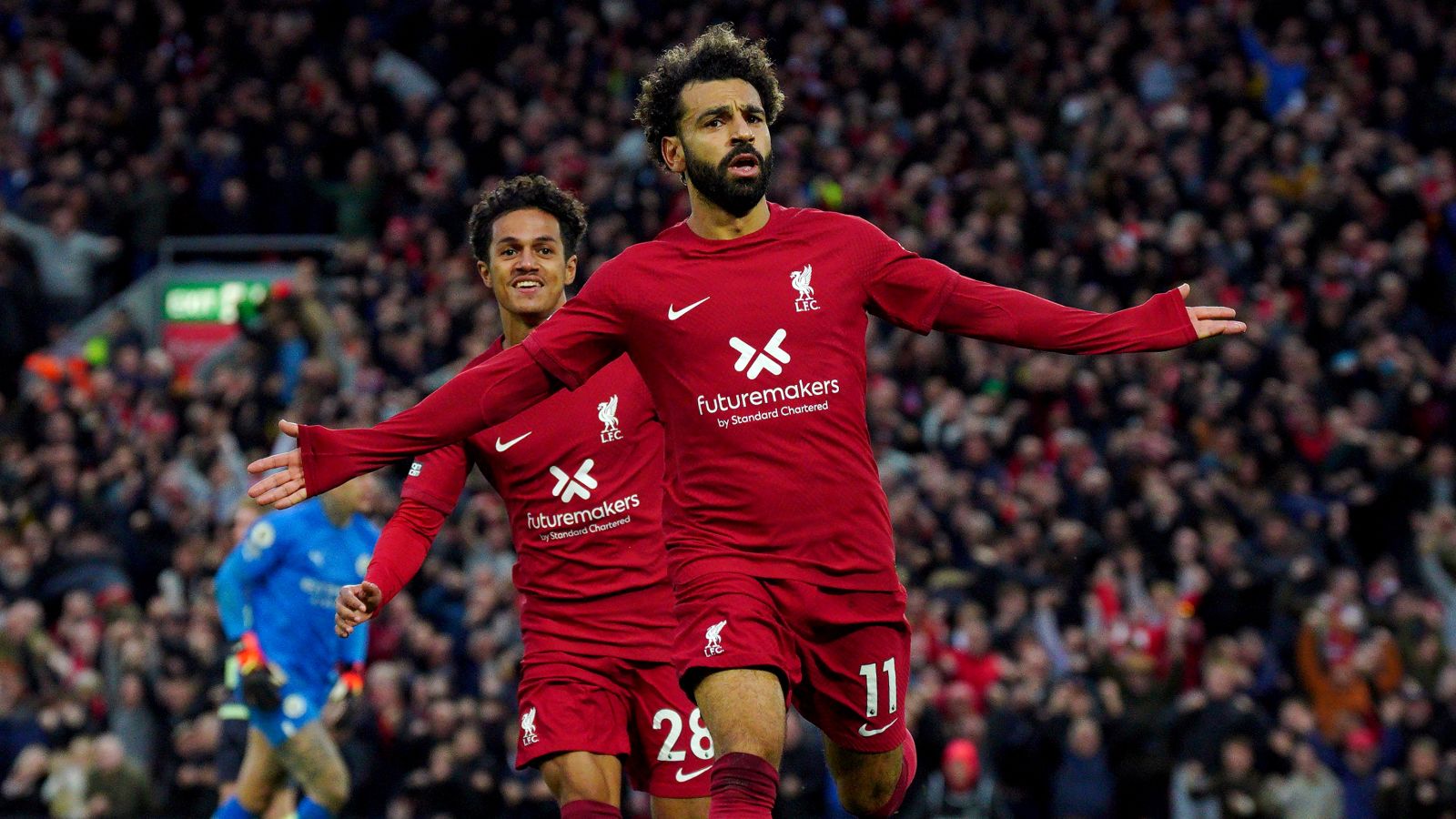 Salah was the matchwinner, Gomez, Van Dijk and Milner the match savers as Liverpool end Manchester City’s unbeaten start in a Barclays classic.

1. Let’s start with the obvious. This was just an absolutely brilliant game of football between what today still looked, despite what the league table or the last couple of months or Arsenal might have to say about it, very much like the best two teams in the country. Certainly it’s hard to imagine any other fixture in the league producing the heady mix of elite quality and riotous entertainment we got here.

The real beauty of clashes between these sides is you don’t get a hint of that thing that sometimes happens when two truly great sides meet and end up cancelling each other out. Styles make fights, as the saying goes, and Liverpool v Manchester City just… works. The first half built the suspense nicely; it was tense and technical and tetchy in parts yet at no point did you have any doubt the second half was going to be great. And the second half was really, really great.

2. The crucial moment, in which the game’s only goal was scored by the player who deserved it most, came three minutes after his afternoon’s work appeared to be over. It seemed baffling when the number 11 went up as Jurgen Klopp opted for a triple substitution to perk Liverpool up as City threatened to at last gain control of the game. Mo Salah had been by far Liverpool’s best and busiest attacker and the likeliest deadlock-breaker. Unless there was an injury, removing him was a madness. Luckily, Klopp was apparently as baffled as anyone else and the mistake was rectified.

3. And soon after came the pandemonium of that brilliant winning goal. It was a wonderful thing. Simple in one way (Alisson, Salah, goal) yet full of intricacy and explosive pace and then the composure of the finish. The spin that took Salah around and away from Joao Cancelo as he attempted to nick the ball away was so good. It made Gary Neville do a noise, and you always know something good has happened if it makes Gary Neville do a noise.

As a neutral, you found yourself hoping he would score because that pirouette quite simply needed a finish to match it. And Salah, who had been spectacularly denied by Ederson with a previous one-on-one chance, gave City’s keeper no opportunity this time. An atmosphere that was already absolutely fizzing reached a fever pitch where it would remain for the rest of the match and quite possibly still is now.

Also worth noting the source of Liverpool’s goal was an unforgivably dreadful Manchester City free-kick floated harmlessly into the box for Alisson to gather and set Salah away. Another pre-assist for Kevin De Bruyne’s collection there.

4. City had earlier thought they’d taken the lead when Phil Foden lashed home from a tight angle as Erling Haaland pounced on a ball Alisson never quite managed to get under his control. The Liverpool keeper wanted the goal disallowed for an offence against him – which seemed optimistic no matter how liberally the Extra Protection For Goalkeepers rulebook was deployed – but there was a clear foul by Haaland on Fabinho earlier in the move and the goal was rightly disallowed. VAR working properly, and ratcheting up the excitement more than even a goal would. There were video technology issues elsewhere today, but this was VAR at its best.

5. Pep Guardiola’s response to this setback was very, very funny. In such a high-calibre and high-octane match it’s vital to have moments of light relief, and Guardiola delivered here in fine style by waving his arms around in front of the Liverpool fans while conspiratorially repeating the undeniable fact that “This is Anfield”. The undertones and implications here were not particularly subtle or concealed, but they were also a nonsense. The shirt pull from Haaland was really quite clear. Please, can we all just stop believing everything is part of some sort of conspiracy? These days, if you pull a Liverpool midfielder’s shirt so hard he falls over at Anfield, you’ll be arrested and thrown in jail.

6. Not to be outdone in the managerial antics stakes, Jurgen Klopp then managed to get himself sent off for screaming right in the passing linesman’s face after what did admittedly seem a very obvious foul on Salah wasn’t given. There was pretty much no way Klopp was ever going to get away with that kind of nonsense, though, no matter how righteous the cause. As he admitted after the game as well.

But was it not a bit weird that the referee stopped the game while City were on the attack to send off the opposition manager?

7. Before VAR’s intervention, it looked like we’d just seen the game’s defining moments because just before City’s ‘goal’ came Ederson’s brilliant fingertip save to send Salah’s shot just the wrong side of the post. It was a superb piece of goalkeeping in both the athleticism of the save and the positioning that gave Salah so few options. That Salah still appeared to have found the right one was testament to how good a game he was having. Ederson’s save was so good that the referee didn’t even spot it and awarded a goal-kick, leaving it with the quirky distinction of being one of the best saves of the season but not technically being a save. Can it still win save of the month or season awards? We must be told.

8. This Liverpool formation is generally described as 4-2-3-1 but it really does look an awful lot like a good old-fashioned 4-4-2 to this layman’s eyes. And if there was a one at the head of the formation today, it was Salah rather than Firmino. Whatever you want to call the shape Liverpool adopted, there has clearly been a concerted effort to move Salah more central literally and figuratively. It’s hard to think of a Liverpool attack where he wasn’t involved.

9. Salah wasn’t the only Liverpool striker to catch the eye, though. We’re becoming huge fans of Darwin Nunez and the chaos he brings. His performance off the bench here was perhaps best described as eccentric, fluffing one really good chance to make it 2-0 in the closing stages but most memorably making a complete bollocks of a three-on-one breakaway by going for goal himself when Salah had, in the words of Big Ron Atkinson (not those ones), “gone empty” at the back post and was screaming for the ball.

Nunez could be forgiven for not hearing Salah – it was pretty noisy by this point – but not seeing him seems pretty inexcusable. In fact, we’re having a hard time deciding which is worse: Nunez seeing Salah or Nunez not seeing Salah. If he saw him and didn’t play the pass, that’s ludicrous. But an £85m striker who doesn’t look up might actually be more damning.

10. Let us also take a moment here to appreciate the cross Salah teased and arced into the danger area with the outside of his left boot that really should have been headed home by Diogo Jota, not least because Ederson was at that point still visibly struggling from a smacked foot in the aftermath of the brilliant unnoticed save. Anything on target would have done the job, but instead Jota rounded off the most intense, the most quintessentially Barclays, five minutes of the match by heading over. From Salah’s chance to that miss via City’s disallowed goal was a heady mix of all Our League has to offer. Men. At. It.

11. If Salah was the matchwinner then Liverpool were equally indebted to a whole host of matchsavers at the back. Alisson was quietly excellent throughout, as were the four men directly in front of him.

Joe Gomez and James Milner, forced into service at right-back, were particularly excellent. Milner remains capable of the most astonishingly good performances in what we assume must be the dotage of his Premier League career, but this may be his best Premier League display for an age. He was absolutely immense despite the genuinely fearsome task of playing out of position against what is currently the best attacking side in the world.

12. As well as Gomez and Milner there was a welcome return for the old Virgil van Dijk at the heart of Liverpool’s defence. That he probably didn’t have quite as good a game as those two is no criticism, and we can think of no other defender who would have made the headed intervention that surely prevented Haaland heading in from close range in the second half. Everything about it – the positioning, the anticipation – was elite. That’s now 69 Premier League games for Van Dijk at Anfield without a single defeat, a ludicrous record.

13. And yet despite Liverpool’s exceptional performance and victory, we come away more certain than ever that City are going to win the league. Because an exceptional Liverpool side played exceptionally well for almost 100 minutes of football and still on another day would have lost.

Liverpool defended magnificently, yet Haaland still had six shots and four of them on target. On most days, that’s two goals minimum. Even for a team of Liverpool’s quality playing this well, beating City requires so many other things to fall your way on the day. They really are an astonishing football team.

14. One thing Liverpool did that again is easier to note than it might be for other teams to replicate is effectively shut down De Bruyne. City simply couldn’t get him on the ball often enough in the right places. He was often too far forward and rarely in the positions from which he is able to wreak the most havoc. In the first half, De Bruyne had only 23 touches. That’s one more touch than Haaland, and we’re pretty sure that is rarely the City gameplan.

Things improved in the second half – albeit De Bruyne’s major impact on the game was his unwitting assistance in Liverpool’s goal – but he still saw far less of the ball than City’s other creators. Bernardo Silva and Phil Foden both had over 90 touches, while De Bruyne had just 55.

And yet, to echo point 13, he could still very easily have ended up with at least one assist for Haaland.

15. Time will tell how big a result this was for Liverpool, and there is clear evidence now from the last couple of games of a season reenergised at least. But it still closes the gap on City to just 10 points and they are still 14 points off top spot. The title is gone and while Liverpool’s season will now surely get back to something like we’ve come to expect from a Liverpool season, right now this did feel like a bigger result for Arsenal.

For all that Liverpool showed how good a side they still are, there’s a bittersweetness to it that it’s already too late for this season. Such are the standards City have set, such is the level Liverpool have had to achieve and it is remarkable how well and how long they’ve managed to do it.

This was a sensational one-off victory for Liverpool, but the fact its greatest positive impact may be felt elsewhere has to sting a bit. But that’s the truth of it: this was a remarkable day for Arsenal, which began with a curious long-delayed game at Elland Road in which large dollops of luck were ridden en route to three points and ended with City’s defeat.

16. And in another bit of Arsenal-adjacent news, City’s defeat also of course means we now have no unbeaten teams in this season’s Premier League. We’re only 10 games in, but The Invincibles are already safe for another season.

It also rather wonderfully means that since Liverpool beat Bournemouth 9-0 in August the only unbeaten team in the Premier League is, er, Bournemouth. Our League, eh? You just cannot beat it.