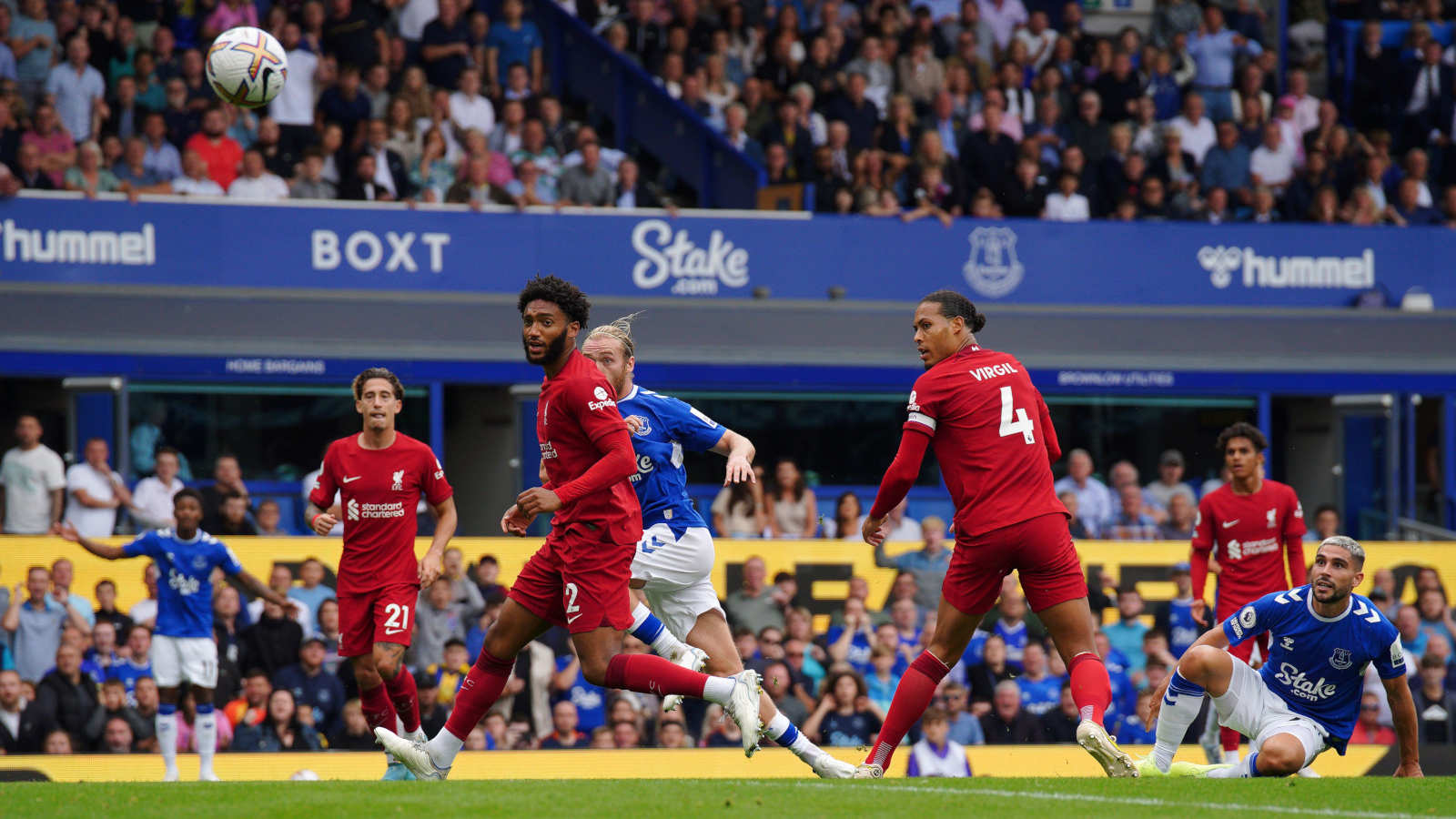 Everton and Liverpool played out a goalless draw in the Merseyside derby, a game won by two outstanding goalkeeping performances.

1. No sooner has the transfer window closed for the summer than the next round of fixtures is upon us, and this weekend kicked off with a Merseyside derby that couldn’t provide any goals, but will provide both Frank Lampard and Jurgen Klopp with plenty to think about.

Local derbies are different. Struggling teams can find inspiration from out of nowhere, while red-hot favourites can find themselves freezing under the intensity of the atmosphere.

And on this occasion, both times deserved a point, and it says a lot for the gap that has opened up between the two clubs in recent years that this represents progress for one of the teams and a cause of concern for the other.

2. This year’s Goodison Park Merseyside derby marked an ominous anniversary for Everton. On the 6th November 1982, almost 53,000 people packed in for the annual Merseyside derby, and what followed was calamitous, from an Everton perspective.

Ian Rush had already put Liverpool a goal up when Glenn Keeley, making his debut for the Toffees after arriving at Goodison Park on loan from Blackburn Rovers, was sent off for pulling Kenny Dalglish back as he ran through on goal.

Liverpool went on to win 5-0, with Ian Rush scoring four times, Keeley never played for Everton again, and the whole disaster was played out for the nation on that night’s Match of the Day.

Considering Everton’s dismal start to the season and Liverpool having picked up a little pace after a stuttering start, there will have been many expecting this lunchtime derby to end in a very similar way.

3. If you have to replace a shithouse, maybe it’s best to replace them with a shithouse. Everton were never going to be able to get a direct replacement for Richarlison, but the arrival of Neal Maupay from Brighton does continue their trend for having a player with the ability to wind up the opposition, if nothing else.

And Maupay brought about the best chance of the opening 20 minutes, a low ball across the six-yard area that an attack with more experience of playing together would likely have finished off.

On days like this, Goodison Park can be a place with an atmosphere bordering on frantic, and the sound of the crowd increased by several decibels with this close shave.

4. It is also worth remembering that sometimes, a player not leaving a club can be as galvanising as a new player joining. Anthony Gordon ended up not going to Chelsea, and his performance was a perky reminder of why Everton were so keen to keep hold of him in the first place.

He forced the first shot on target of the match, a side-footer that required a comfortable diving catch, and was also involved in the closest that we came to an Everton goal in the first half, winning the ball back inside the Liverpool penalty area for Tom Davies to hit the inside of the post after Neal Maupay’s shot was charged down.

Gordon was eventually replaced with eight minutes to play after another accomplished performance, replaced by Dwight McNeil, who within a minute and a half of his introduction had himself brought a superb save from Alisson with a shot from distance.

5. But broadly, the first half was scrappy and mildly chaotic. Saturday lunchtime games often play out as though the players haven’t properly woken up yet, and Merseyside derbies are often considerably more heat than light, so this wasn’t unexpected.

For all of that, though, Evertonian catastrophising about what might happen seemed mis-placed. Their shape was considerably improved, Maupay was troublesome, and Gordon was spritely, with good attacking support from another new arrival, Amadou Onana, and Tom Davies.

Defensively, Conor Coady, who made one appearance in the Premier League and one in the Europa League for Liverpool exactly a decade ago, looks like an excellent signing for his experience alone, while Onana was also imposing in defensive positions.

6. For Liverpool, meanwhile, the return of Darwin Nunez from suspension led to Roberto Firmino returning to the bench despite having scored three goals in two games. It took until almost half-time for Nunez to look like a real threat, a shot that took a deflection and brought a magnificent save from Jordan Pickford, tipping the ball onto the bar.

The England goalkeeper would go on to make further excellent saves in the second half with the score still tied at 0-0.

Within seconds, Luis Diaz, who’d played most of the first half as though made slightly skittish by the occasion, hit the inside of the post. Pickford’s save was a reminder of what an excellent goalkeeper he can be, and that in a game in which fine margins can count for a lot, that is a valuable asset to have on your side.

Half-time arrived goalless, but with the woodwork having been struck three times, this wasn’t for a want of trying.

7. But Liverpool’s reputation as slow starters remains undiminished. They dominated possesion throughout the first half, but those who were expecting ‘heavy metal football’ and a gegenpress so powerful it made the foundations of St Luke’s church shake were left disappointed, apart from the five-minute spell before half-time during which they rattled Everton woodwork twice.

Throughout much of the first half Everton were excellent, keeping their shape when not in possession, looking compact, and breaking fairly effective when they did break, but those last five minutes were a reminder of how much work they’d still have to do in the second half.

8. James Milner at right-back – brought about by a double substitution made by Jurgen Klopp as game hit the hour mark – was immediately targeted by Everton, but within three minutes of that change the home side did get a break on the opposite side, leading to a shot from Nathan Patterson which was deflected narrowly wide.

9. Firmino was introduced at half-time for Fabio Carvalho, another Liverpool player who’d had an anoymous first 45 minutes, and Liverpool did look more purposeful in the early stages of the second half as a result. But the second half started to become a duel between the two goalkeepers.

At one end, Pickford pulled off a string of superb saves in the space of a few minutes as Liverpool briefly piled on pressure, while at the other Neal Maupay broke through and brought a good block from Alisson.

Throughout the middle period of the second half the game swung from end to end like a see-saw, with chances at both ends as the game started to open up.

10. And you can’t have a Saturday of Barclays without the Premier League Fun Police (Technology Division) getting involved, ruling out a thick, juicy slice of narrative when it overruled Conor Coady’s goal from close range after Maupay had driven the ball low across the goal.

The goal was eventually ruled out, and under the current interpretation of the rules rightly so, but again, the question begs to be asked: there was a definite period during which the offside rules were tinkered when changes were supposed to benefit attacking players.

11. With three minutes to play, Pickford made another excellent save from Firmino, palming away a first-time shot to safety. It would have been harsh on Everton to have lost this game at the death, but even though Liverpool tried to turn the heat back on in the closing stages, it never really felt – in that way that it so often does when Liverpool are firing on all cylinders – as though pressure was building to an extent that a dam was going to break.

12. And even with six minutes of stoppage-time to play (on this occasion, a further several minutes were not added to it), Everton still looked plenty capable on the break. There was no sense all afternoon that Everton were digging in for a point, and neither should they have felt as if they should, considering the extent to which they’d matched Liverpool for much of the afternoon.

13. But right at the death, Liverpool nearly, nearly, nearly snatched it. Mo Salah has been absent without leave for much of this season for them so far, having failed to catch light in the way that he has in previous years. But in the fifth minute of stoppage-time he almost won the game with a low shot that Pickford stretched to push brilliantly onto the post.

14. At the risk of sounding like my knee is jerking in saying this, another two points dropped is now feeling like an escalating problem for Jurgen Klopp and Liverpool.

The maximum number of points that can be won in a Premier League season is 114. If we assume that Liverpool would need at least 95 points to finish above Manchester City this season – and it may well be more than that – they can only afford to drop 19 points over the course of the season, and they’ve now dropped nine points from their first six games.

So while it feels as though it should be ridiculous to be describing Liverpool’s title challenge as ‘over’ on the first Saturday in September, they have already burnt through half of the points they can afford to drop this season and it’s already starting to feel as though a championship challenge could already be slipping from view. This was not the performance of a title-winning team.

15. Have rumours of Evertonian incompetence been overstated? They do remain winless, but they’ve only lost two of their six matches so far and this draw lifts them to 14th place in the table, at least until ten to five.

Their biggest issue so far this season has been scoring goals, with just four from their six games, but they created chances in the Merseyside derby and the changes they’ve made to their attacking formation look capable of bearing fruit.

Neal Maupay isn’t a great scorer of goals, but he’s exactly the sort of needly, niggling striker they need if they are going to be involved in a scrap to avoid relegation this season.

But on the evidence of this performance, they have room to improve. They need to get that first win on the board, but there were definite signs that considerable improvements are coming.

It’s also worth briefly mentioning that Frank Lampard’s subsitutions were excellent. Lampard hasn’t quite managed to fully stamp an identity on this team just yet, but he will be pleased with the amount of character they showed against a team that was expected to beat them, and the performances of their new signings – in particular Amadou Onana – hinted there.

16. So while the Merseyside derby ends goalless, it’s a big win for the Goalkeepers Union. Both Jordan Pickford and Alisson were absolute outstanding, showing positioning, reflexes and agility to keep the score goalless.

For Alisson, this resulted in Liverpool avoiding a defeat that would have been considered a little embarrassing. For Jordan Pickford, this resulted in a draw which may boost the confidence of a team has been looking very low on that since the start of the season.

Goalkeepers will never fully get the credit they deserve, but on days like they they prove their value and both rescued a point for their teams from a match that was considerably more entertaining than the final scoreline would suggest.

Both managers may be a little disappointed. For Jurgen Klopp, this was another two points dropped. For Frank Lampard it was an opportunity to kick-start Everton’s season and record a bloody nose against their esteemed local rivals.

But on this occasion, the goalkeepers shared the spoils by cancelling each other out.