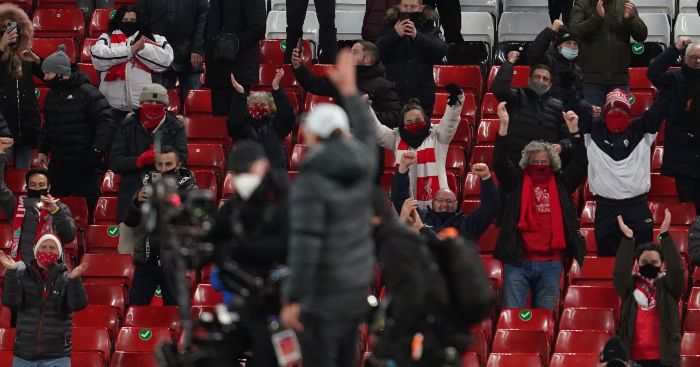 Liverpool proved why the title is theirs to lose. But Tottenham should be proud of their efforts.

1) It feels a little perverse to wonder whether Jurgen Klopp and Jose Mourinho were swayed by events elsewhere this midweek in the build-up to their meeting. Leicester, Southampton and West Ham dropping points would not generally be any business of theirs but the teams in 3rd, 4th and 6th – as well as Chelsea in 5th – either drawing or losing created a real opportunity for the sides in 1st and 2nd to establish some rare breathing space in this sprinting marathon of a season.

Perhaps it did not effect their approach in the slightest. But how refreshing it was to see two heavyweights try and bully opponents their own size in their own way. Liverpool tried to jab Tottenham into submission while the visitors were only interested in landing knockout blows. Both were aware of the possible reward; neither were fearful of the obvious risk. Either could have won. It took until the final minute for one to do so. It made for a very fun game.

2) It also provided proof as to why Liverpool should be overwhelming favourites to defend their title. With a Premier League debutant at centre-half and a teenager in midfield this was never going to be a resounding victory, and indeed it relied on a heavy dose of fortune. But their mentality is like no other. It might seem like a vague platitude but it makes a genuine difference when Rhys Williams and Curtis Jones can slot seamlessly into a team founded on such high standards.

The 3-0 win over Leicester and 2-0 victory at Chelsea were examples of how Liverpool can dismantle and demoralise their closest perceived challengers. This was a war of attrition against football’s greatest drill sergeant and they still ended up overcoming the enemy.

3) Those decrying Mourinho and revelling in a defeat for ‘anti-football’ are being wilfully obtuse. Tottenham came with a plan and almost executed it perfectly. A sharper Harry Kane or a more predatory Steven Bergwijn would have crowned a first Premier League away win at Anfield since April 2017 and few could have argued with that result.

Plenty will cite the 24% possession, the total number of balls into the final third, the fact Jordan Henderson attempted almost half as many passes as Tottenham overall. And perhaps he got the balance wrong in the first half, when Liverpool really should have made their dominance count. But Mourinho should take great pride and positivity from that performance. All it lacked was a little more precision and care in the final moment.

4) This is part of the deal, of course. Mourinho approaches these games in such a way that defeat in this manner is an inevitable trade-off eventually. At some point the ungodly accurate finishing reverts to the mean and the pressure finally tells on a defence with susceptible components.

The fact is that similar tactics have already worked to emphatic degrees against Manchester United, Manchester City and Arsenal. Mourinho took it a little too far against Chelsea at Stamford Bridge – personal motivation surely played a part – but this was a completely understandable way to play against a phenomenal team on a ridiculous home run. It’s just that sometimes Heung-min Son won’t be on the end of every opportunity, and excellent opposition players can conjure up decisive moments in stoppage-time when concentration levels have dipped.

Mourinho’s methods seek to ensure this calibre of game is settled by those fine margins; that gamble will backfire at times. He walks the line between disaster and masterclass like no other, but at the end of the day football can just be a bit stupid and we are all idiots for trying to find a grander meaning in every single game.

5) How the critics would prefer Mourinho to set his team up is a mystery. If Tottenham visited Anfield and try to out-pass Liverpool they would get destroyed. If they tried to dominate possession they would be picked off on the counter themselves and pressed into oblivion. Mourinho laid it on a little too thick in his pre-match press conference but there was a valid point hidden in the bluster: most of those Liverpool players have been together for years under the same manager while this Tottenham side, if not relatively new, have barely been working with their coach for 12 months.

They have played worse and won. They have played better and been beaten by more. A negative result does not necessarily mean a negative performance. His “better team lost” shtick was debatable but to brand tactics that almost held Liverpool to a draw as ‘anti-football’ is just plain wrong. And hilariously childish.

6) It is especially disingenuous when you consider Liverpool scored from a heavily-deflected shot and a set-piece. Most of their other chances were of pretty poor quality. The rest were hit directly towards the centre of the goal and into Hugo Lloris’ welcoming arms with unerring accuracy. This was no swashbuckling attacking performance.

The front three were profligate but Andy Robertson was sensational. The corner for Roberto Firmino’s winner ensured quantifiable reward for his efforts but even without it the left-back’s impact was obvious. It can take a quieter game from Trent Alexander-Arnold to realise just how proficient his teammate on the other side is; without Robertson, Liverpool do not win that.

7) The first shot on target actually mirrored the last quite well. It was a Robertson free-kick instead of a corner and Firmino’s header was saved by Lloris but Liverpool issued a warning Tottenham would have been forgiven for forgetting about 80 minutes later.

As obvious as it feels to praise the match-winner, he really was excellent. Some discussion in the build-up centred on how Kane had started to mimic Firmino’s role in dropping deep but this was the master of the art at his absolute best, the focal point around which Liverpool operated. Kane was barely noticeable for long periods and painfully off the pace when he did show up.

Firmino has scored the decisive goal in 10 of them – more than anyone else.

8) It was one of the Tottenham striker’s specials: four shots, none on target, 12 passes, no chances created. These displays come around once every few months – usually for England – but they do emphasise just how brilliant Kane usually is at maximising his moments on the ball. It is often taken for granted.

Again, though, that is the basis upon which Tottenham are founded. They will defend resolutely as a unit and rely on their elite forwards to perform at their absolute peak consistently. They did the former for most of this match and the latter only once. That was rarely going to be enough.

9) Kane was not simply poor. Nor was Son, who had one shot, dispatched it wonderfully and struggled thereafter. Liverpool’s centre-halves were formidable, if not faultless.

It was Williams whose missed header let Bergwijn in within a minute of the second half kicking off, but the 19-year-old was otherwise great. Having one of the best and most adaptable players in the entire league alongside him surely helped but it was Williams and not Fabinho who played the 40-yard cross-field ball out to Robertson in the build-up to Salah’s goal. That sort of distribution is what Liverpool have lacked since Virgil van Dijk’s injury and Williams nonchalantly cracking on with it should not be understated.

10) Fate cruelly dictates that he was not even Liverpool’s best academy product, as Jones was sublime. His one-touch passing, close control and persistence created the first goal, which the midfielder almost added to soon after when capitalising on Serge Aurier’s sloppy play in his own area. There’s a sentence I always thought I’d write.

Henderson and Georginio Wijnaldum went about their midfield business characteristically quietly and effectively. Yet Jones provides a certain different dimension to proceedings, particularly with his dribbling. It really is not normal how comfortable he looks in this team, under this manager, in this kind of game. Him not being capped by England really is quite funny.

11) The discourse around ‘typical Mourinho’ will also ignore the context of the first half, in which Tottenham were one better touch or crisper pass from racing through on goal.

The first such instance came in the 10th minute with Hojbjerg’s hopeful ball over the top. Kane could not quite bring it under control and that allowed Williams to nip in but Son would have been running through with Fabinho perhaps too far to his right if the touch had been better.

A few minutes later, an interchange between Son and Kane ended with Bergwijn being played in down the right but Alexander-Arnold came across well to cover, before another counter-attack saw Moussa Sissoko struggle to find Kane completely unmarked in the centre.

They had more obvious chances in the second half but there was no period in which Tottenham did not pose a threat to Liverpool. That latent danger just developed a little more after half-time, but it was there throughout.

12) And just after the half-hour mark, when Amazon Prime kindly cut away from an insignificant replay to show Son baring down on goal and finishing supremely well beyond Alisson. They were automatically in credit thanks solely to Ally McCoist but still.

Honestly, though, that finish was delightful. Few players have made Alisson seem so beatable in a one-on-one situation. Credit also goes to Giovani Lo Celso, who lost Jones for the opener but cut straight through Liverpool’s centre for this assist. But Son made it count; he really is one of the best forwards in world football and it doesn’t feel as though that is an accepted thing.

Since the start of his second season in England Son has scored 60 Premier League goals. His xG in that period is 37.39.

13) Is…is it alright to call Aurier good? There were two poor moments: his mistake that let Jones in in the first half and then being completely deceived by Mane’s turn before he hit the crossbar in the second. But he fared excellently against the Senegalese otherwise in what most would have described as a mismatch before the game.

The raw numbers were impressive enough. Ten tackles, two interceptions and five clearances is quite the shift for a player whose perceived strengths are in attack. By which I mean his manager was literally “afraid” of his “sh*t defending” not long ago. Aurier did not pass the Mane test with distinction, but a decent grade all the same. It is becoming a habit.

14) He was helped by some absolutely sensational defending by Anthony Taylor, who blocked Liverpool’s passing lanes like N’Golo Kante after a packet of Tangfastics. The referee surely had more touches than most Tottenham players; Henderson couldn’t bloody help but pass to him in the first half.

15) Liverpool found the winner but that should not take too much away from the ridiculousness that is not making a single substitution in 90 minutes. Klopp and Pep Guardiola seem to be trying to outdo one another in undermining their mutual argument that Premier League clubs need five subs to ensure the welfare of the players in these unique circumstances.

It’s a bit rich to pinpoint “a lack of leadership” at the FA and make snide public comments about Chris Wilder before asking eight players who featured for 90 minutes against Fulham on Sunday to do the same against Tottenham three days later. He is a brilliant coach but a bit of a silly sod sometimes.

16) Hahahahang this up in the ruddy Louvre.