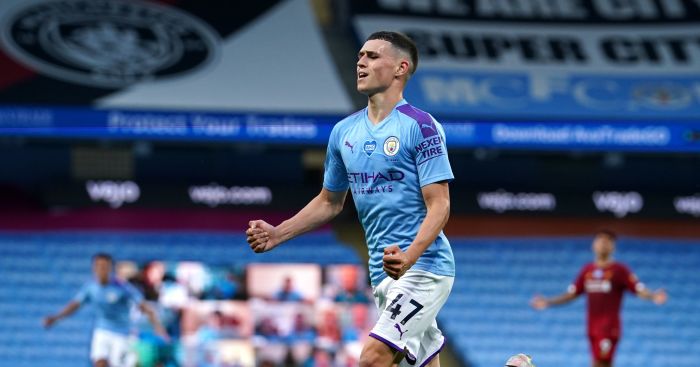 2. Fair play to Jurgen Klopp. The only prize on offer to Manchester City tonight was momentum ahead of next season and Klopp could have taken even that off the table by naming an understrength side. A Harvey Elliott here, a Curtis Jones there and, all of a sudden, the game would have had a very different look and significance.

But he resisted that urge. One to eleven, this was a proper Liverpool without an asterisk, without proper motivation and – superficially at least – without any excuses.

3. And good to see Pep Guardiola play Phil Foden in a game of consequence, and in this more advanced role which increasingly seems like it might become his permanent home.

One of the theories about Foden is that City are too good to facilitate his development. That in the situations in which he’s typically used, their superiority is such as to provide no sort of useful context. Who knows if that’s right, but it sounds logical enough, and so seeing him in this kind of game – dead rubber or otherwise– felt like it actually served a purpose and a function.

5. Penalty? Initially no, then yes. The first bits of contact were fine, because that was the kind of standard penalty box grappling that referees pretend not to see. But after Sterling had shifted the ball out of his feet and created an angle to cross or shoot, Gomez kept hold of him, denying him the opportunity to exploit the space he’d manufactured.

He probably did go down quite easily, but the game has created a situation whereby players feel the need to do that to get the decisions to which they’re entitled.

6. Gomez was culpable again for the second. He was left exposed as that move unfolded, finding himself one-on-one with a player capable of shifting and shooting with lightning speed, but Sterling was only scoring in one way and Gomez failed to protect that route to goal.

In the grand scheme of things, it wasn’t a big deal – it barely warrants a conclusion – but, while obviously talented and deservedly Virgil van Dijk’s first-choice partner, Gomez isn’t one of those players who’s guaranteed a starting place and neither is he in such substantial credit that bad moments occurring back-to-back can just be shrugged off.

That isn’t a prompt to re-categorise him, that would be absurd, but this was a reminder that van Dijk’s shadow is a forgiving place and that, when he’s not quite himself, there are still imperfections in Liverpool’s backline.

7. Defensive issues aside, the movement from Kevin De Bruyne for City’s second was exemplary. Most of the time, it’s De Bruyne’s talent which draws praise and quite rightly so, because that dynamic playmaker category – that floating position he plays – is a territory almost all of his own.

But that second goal was about workrate: his run drew Andrew Robertson away from the ball, creating the time and opportunity for Foden to play Sterling in on Gomez. Simple, but superb. The goal doesn’t happen without him and his industry is just something else of virtue to admire.

8. That goal isn’t scored without Phil Foden, either. There are lots of young players who are pretty on the ball and who can play with one or two touches in tight spaces, but not nearly as many who know when to release possession. Foden seems to have that instinct and – at a guess – that’s probably why Guardiola currently sees him as a credible attacking option.

It’s a fine art. Having the timing to draw players in and then exploit the space created by that displacement is a real skill and Foden has it.

9. …and he can finish. That much we knew – or are starting to know – but the intricate build-up also made him look like a player born to play for Guardiola. The finish was comprehensive, a lovely lift over Alisson and high into the net, but it was the awareness for where the defenders were and where the space to drive into would be that made it such a charming bit of play.

Admittedly, it had become obvious by that point that Liverpool weren’t themselves and that one team was considerably more committed to their task than the other. But what a good goal and it’s rare that Andy Robertson is made to look that silly by anyone, let alone a player still searching for a permanent place in a first-team.

10. Let’s put Rodri in the ‘maybe’ pile. As time goes on and a replacement becomes increasingly hard to find, it’s becoming obvious – if it wasn’t before – just how unique Fernandinho is. Even now, at 34, City just aren’t the same without his tranche of abilities at the base of their midfield. Understandably so, because how many players with his quiver of passes also possess such sturdy defensive attributes too?

Put in another way: Could Luka Modric also play centre-half? Could Toni Kroos or Casemiro?

It’s not just a question of being able to sit and pass – see Jorginho’s issues at Chelsea for proof of that – because Guardiola’s teams not only need to be armed with knifing precision from deep midfield, they also require the player in that role to perform the defensive duties of a small army without possession.

Can Rodri do that? Let’s see. The positions he receives the ball in are smart enough and he seems composed in possession, but there isn’t an overwhelming case for him yet.

11. That’s going to be a long-term argument, isn’t it? You can feel it coming. On the basis that City have other priorities this summer and whatever money they do spend will be used to reinforced the centre of defence and the full-back positions, Rodri will presumably have at least another season to make this role his own – during which, naturally, his supporters and apologists will clash after every game.

He’s going to be one of ‘those’. Nice ball over the top for the fourth goal, mind. Lovely. He’s a good player. Unfortunately, the man he’s tasked with replacing was an extraordinarily rare one.

12. How do Liverpool work Naby Keita into this midfield?

It seems necessary for the sake of the side’s evolution. That seems absurdly harsh given everything the Henderson-Fabinho-Wijnaldum trio has achieved but, on a technical basis, Keita is probably better than all of them. People forget how he was viewed during his time at RB Leipzig. Temperamental and occasionally difficult, but also absolutely brilliant – shades of Iniesta, even, in the way that he’d carry and create.

That’s heady praise, possibly even hyperbole, but there’s no question that if his abilities were woven into this side properly, then its midfield would become a protagonist in games in a way that it currently isn’t and probably unlock different ways of winning games. It might also move away from some of its current dependencies, too, and the difficulties it experiences without Sadio Mane or one of the full-backs.

What’s the answer? Fabinho’s the best defender of the lot, he has to play. Henderson has also been deified on Merseyside in a way that makes his technical shortcomings essentially irrelevant. He’s not going anywhere. Is it Wijnaldum – is he going to have to be the necessary sacrifice if Keita is to have the impact he should?

13. Just to revisit the point about Benjamin Mendy. He actually played well this evening and, because he did, that first point seems really harsh. But isn’t the problem his fragility? His running style seems changed from what it was two years ago, and he seems a more clunky, clumsy player.

It’s like the difference between a young Jack Wilshere and the older incarnation, the version most recently seen limping about against Chelsea on Wednesday night. An injury and another interruption never seems very far away and, on the basis of the points raised in this article about the differences between Liverpool and City, that doesn’t seem like an uncertainty which can be left unaddressed for much longer.

14. The VAR intervention in the Sheffield United-Tottenham game remains the silliest of the night, but the decision to disallow Riyad Mahrez’s goal gave it some competition. Yes, it’s the rule, but when goals are being chalked off for handball when that handball has only occurred because of a foul, then it’s time to have a rethink about some of these mechanics.

If Fabinho doesn’t go through the back of Phil Foden, then Mahrez would probably still have run through to score. At the very least, it’s worth acknowledging that the literal way in which some of these laws are being applied is not really in the interests of the sport.

15. This game isn’t going to have any long-term worth, but it’s testament to how finely tuned football teams are. Liverpool probably didn’t have the most arduous week of training and, most likely, dietary and nutritional standards were allowed to slip over the last few days too. That’s putting it mildly, even though they probably didn’t spend the last 72 hours living like they were on a stag-do at the darts.

But it’s amazing how different they were. The energy levels were down, but not nearly as much or as noticeably as the general focus. Some of the positioning in defence was absolutely wild and, within the space of a week, all the little cohesions and understandings which make this Liverpool side so great had dissolved.

No big deal, they’re champions, but it’s a reminder of how elite teams need to be perpetually maintained to retain their advantages and also how dependent on their chemistry they ultimately are. It’s only been a few days and yet – despite probably living well and basking in the post-title glory a bit too much – that slight decrease in competitive tension reduced one of the most dominant sides of any Premier League season to generic cannon fodder.

16. For City, this wasn’t meaningless. It’s not some grand triumph which redefines their league season or disguises the fact that they remain a team with flaws. But it was good enough to continue the changing discussion around them; they’ve been excellent since the restart, playing like a side who are beginning to recover some lost ground.

They seem very fresh. Even in the Premier League, where they have nothing to play for and only injuries to avoid, there’s a life to their football which they didn’t have before the lockdown. Not domestically, at least. Whereas previously everything had felt as if it was reaching the end of a cycle, now it’s the opposite. Maybe it’s the appointment of Juanma Lillo as an assistant, perhaps it’s Guardiola’s infectious intensity, or maybe it’s a simple as a refocusing in response to having to sit and stew during lockdown, and these players seeing a thousand Liverpool victory laps in their mind.

Who knows, but they’re different. The football is bright and sharp, and inventive in a way which suggests a new degree of fertility. Even with six games left, they look like a side who can’t wait for next season to begin.