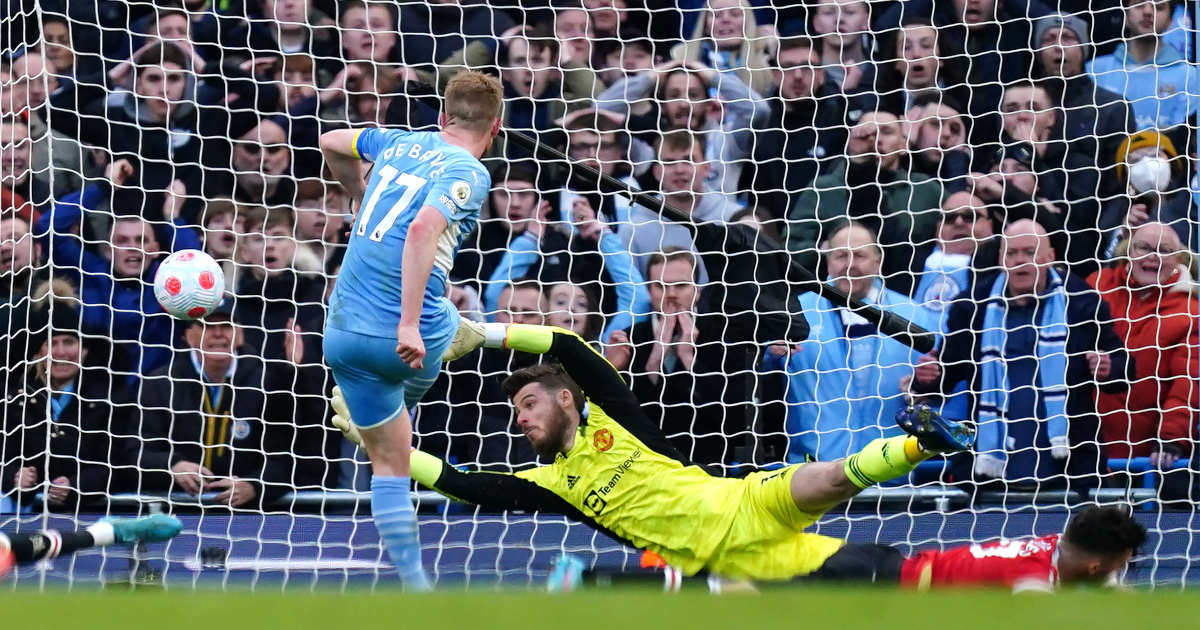 Manchester City and Manchester United showed us all where they are in relation to each other, and that’s not good news for United fans.

1) Derby Day. A day when form can go out of the window, and something is at stake no matter where you happen to be in the league table. A day when there is something at stake. It’s popular to reduce all of this energy and tradition down to ‘bragging rights’, but it’s about much more than that. Manchester City and Manchester United have been playing since 1881, and they’ve been pushing and pulling at each other ever since. It taps into a lengthy history and affects the present at the same time. It matters, and this makes the paucity of Manchester United’s performance at The Etihad Stadium all the more perplexing.

2) Before the game, came a swirling fog of fact and rumour. The fact was that Cristiano Ronaldo wasn’t starting for Manchester United. The official line was that he was out with a hip flexor injury. The rumour – started, very much in the style of 2022, by his sister liking a post on Instagram – was that he wasn’t injured, and that he’d been dropped by Ralf Rangnick. There’s an obvious conversation to be had concerning what difference that might make to them on the pitch, but it’s also worth asking what good this perpetual media circus ever does the actual team. It may be great, it may be slight; it seems doubtful that it can make no difference whatsoever.

3) In some respects, Manchester City and Manchester United represent two different visions of what it means to be powerful. United are the global machine, capable of summoning up a crowd, wherever they go. They have considerable talent and have spent a lot of money on players, but all of these advantages have been squandered by a senior management that values profit over silverware and a constant swirl of speculation, gossip, politicking and, ultimately, unhappiness. City have spent even more money, but have avoided becoming a soap opera. The biggest club prize of all may be beyond them, but they just get on with the job of winning football matches.

4) This difference is also accentuated in the managers themselves. Pep Guardiola has been with Manchester City for six years, and the whole club has been built around what he needs in order to make his team the best in the game. Ralf Rangnick is an interim coach until the end of the season, and no-one still has any idea who will be replacing him. And it showed.

5) If what Manchester City aspire to be is encapsulated by one player, it’s probably Kevin De Bruyne on a day like this. There’s something almost attainable about Kevin De Bruyne. He looks like one of us, rather than a shop mannequin, and there is something understated about much of his football, which could almost lead you to think ‘I could do that’. But, of course we can’t. De Bruyne is a superb athlete, geometrically extraordinary, and often plays as though he has an extra sense that goes beyond mere spatial awareness. His first goal was about playing as though in camouflage, with two forwards dragging United’s central defence out of position for Bernardo to pull the ball back for him to slide in.

6) For his second goal, De Bruyne awaited his moment in the penalty area while Manchester United floundered around him. Phil Foden found himself able to cut a diagonal whole in the United defence from the left, and when his shot was parried by De Gea, the ball pinballed around, through Harry Maguire’s legs and back for De Bruyne, who had again been patiently waiting his turn. In this moment, we saw much of the difference between these two clubs for most of the last decade.

7) But to talk of these two goals alone would be misrepresentative of a first half in which Manchester United played a full part. When they did get forward, they frequently looked dangerous. Indeed, De Bruyne’s first goal might have come after just five minutes, but City’s lead might not even have lasted for very long. Within five minutes, Fred came achingly close to bringing United level when he got on the end of Bruno Fernandes’ ball and was only stopped by a diving Ederson. But their defensive frailty really rendered much of this irrelevant.

8) United’s equalising goal, scored after 28 minutes by Jadon Sancho, showed the possibilities that come with spending the amount of money they have. A beautifully weighted through-ball from Paul Pogba switched the play from right to left. Sancho picked the ball up, cut inside on the edge of the penalty area, and curled a low shot around Ederson and in. This was what United paid all that money for these two players for. But doing something like this isn’t enough when you’re defending the way that Manchester United did against a team with the attacking strength of Manchester City.

9) It says something for Jack Grealish’s season so far with Manchester City that his inclusion in the team for this game was considered worthy of comment. You’d expect that a £100m signing would, by the March following his transfer, be one of the first names on the team-sheet but, while Grealish is slowly growing into his position at Manchester City, he still doesn’t quite seem to be a natural fit. But it should also be added that he did play a significant role in overloading the left side of Manchester United’s midfield and defence.

10) The goal that effectively ended the game as a contest was brilliant in its simplicity, its intelligence and its execution. A Manchester City corner on the left-hand side had everybody jostling for position on the six-yard line as ever, only for De Bruyne to sling to ball over to the far edge of the penalty area for Riyad Mahrez to half-volley the ball into the corner of the goal. Mahrez had started his run from so deep that no-one had given any consideration to marking him; it was the sort of move that would only even be attempted by a team brimming with confidence.

11) The third Manchester City goal was deflected off Harry Maguire’s knee, a deflection which seemed to just about sum up another poor afternoon for the United defender. Maguire is rapidly becoming something of a punching bag for criticism among the United support, and while the level of vituperation is obvious off-the-scale bonkers, you can see where it comes from.

The ball passing through his legs as it pinballed its way around the six-yard box for the first goal was one thing, the deflection for the second another. And he might have found himself on the wrong end of a red card just after the hour, when he clattered into De Bruyne with a tackle from which there was no realistic likelihood of him ever reaching the ball. Few would have been surprised had it been a red card.

12) At 3-1 down, Manchester United just seemed to… give up. City toyed with them for much of the last 25 minutes, occasionally scampering up the pitch and summoning up a shot, but largely happy to sit on their lead. If anything, by the time of the full-time whistle, United had offered practically nothing throughout the entirety of the second half, which speaks volumes for the chasm between the two teams. But what should probably be troubling Manchester United supporters is that United almost seemed to settle for ‘only’ losing by a two-goal margin to Manchester City. It didn’t say much for the aspirations of the current generation of Manchester United players.

13) And in the end, they couldn’t even manage that. As the clock ticked over 90 minutes, David De Gea, who had spent the match offering at least some degree of resistance to City’s attackers, mis-cued a clearance which was threaded back through to Riyad Mahrez, who thumped the ball into the top corner via the side of De Gea’s head. It was one of those goals which looks offside at first, but then after a fairly lengthy delay the goal was given. This match had already been over for a good 25 minutes, but it did offer a truer representation of the balance of play.

14) In material terms, the weekend will end with the Premier League title race very much as it was, although the margin of victory has done City something of a favour, too. They have now reduced the goal difference to one goal from Liverpool’s. With their 1-0 win against West Ham, Liverpool remain six points behind them with a game in hand and the two teams still to meet once this season. However impressive City were in this match, there’s still all to play for at the top of the table.

15) Nothing unexpected happened to Manchester United in this match. It was, really, a culmination of all the painfully evident truths that have been staring everyone in the face for years. They have an unbalanced team with little apparent will for a fight, there is a now apparently perpetual feeling of unhappiness hanging over the club, and there is no apparent plan beyond ‘please keep us in the Champions League because that’s were the serious money is’, while sucking every last dollar possible out of the brand name while it’s still worth anything. With Manchester City and Liverpool, their two biggest rivals, so far ahead of them in the Premier League, looking in on the club increasingly feels like visiting somebody else’s idea of hell.

16) But for all the criticism to be aimed at Manchester United (and their performance deserves it), Manchester City should be credited for a superb, controlled and frequently imaginative performance. They are made of Premier League title-winning material, a team for the ages; as are Liverpool. Manchester United are not, and it’s difficult to see how they can possibly close this gap.