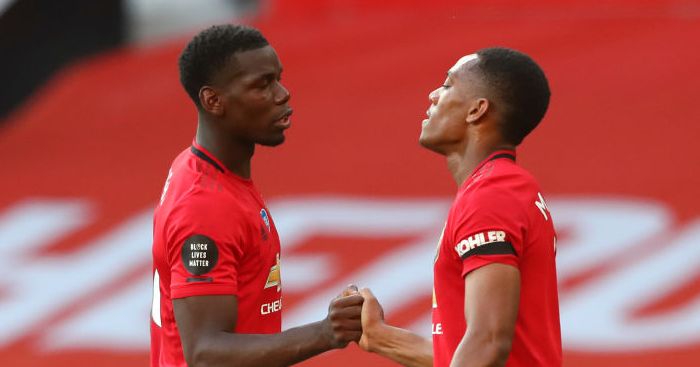 1) To witness two teams at diametric opposite ends of the confidence scale is quite something. A couple of points ostensibly separated Manchester United and Sheffield United on Wednesday morning but by the evening that slight gap felt chasmic and growing still.

The hosts were adventurous and courageous where the visitors were cautious and timid. Bruno Fernandes would misplace a pass but hunt the ball down tirelessly and continue to take risks every time he was in possession. John Lundstram would let one mistake engulf and define him for five or ten minutes thereafter. Aaron Wan-Bissaka approached every opportunity to venture forward as a treat. Jack Robinson and Enda Stevens saw their attacking duties as little more than a chore. Sheffield United, put simply, tried their utmost to tick every tactical box while Manchester United spent most of the game thinking outside it.

2) It seems churlish to wonder how much of Manchester United’s form since late January has been dictated by momentum. As genuinely thrilling as they have been at times throughout their 13-game unbeaten run, it would be interesting to see how they react to a setback or being knocked off this unwavering course.

There have been snapshots. They were behind for almost an hour at Tottenham and retained enough belief in what they were doing to equalise. But we are at the stage of this side’s development and evolution where it has to be asked whether this is their true level or they are collectively playing above themselves in the moment. And that is no insult whatsoever: part of the intrigue of watching Liverpool and Manchester City is in pondering whether they are simply in cruise control or have more gears to manually work through when needed.

3) Chris Wilder might be caught in two minds. Sheffield United were not as sloppy and tired as they looked at Aston Villa, nor as feckless and feeble as they were against Newcastle. They capitulated in the latter fixture but were utterly outclassed by the better side here.

Much of their general play was better. Those familiar patterns were there in fits and bursts. But individual mistakes cost them for the first two goals and they were rendered mere training cones for the third. As it is, Sheffield United seemed to recover portions of themselves but are suffering a collective identity crisis.

4) How much of that is down to their absentees? This was the most changes Wilder had made to his side since promotion, with one of the five enforced due to Dean Henderson’s ineligibility. It was the first time since October 2016 that the Blades started without the goalkeeper, Henderson, John Egan and Jack O’Connell. They conceded three times in that game, too.

Phil Jagielka is a consummate professional but it always felt cruel to put the oldest Premier League player this season against that attack. The other changes – Lundstram, David McGoldrick and Lys Mousset for Sander Berge, Billy Sharp and Oli McBurnie – had no material effect on the game. Sheffield United would have lost with or without them; Egan and O’Connell are the two they can ill afford to lose.

The manager has made a point about “scrappy goals” numerous times before and his coaching of runs and timing has clearly paid off. Martial showed the sort of spatial awareness for his first and second goals that he lacked so sorely under previous managers, while that third goal was a wonderful example of the ability he has long possessed. Only a fool wouldn’t see the Frenchman as a long-term central option at the heart of an exciting attack.

6) Honestly, though, some of that interplay was gorgeous: Martial with Marcus Rashford; Fernandes with Paul Pogba; the quartet even strung a couple of moves together between them, while Aaron Wan-Bissaka and Nemanja bloody Matic were fine featured artists.

Credit to Solskjaer, because all four of those players have had doubts cast over them, both at Manchester United and beyond. Rashford and Martial are in positions that supposedly do not suit their attributes, Fernandes could not possibly transform an entire team alone and it was almost accepted that Pogba would be sold this summer. It is an enviable foundation from which to build.

7) Most will point to the third goal as an example of that, Pogba zipping a ball into Fernandes, the Portuguese playing in Martial and the striker playing a neat one-two with Rashford before chipping over Simon Moore. The move in the 19th minute lacked the finish but was arguably better otherwise.

Matic replaced Martial this time, finding Fernandes with a bright forward pass. His first-time flick into Rashford was as exquisite as the lobbed pass Pogba returned to the Englishman, who miscued the volley. Sheffield United, for neither the first nor the last time, were powerless. Manchester United, meanwhile, have been working on those fluid combinations that involve a single touch from Fernandes to unravel a defence. They look brilliant.

8) Not that the hosts had to rely on such ingenuity for every chance to present itself. Their opening goal came within a few seconds of a routine throw-in. Sheffield United treated it like a grenade and their resistance duly went up in smoke.

Wan-Bissaka’s throw completely disorientated Oliver Norwood, perhaps with the help of Martial’s movement, and Rashford capitalised ruthlessly. He skipped past Jagielka and Robinson and drilled a low cross that Martial reacted to incredibly well to steer past Moore.

The goal can be traced back to its source: Norwood. He was actually marking Rashford yet stepped away to intercept the throw. Martial caught him sleeping, his pass attempt rebounded to Rashford and the damage was done. Sheffield United were coping well enough before then; they never looked like managing an uphill battle.

9) Norwood should be questioned for the second goal, too. He was remarkably slow to react to a loose ball in Sheffield United’s half, impeded somewhat by referee Anthony Taylor, and a fire was lit that he barely tried to put out. Matic sauntered down the left and the play was switched through the conduits of Fernandes and Pogba before Wan-Bissaka crossed for Martial. Stevens and Chris Basham deserve blame but the situation stemmed from Norwood’s inaction.

His half-time removal was 45 minutes too late. Some may point to a pass-completion rate of 96% and two chances created, but he provided barely any defensive resistance of note and wasted Sheffield United’s three first-half corners with woeful deliveries. Berge has struggled since the restart but at least has the excuse of only signing in January and having five disjointed months to acclimatise. Norwood just looks spent and lost.

10) The Blades as a whole seem bereft of ideas in attack. It was surprising to hear both players and coaches shout “overload” towards the end of the first half whenever George Baldock was in possession on the right; it seems like such a basic tenet – particularly for this club – that they shouldn’t need a reminder.

They had four shots to lower the bar further from seven against Newcastle and five at Aston Villa. In each game they have found the target just once. Wilder’s reaction to a lack of threat in the previous two games was to change his entire strikeforce from McBurnie and Sharp to McGoldrick and Mousset, yet experimentation garnered the same underwhelming result.

11) Shortly after the “overload” shouts, Harry Maguire could be seen and heard reprimanding Luke Shaw with a quick “f**king switch on”. Mousset, after his own injury stoppage, almost stole the ball off the left-back’s toe from Maguire’s free-kick, barely managing to divert it to safety.

This was much better from Maguire, albeit in the face of much more limited opposition. The majority of his movement was dedicated not to monitoring livewire forwards but to placing himself perfectly to clear Sheffield United’s aimless long balls. He won at least twice as many headers as any other player and was generally imperious.

12) Matic had a noticeable calming effect. He has been lost in the midfield shuffle amid interminable conversations about whether Fernandes and Pogba can play together, Fred’s rejuvenation and if Scott McTominay is the greatest player of all time. It will suit the 31-year-old to operate in such considerable shadows. He was brilliant and that is surely the best midfield combination at Manchester United for the time being.

13) And what an influence he had on Pogba. The Frenchman thrilled from a nominally deeper position from normal, creating four chances, completing five dribbles and playing eight accurate long balls out of an attempted nine. That might sound like an unnecessary statistic overload but it epitomises just how varied his skill set is. With Fernandes taking the risks ahead of him, it feels like Pogba is able to keep things a little more simple instead of trying to be all things to all men.

The footwork involved was mesmerising. In the space of about five touches he nutmegged Berge, left Jagielka on his knees and glided past Baldock, with only Martial able to get close enough to tackle him in search of his hat-trick goal.

“Pogba will be fuming at that,” said the commentator, just as the Sky Sports cameras cut to him smiling and stretching out an arm in semi-incredulity. “Well, he’s taken it quite well really,” he added a few seconds later. Perhaps because he isn’t the petulant egotist he is constantly painted as, but is instead a team player who just enjoys the game?

15) For Sheffield United, perhaps the most humbling moment came in the 79th minute. Manchester United made a quintuple substitution and all five players would likely have strengthened the visitors’ starting line-up. Juan Mata, Scott McTominay, Daniel James, Andreas Pereira (that one might be a push) and Odion Ighalo all offer something the Blades currently lack. That ought to mitigate any panic at being dismantled by a team that was held to a 3-3 draw at Bramall Lane in November.

16) Wilder should obviously still be concerned. A gulf in quality only goes some way to explaining such a damaging defeat.

Sheffield United might have felt the impact of the Premier League’s pause more than any other team. They thrive off momentum and that has been shattered by a three-month break, while the injuries they managed to avoid early in the season have torn through a squad hardly designed to absorb absentees.

The intensity has been lost, along with the tempo. And most pertinently of all, the fans. Sheffield United were beaten by three goals or more only four times in 167 league games under Wilder between August 2016 and March 2020. They have lost 3-0 twice since Sunday. It’s time to forget about Europe for a couple of games and just try to steady the ship.