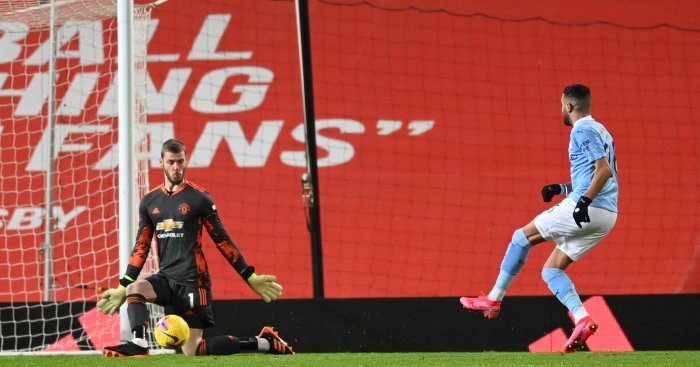 1. That…was not good. Both teams will strive to identify positives, but really this was a poor game that looked every inch like a contest between a pair of mid-table strivers. If that exact same match was played out between Southampton and Aston Villa, the teams who sandwich the Manchester clubs in the table, nobody would be talking about top-four pushes, never mind title challenges. If a big derby game is a chance to make a statement, then there was nothing here from either team to worry title contenders such as Tottenham, Liverpool or West Ham.

2. If you’ll forgive the brief diversion – finding 16 Conclusions can be tricky on even the best games – let’s rewind six days to Sky’s post-mortem on Boring, Boring Tottenham. We spoke about how weird it all was enough at the time, so we’ll not labour the point, but the hour Redknapp, Souness and co spent worrying how the players can possibly be happy playing in way that produces a 2-0 derby win (including a goal of the season contender) to go back to the top of the table looks even more jarringly odd after sitting through this 90 minutes of dirge in Manchester. This game was more Mourinho than anything Mourinho has ever Mourinhoed on the most Mourinho day of his life.

3. If you can’t say anything nice, don’t say anything at all. I’ve tried pulling that one on the editor, and she says no dice; we still need 16 things. Sigh. Fine. Let’s find a positive. United may have been the home team, but they are definitely the team that can be slightly happier with this. Only slightly, mind, but definitely happier. It keeps them above City in the table, at least, but it was also a response to the bad starts that have bedevilled them recently. It was understandable for United to be feeling a bit weary and a bit down on the back of a disastrous midweek. But they were solid. City had only a couple of chances in the first half and even fewer in the second.

4. But how much was this down to United and how much down to City’s tactics? Given United’s much-discussed problems early on in games, it was bizarre to see a historically front-foot team so passive in such a big game. They really are a shadow of the great side of just 18 months ago. The press no longer snaps as it once did. Here, they only really showed anything if Bruno Fernandes got the ball or appeared in imminent danger of doing so. There were a couple of moments, but that’s all they were. And it was all, off the ball and on, just so arse-numbingly sssssllllloooooowwww.

5. Amid the doom and gloom, it’s worth noting that both these teams are within five points of the top of the table. Either of them could still win the league. But with City every bit as much as United on this evidence, we’ve reached the point where that would be a surprise. That’s significant: a run from City (or United) that takes them to the title could still happen, but you’d be very surprised to see it. Unlike last season, that has absolutely nothing to do with an unstoppable runaway opponent and everything to do with their own failings. Liverpool provided cover for City’s falling-off last year that doesn’t exist now. There’s a danger we’re already doing City an unfairness by comparing them to the back-to-back title winners. This City team just isn’t as good as that one. The players aren’t as good, and nor are the tactics. They don’t press as well, they’re less clinical, less destructive. Less scary. Once lost, that aura is almost impossible to get back. At least half the Premier League has viewed games against City as damage-limitation exercises for the last few years. That should no longer be the case.

6. Body language is a tricky thing to read, but Kevin de Bruyne’s was interesting here. De Bruyne being De Bruyne he still played a couple of delightful through-balls – almost Kanesque at points – but there were also moments of arm-waving head-shaking disappointment at team-mates not being quite on his wavelength or possessing his speed of thought and action. He was playing the game – in his head and with his feet – on a higher plane and at a faster speed than his colleagues.

At 29, if he’s not looking around and wondering about what happens next then he’s not human.

7. Perhaps the most worrying thing of all for City, though, is that despite the clean sheet and Ederson only having two saves to make across the whole 90 minutes, they still did not look particularly solid at the back. Against a better or even more ambitious side they could have been in trouble. United had chances from three first-half corners, Scott McTominay just failing to apply the final touch at the far post after a glancing header, while Harry Maguire and Victor Lindelof both headed over after finding far too much space amid City’s defensive zones.

8. All things are relative on an afternoon as soporific as this, but Fred had a quietly excellent game in United’s midfield. He probably didn’t expect things to be quite so comfortable, yet it would be wrong not to give him at least part of the credit for that. Tidy and efficient in possession – which has not always been the case – he completed 50 of 53 attempted passes and made three tackles. United actually had more joy passing through City’s midfield than vice versa. Unexpected, and largely down to the Brazilian.

9. The old City still occasionally appears, like a mirage. A flicker of the team they were. Blink, though, and the new more ponderous team has returned. One such flicker produced the game’s one real standout moment of quality on 34 minutes. It was everything City were at their best and were not for the rest of this game. Gabriel Jesus surged forward. He held off a couple of challenges in taking the play swiftly up the pitch before squaring for De Bruyne to play just the right ball for just the right run from Riyad Mahrez. He delayed his shot, hoping perhaps for David De Gea to commit himself. De Gea did not, and blocked the ultimately tame shot. City were never able to build any momentum from that, and it was a big moment for the United keeper. Everyone has an opinion about whether or not he should still be in this side, but today there was only this one big moment for either keeper. De Gea did his job.

10. Let’s talk about United’s penalty that never was, because we still need seven more things here, bloody hell. Notable for a couple of reasons, specifically its obvious correctness. A relief for VAR to get one so unquestionably correct, although we could all have done with some drama to be honest. Yes, this game was so bad, so devoid of incident, that we’d have welcomed VAR piss-boiler just to remind us we’re alive. Funny, though, how the time we’ve all spent studying VAR replays has sharpened our offside spidey senses. Marcus Rashford was unquestionably offside when played through. By about a foot. Time was, we’d all have looked at that and agreed it was tight enough to go either way. Now we don’t even need a freeze-frame, never mind Stockley Park’s lines, to declare him well offside and immediately concern ourselves with other things.

The ‘penalty’ was also notable for being another reckless concession from Kyle Walker. He remains a player with huge upsides and has done much to win back the trust of managers at club and international level, but he always has that rash challenge in him. Even at its best, this year’s City side is playing to tighter margins with less possession than in the recent past. Those Walker moments become both more likely and more costly in this team. He was only a blatant/marginal offside decision from costing his team here.

11. Ederson’s kicking. I’ve written “Sh*t” in my notes here and, as should already have become abundantly clear, there are not 16 things to talk about from this game so let’s mention that. He definitely scuffed a couple quite badly. Even if the rest of this City performance can no longer be considered as atypical as it once would have been, that definitely is. It’s such a huge part of his game that he can’t really afford for it to go missing.

12. Maybe we shouldn’t have been, but we were surprised at how very little the game changed after the break. If it was understandable (albeit vaguely dispiriting) for United to feel like they were getting enough out of the game, it was startling to think Guardiola and City could possibly feel the same. Ferran Torres made some difference after replacing Mahrez. He made a couple of more direct runs and injected some pace into a soporific afternoon, but it was far from seismic.

Sergio Aguero’s absence from the matchday squad was, we were assured, nothing more than careful “step by step” management of his return from injury – although lord knows this game was crying out for him – but Guardiola’s apparent belief that neither Phil Foden nor Bernardo Silva – or more specifically both – could not have had a much-needed positive impact on this game is a puzzle.

13. Harry Maguire is a very good centre-back in football matches like this. Two tackles, three interceptions, two clearances, three blocked shots. He was, essentially, always there. Exactly where he needed to be, comfortably and repeatedly in the way of everything City could very slowly throw at him.

14. There is absolutely no doubt that 14 Conclusions would make for a much better feature, in my opinion. Fourteen is quite simply a far superior number.

15. Solskjaer’s verdict on this dreary game against a team United beat three times last season is easy to mock: “In my time against City, that is the best performance we have had, not the best result.”

But you can, just about, see why he would say that. United snuffed the game out, and a four-match winning run had also arguably given them some leeway to take a point from this one, keeping City at bay in both the match and league table. The game, essentially, went to plan for Manchester United. Solskjaer pointed to their wins over City being counter-attacking wins, and he’s right. This was the most ‘even’ game of football in terms of chances and possession and territory. But when Solskjaer devised this plan, he surely can’t have been planning to come up against such a poor City display. Whether Solskjaer’s assessment and gameplan reflect negativity or pessimism or realism – given his main qualification for the job is being so thoroughly imbued with the ineffable greatness of Manchester United – is up for debate.

16. We’ve been quite dramatically, alarmingly wrong with just about every prediction we’ve made before and during this season so let’s have a stab at another one. We’ve dragged out 15 iffy conclusions from this game, so let’s at least make a decisively bold one at the finish. We definitely did not see the 2020/21 Premier League champions today, no matter what the bookies may think or the current closeness of the league table may indicate.