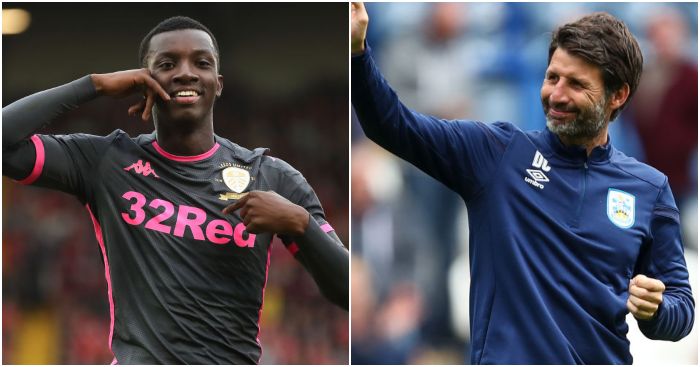 1) Two new managers going head-to-head in a Yorkshire derby with the home boss having attracted the affections of the day’s visitors is a Sky Sports wet dream. The reality of the affair was more akin to a disappointing mess we all come to expect from a 12pm kick-off, but still.

This match was never going to show much more than which side would take three points on the way to their final objectives this season, but it was disappointing from a Huddersfield Town perspective just how little things had changed since Jan Siewert’s disappointing spell in charge.

Danny and Nicky Cowley were adamant about being manager and assistant manager, not head coaches at Huddersfield. It is no surprise given they changed the entire ethos at Lincoln City over the past three years, but there is a lot that needs changing at the John Smith’s Stadium, and certainly more than can be expected during a season that has started with one point from seven games.

2) Leaving Lincoln City was not the shocking part of the west Yorkshire managerial move, but the destination for the Cowley brothers certainly was. Indeed, and as hard as it is to believe now, Lincoln were a club struggling for success and identity upon their arrival. Huddersfield represents a similar mission on a much bigger scale.

But unlike the Imps at National League level, Huddersfield’s failure is not due to their status as Championship strugglers: that is the Terriers’ natural  position over the last couple of decades, after all. What this mission needs is dedication, time, purpose and direction because it may well take successive relegations for Town to make any progress whatsoever. Sometimes you have to feel the lows to benefit from the highs.

3) For Sheffield Wednesday, the 2-0 victory represented where they are in comparison to their Yorkshire rivals. The Owls also had Garry Monk taking charge of his first game, but their need for a new manager was not as desperate as that of their Sunday lunchtime hosts.

Lee Bullen had once again done a noble job with the caretaker reins, as evidenced by this victory leaving the S6 outfit one point shy of the play-off places. Steve Bruce departed for pastures new in the summer, and while immediacy was needed at Hillsborough to make this a season worth waking up for, the arrival of Monk, who has now managed nearly a quarter of the Championship’s current incumbents, represents progress for Wednesday.

4) Wednesday were not great on Sunday, but they didn’t have to be. Huddersfield are carrying so much deadwood they will be able to make a limp, disappointing bonfire to warm themselves up at the wrong end of the Championship table.

It certainly takes more than one hand to count up the players who made no impact in blue and white in one of the biggest games of the season. For large parts of the match, the two sides were interchangeable and this was hardly the most exhilarating fare the Championship has offered over the past month.

5) Don’t they just always find a way? Leeds United and Barnsley may not have been the main event on Sunday afternoon, but the undercard provided the entertainment and views worth paying for. Against the Tykes, Leeds were matched for fight, spirit and quality, at least in spurts.

But champions always overcome and on a weekend when the early heavyweights fell to the ground, Leeds delivered, if not a knockout blow, then certainly enough punch to put themselves on top seven matches into the season. For the pre-season favourites, getting there as soon as possible was important. Staying there is now crucial.

6) Leeds were made to sweat and toil for the three points to take back up the M1 but they did what they so often do: biting away at teams until finally they relent. If any team scores more goals in the final ten minutes of matches this season than Leeds, I shall get a Marching On Together tattoo on a part of my anatomy of Marcelo Bielsa’s choosing.

You would be similarly hard pressed to find a player capable of scoring more crucial goals than young forward and Arsenal loanee Eddie Nketiah this campaign. Whether or not he will ever dislodge Patrick Bamford of his starting role up front on a regular basis is another matter, but the England Under-21 striker’s penchant for scoring goals from between six and 12 yards out is a delight to behold.

The lad has talent, and there is no better place for him right now than the Leeds bench for an hour and the green, green grass when it matters.

7) Isn’t it amazing what a weekend without competitive club football can do to the early pace-setters? To suggest that surprise Championship leaders Swansea City and Charlton Athletic were building their starts to the season on well-earned momentum alone would be ill-judged, but one does have to wonder whether the Swans and the Addicks could have done without the time off.

Both had gone into the break with clean sheet victories over sides widely expected to exceed them this campaign before both succumbing to 1-0 home defeats against sides with less lofty expectations in 2019/20.

First defeats of the season for either side, and the reactions of both will now be crucial in showing whether, when it comes to promotion, these two are the real deal or just pretenders.

8) Before the first international break of the season, it was extremely difficult to draw conclusions about the EFL without accusations of bias or jumping to assumptions all too hastily. But now the first break of the season has passed, we can start to determine what a large percentage of clubs will be calling a success come May.

That Stoke City would class 21st place and survival as some semblance of achievement already is testament to just how terrible events are in the Potteries. Plans A, B, C and 5-4-1 diamond are already smashed and it’s difficult to see a way forward under manager Nathan Jones.

Sometimes, certain managers just don’t suit certain clubs. In a week where the former Luton Town boss was given a vote of confidence, even the dread that brings shouldn’t be enough to turn the hot seat to boiling point. After two weeks off, a sacking triggered by one expected defeat would make sticking with Jones through the break worthless.

9) That being said, not every ounce of blame has to fall to the managers. Sometimes players win and invariably lose games almost singlehandedly. Joe Allen’s red card on Saturday was harsh, but it is the latest in a long line of mistakes all too common by the Wales international midfielder. He shouldn’t be counting his chickens about an immediate return to the starting XI when his suspension is complete.

10) And when it comes to individuals making or breaking their team’s weekend, it is the youth who have been carrying much weight on young shoulders over the weekend.

Jude Bellingham, 16, scored his second Birmingham City goal to take the spoils at Charlton while Eberechi Eze opened the scoring for QPR’s continuing surprise assault up the table in their 3-2 win over Luton Town. Wigan Athletic’s youth product Joe Gelhardt grabbed his first Latics goal to snatch a 2-2 draw at Hull City.

It’s not only Frank Lampard’s Chelsea who favour the youngsters, you know.

11) Ah, the Manager of the Month curse. All three bosses to win their divisional accolade on Friday saw their sides unable to capitalise with victories their sides have become so accustomed to this season.

Steve Cooper of Swansea oversaw his first defeat with the south Wales outfit; Ipswich Town’s Paul Lambert and Matt Taylor of Exeter City both took charge of home draws. In these ever-changing times in football, it is nice to see some things never change. Long live the curse. Jurgen Klopp must be some sort of genius

12) A paragraph or two must go towards the highest-scoring teams of the weekend: Rotherham United and Peterborough United. Darren Ferguson’s side were given a huge helping hand by some comical defending from opponents Rochdale – especially given the Dale’s strong start to the season – but five victories without conceding and finding the back of the net 17 times is ridiculous form. It might well be Fergie’s time again for the Posh.

In Rotherham, the story was about Bolton Wanderers. An early lead, through their first league goal of the season, made it seem like this was the start of a Keith Hill fairytale, but tales of jealousy and shouts of unfairness towards the Lancashire club were wiped away with the Millers’ half-dozen reply. Nine new signings and six new debutants does not a quick fix make. This will take time for Bolton.

13) Which brings us neatly to those who have complained about Bolton’s collective additions and vaguely good recent fortune. Had a plethora of new faces not arrived at Wanderers over the past couple of weeks since the club was saved, then the problems that had arisen would simply repeat themselves.

More matches would be postponed due to the welfare of the youth and the club would likely not even make it to 0 points on the League One table. There is no perfect solution, but baying for extended misery is one of the worst options.

14) Directly above Bolton perhaps, but on the pitch, pointless until Saturday evening. The visit of Fleetwood Town looked unlikely to provide any respite for the Southend United but Steven Humphrys had other, far more ambitious ideas, with his double helping the Shrimpers get off the mark for the season.

Caretaker manager Gary Waddock comes with good experience, albeit largely in League Two and the National League. If Southend have serious ambitions of making this simply a bad start and not the beginning of a relegation season, they need to consider their next managerial move carefully.

The appointment of Kevin Bond late last season did the job in just keeping the Essex club in the third tier of English football but even then his short spell had plenty of pitfalls which suggested hiring beyond the summer was a mistake. Southend’s hierarchy must not let themselves become enamoured with the maiden point of the campaign. The next manager must be right in the long-term. That may or may not be Waddock.

15) A couple of editions of 16 Conclusions ago, we reasoned that if, as a neutral, you wanted entertainment and goals, Coventry City were the team to follow. Conversely this season, Burton Albion’s Pirelli Stadium is the place to avoid – unless clean sheets are more your style.

Saturday’s stalemate with perennial exciters Coventry earmarked the Brewer’s third blank in four home games this campaign. Get those fans a drink!

16) Scunthorpe United’s first win of the season meant that a new team took the mantle for propping up the rest of the EFL. Poor Stevenage. In their first game with Mark Sampson at the helm, however permanently that may end up being, they were courageous and great in possession compared to under Dino Maamria this campaign.

But mistakes at the back – an all too regular occurrence in recent times – cost them against a strong Carlisle United side. Still, Sampson deserves a chance in the midweek fixture at home to Northampton Town before the Graham Westley alarm is rung.

A controversial figure, certainly, but it would be another great step for the women’s game should the former England head coach show managing in both sides of the game is possible.