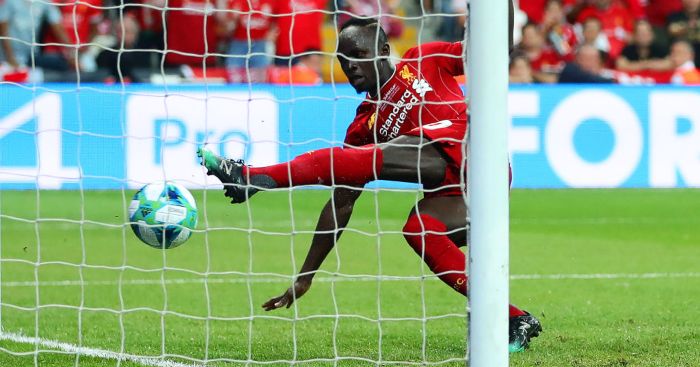 1) Congratulations to Liverpool, who are developing quite the taste for trophies. But without any significant transfer activity, Jurgen Klopp may need a variation from within his existing squad this season. Given his suitability to the native style, Alex Oxlade-Chamberlain’s thrusting straight lines are certainly an interesting prospect and this, given his injury history, was an important night for him.

It didn’t go well. In fact, his peripheral performance served only to stress how long the road back from serious injury really is. Can he still be an asset to Liverpool? Absolutely, but that remains theoretical for now.

2) Maurizio Sarri’s great weakness was the tone of his Chelsea midfield. Other issues certainly presented themselves throughout his reign, but it was the combination of abilities within that area which most consistently caused difficulty. And Frank Lampard’s team selection reprised that failing.

Perhaps those goals conceded at Old Trafford were weighing on his mind, or maybe Mason Mount and Ross Barkley were both being kept back for the weekend, but any midfield containing Jorginho and N’Golo Kante cannot accommodate Mateo Kovacic as its third man. The sum total isn’t aggressive enough, it’s not creative enough, and it doesn’t offer nearly enough support to the attacking players.

3) One of the problems that typically creates manifested early. Liverpool weren’t quite as precise with the ball as usual during the opening twenty minutes and Chelsea were able to steal possession high up the field. Invariably those counter-attacks broke down, though.

The chemistry isn’t quite there, with Christian Pulisic new to the side, and without an additional breaking player with attacking instincts – Mount, Barkley – they weren’t able to exploit that space efficiently.

It’s in the detail. It’s about the right passes being played and released at the right time, and putting dynamic players in threatening positions when a defence is unprotected. Kovacic doesn’t have those abilities, Jorginho doesn’t either, and while Kante is a fine counter-attacking player, his profile still isn’t quite right for the task.

4) Whether it was opening night jitters or just a lack of familiarity with the opponent, Liverpool were not defensively impressive on opening night against Norwich City. They won the game comfortably, but the ease with which their opponents picked through Klopp’s press and his midfield was alarming; Norwich deserved to concede four times in that first half, but Liverpool weren’t that much better.

This was another game with caveats: after all, it was a glorified friendly played on a damaged pitch. Nevertheless, Chelsea’s capacity to find space between the defence and midfield was a concern, with the suggestion that the balance isn’t quite right in that area. Twenty minutes in, Pulisic carved Pedro through on goal with a well-weighted pass and only a super recovering tackle from Andy Robertson prevented Liverpool from going behind.

Less than two minutes later, the same player pivoted off Olivier Giroud and danced between Joel Matip and Joe Gomez. The crossbar saved Liverpool that time, but it was another instructive passage and one which won’t have thrilled Klopp.

5) Up at the other end, it was a first half which showed just how important Roberto Firmino is to Liverpool and what they lack without him. The critical function of his false nine role is the effect it has on a defence’s shape and what that then allows the players either side of him to do.

With Wednesday night’s rotating cast, the effect obviously wasn’t the same. Sadio Mane, Mo Salah and Oxlade-Chamberlain all present a very literal one-on-one challenge, but without Firmino’s tendency to drop slightly behind the play and create positional displacement, Chelsea’s defence was – for the most part – able to remain in a straight, disciplined line which was difficult to permeate. His introduction changed the game.

6) Chelsea deserved their lead. And Pulisic’s slicing run and cutting pass was a moment he’d been hinting at: a beautiful assist and a hell of a statement. Squint and that could have been Eden Hazard and, of course, there is no higher praise than that.

But, friendly or not, Klopp will be furious. In the first instance because neither Jordan Henderson nor Fabinho did nearly enough to prevent the move from developing. In the second, because the entirety of his defence was drawn towards Pulisic, allowing Giroud a ludicrous amount of space (to admittedly finish very well).

7) And if Pulisic was Hazard-like for that goal, he was more so for the one which was ruled out by the offside flag. The Belgian’s reputation depended on his skill and ability to go past players, but he was as feared as he was because he was so destructive. There was end product with him and, throughout the duration of his stay in the Premier League, nobody really came up with a way of limiting his effect.

It’s early, of course, but Pulisic very clearly also has a few punches to go with his dancing feet.

8) Maybe that first half was also a reminder that Kante’s optimal role is not necessarily at the base of a midfield. His limitations show when he’s asked to shoulder too much attacking responsibility – hence the need for a more forward-thinking, No.10-type ahead of him – but he is the finest one-on-one tackling midfielder in European football and that’s an obvious virtue within any press.

Ultimately, his tenacity is unsettling. Even defenders like Virgil van Dijk hesitate before trying to glide past him and for a side like Liverpool, who want to work from a base of authority, having to contend with those ball-retrieval skills in their own half is a big challenge.

9) Firmino created Liverpool’s equaliser within two minutes of coming on at half-time. Andreas Christensen played an ugly, ugly part in Mane’s goal – did he lose the flight of the ball in the floodlights? – but his inability to predict Firmino’s movement seemed tenuously relevant.

Maybe it’s one of the hidden strengths of a player with an ethereal style? When there’s no set trait to be guided by, it becomes very easy for a defender to make a fool of himself by trying to hedge his bets. Christensen was aware of Firmino before that goal was scored, but he wasn’t quite sure where he was. He was passive and neutral and, in those few seconds, he looked as hapless as those England defenders who chased Nandor Hidegkuti around Wembley all those years ago.

10) The flaw in Lampard’s midfield selection showed itself quickly and vividly after the break. Chelsea may have lost their lead and their momentum due to Liverpool’s improvement, but they found themselves unable to alter that pattern once it had been established.

Whereas in the first half their passive midfield had sufficed against a side guilty of giving the ball away cheaply, when those same three players lined up against a more recognisable Liverpool – the slicker, more accurate side that we recognise – Chelsea were unable to do much more than restrict in that area. They had isolated moments of promise, certainly, but not in nearly the same way.

Lampard is still learning, but good management is about being bold and that’s what the situation demanded. When the substitution did come (Mount for Pulisic, Abraham for Giroud), it might have been with the weekend’s game in mind – Pulisic will presumably feature – but it was little more than change for change’s sake. Mount or Barkley should have replaced Kovacic: that was the sub, that would have altered the dynamic.

Maybe that’s too much analysis for this sort of game, but without altering the blend in that midfield, Chelsea’s role in the game was never likely to change. And, ultimately, if Lampard is to develop as a tactician, then these are the games which can be used to refine his craft.

It’s worth a debate about the Super Cup’s importance within a footballing calendar which is becoming increasingly congested. In pre-season, Klopp spoke out about the growing physical burden on players and what the long-term effect of that might be.

Was it absolutely necessary for two sides fresh out of pre-season to slog away for an extra half an hour for the sake of legitimising an illusory title?

12) Chelsea’s second was born from that fatigue, well-constructed as it was. A cheap giveaway from Pedro, an out of position Cesar Azpilicueta failing to cover the space behind him, and a knackered Kante unable to make up the ground to cover Mane.

A lovely move, with another fine bit of Firmino architecture, and a terrific finish, but not a moment which will reassure the many Chelsea supporters who remain unconvinced by Jorginho’s defensive instincts.

13) Penalty? No, but hopefully it makes sense to say that it’s a good thing VAR didn’t interfere. Tammy Abraham almost certainly dived and the way he fell seemed suspiciously unnatural, but even with a long break in the play and dozens of replays in ultra slow motion, it would have been impossible to prove that the referee made a clear and obvious mistake.

Not everyone will agree and, most likely, Adrian has been done a disservice with the effect of tarnishing a good performance. Even so, the spectacle remains more important; if a mistake has been made and can be proven, VAR is most welcome. If it can’t be – if the error isn’t egregious – then the default cannot be to spend minutes forensically examining what would still remain a subjective decision.

There are obvious flaws in that perspective, that’s true, but it’s the lesser of two evils and there must be more deference to the people inside the ground.

14) And the referee had a relatively good game. It wasn’t important for Stephanie Frappart to be perfect and it didn’t matter that some of the 50-50 decisions were contentious. Even if the penalty call was probably incorrect, it was easy to see how and why she made that mistake.

No, what really mattered was that all the silly mistruths were defeated and that the contrived fears about women officiating men’s football were proven to be hollow and foolish. What was the effect of her appointment? Nothing at all, it was exactly the same. And that’s the point: no better, no worse, no different in any way.

15) Maybe Abraham needed that final penalty in the shootout to go in? Not because losing the Super Cup will shape Chelsea’s season, but because he’s got a short period of time to prove his worth. Lampard has faith in him, but it won’t be endless and, in Giroud, Abraham has a seasoned and highly capable positional rival.

So the clock’s ticking. He didn’t take take his one good chance on Sunday and that could have changed the game. In Istanbul, he didn’t let anyone down – he obviously ‘earned’ the equalising penalty – but converting in the shootout would have been an easy win for him. Another reason for people not to doubt him.

As it is, with each game the pressure is going to intensify. He belongs in the Premier League, but he’s got a finite amount of time to conclusively prove that he can operate at its highest level, because that transfer ban is not going to last forever.

16) Maybe next time Aleksander Ceferin gives one of his pious lectures about growing the game beyond the established nations, it’s worth dwelling on who benefits most from his organisation’s hosting decisions. We’ve had Baku, of course – wasn’t that terrific?! – but the next Champions League final will also be in Turkey, the 2020 Europa League will be staged in Gdansk, Poland, and the next edition of the European u21 Championship will be partially hosted in Hungary.

Excellent news for, among others, the governments of Recep Erdogan and Viktor Orban. Being political about this is tedious – fair enough – but sportswashing is one of the greatest threats there is to modern football, yet the President of UEFA seems only half-hearted in his desire to challenge it.