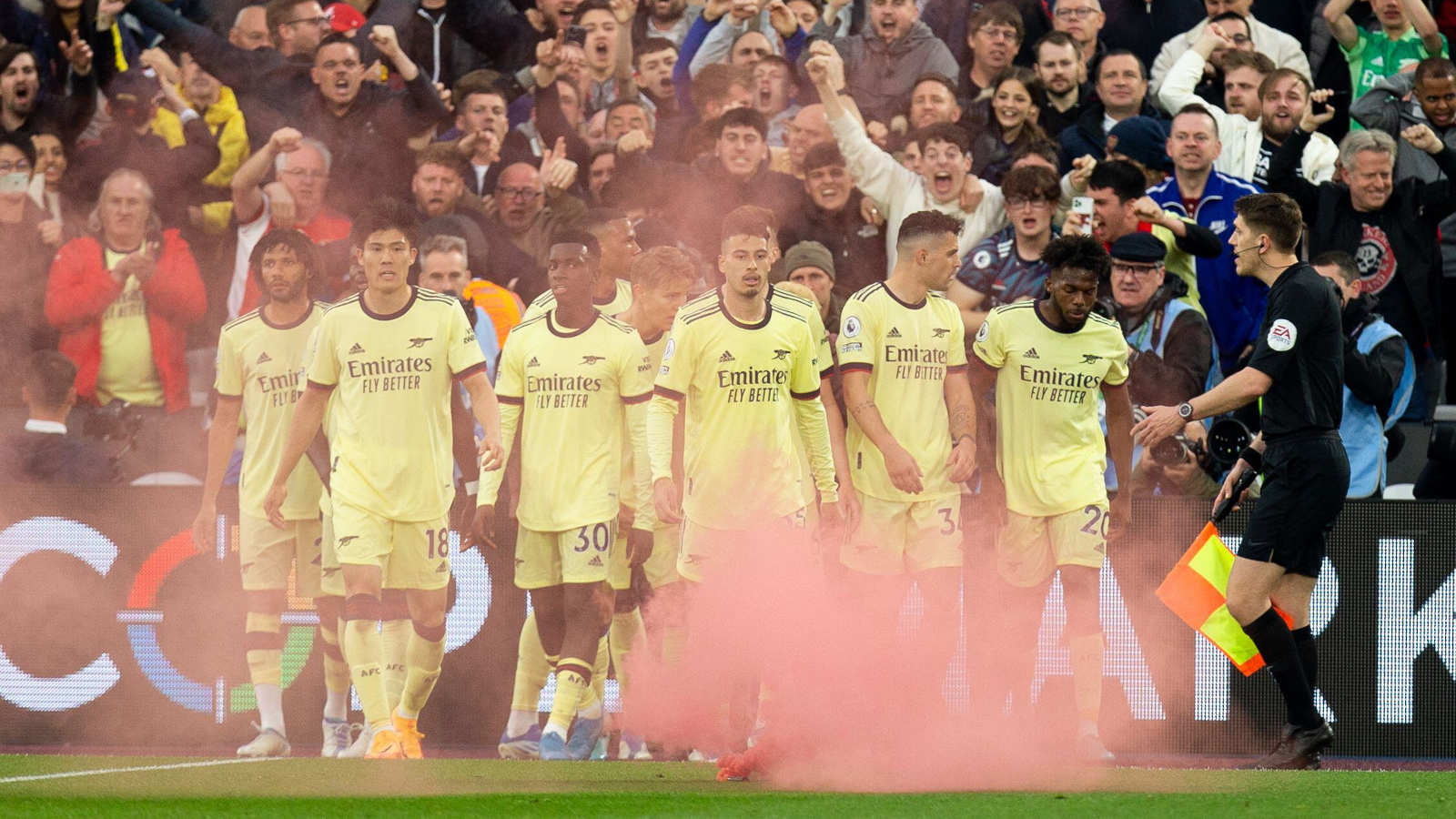 West Ham are deflating after two successive 2-1 home defeats, but Arsenal did just enough to keep the pot boiling for a fourth-place finish.

1) For West Ham United, this season has been as much a question of identity as anything else. Other teams have taken it less than seriously and it might well be argued that they are paying a steep price for committing themselves, but their run to the semi-finals of the Europa League has given West Ham United something to coalesce round this season, and after their fractious move to The London Stadium, this has mattered.

But Arsenal at home after their defeat to Eintracht Frankfurt in their Europa League semi-final first leg was always going to be a true test. With such a defeat as the Eintracht result, those aches and pains from what has already been a punishing season start to feel all the more pronounced; when you’re running on fumes, it’s best to be going downhill. West Ham had won just one of their previous five, but they remained just three points behind Manchester United for a place in next season’s Europa League, and with Wolves nipping at their heels – three points behind them but with a game in hand, despite their surprise turning over by Brighton – they needed to regain some momentum.

2) With Europe not a consideration, Arsenal arrived at The London Stadium as rested as they could realistically hope to be at this point of the season and fresh off the back of scoring seven goals in their previous two games against Chelsea and Manchester United. Coupled with Spurs’ no-shows in front of goal against Brighton and Brentford, they were back on the front foot in the increasingly undignified race for fourth place, but for all that, Spurs’ 3-1 win against Leicester earlier in the afternoon had served as a reminder that, for all the fatalism coming from up the road, that race isn’t quite over yet.

3) It therefore came as something of a surprise that the first 35 minutes of this match saw West Ham the better team, although it should be added that it was a particularly soporific start from both teams, clumsy and careless, with stray passes aplenty and anguished groans from the crowd as both teams struggled to come to terms with taking control of the game. Where West Ham’s carelessness could perhaps be explained by tiredness or an unfamiliar-looking starting line-up, Arsenal had really no such excuse.

4) But the cost of having that unfamiliar defence did end up costing West Ham, seven minutes from half-time. Eddie Nketiah has been enjoying something of a renaissance in 2022, and he was given ample space to drive in a low shot after 37 minutes which Lukasz Fabianski did well to palm away. It proved to be very temporary respite. From the resulting corner, Rob Holding arrived completely unmarked to thump a header in as the West Ham defence stood idling. This was Holding’s first Premier League goal, and the third of a senior career which has began on loan from Bolton Wanderers at Bury in April 2015.

5) The goal seemed to shake West Ham awake. Aaron Ramsdale’s save from Declan Rice should be lauded as one of the saves of the season, scooping a flicked header out from under the crossbar with lightning reactions and the strength in his hand to force the ball up and over the crossbar, but it might even end up debatable whether this was the save of the day, considering Jordan Pickford’s heroics for Everton against Chelsea earlier on.

6) But it still required a touch of luck to bring West Ham back into the game, right on half-time. Arsenal had looked creaky again since they took the lead, and their sloppiness ended up costing them when Jarrod Bowen (by far their greatest goal threat, with Michail Antonio on the substitutes’ bench) shot past Ramsdale to bring West Ham level. The replay showed the ball had nicked quite substantially off Gabriel’s backside to wrong-foot the goalkeeper, but it was no less than West Ham deserved for keeping the fight going after having fallen behind.

7) Ten minutes into the second half came the moment that would end up determining the destination of the points. Bukayo Saka tried to beat Fabanski at his near post, only for the goalkeeper to beat the ball behind, and from the resulting corner another Arsenal centre-back, this time Gabriel, jumped to head home Martinelli’s cross after Saka’s corner was cleared. West Ham’s Makeshift Defence 0-2 Arsenal’s Centre-backs, both goals from corners.

It felt like the costs of being so defensively stretched were playing out in front of us. In open play, a soft defensive underbelly can be masked by packing the midfield and dropping deep, but set-pieces expose that weakness more clearly. There was no challenge of significance to the scorer of either Arsenal goal.

8) West Ham had to weather a storm in the immediate aftermath of the second Arsenal goal, but they did so reasonably effectively and did start to reassert themselves as the second half reached its midway point. Both teams played most of the match in fits and starts, and by the time that we got to the last 20 minutes, everything was starting to go somewhat stale again.

9) Michail Antonio was finally introduced with 20 minutes to play. The decision to play Manuel Lanzini had not been remotely successful; it feels as though he is too similar a player to Said Benrahma for them to both be accommodated on the pitch at the same time, and Lanzini had been missing in action for both of the corners from which Arsenal scored. In truth, both Lanzini and Benrahma looked out of sorts on this particular occasion and Benrahma was also replaced ten minutes later by Andriy Yarmolenko.

10) Arsenal could still threaten on the break, although by the last 20 minutes West Ham were starting to control possession again. But opportunities to kill the game off did still fall for Arsenal. With 17 minutes to play, when Eddie Nketiah got clear and, from a bit of an angle, curled the ball round Fabianski’s out-stretched hand but also a couple of inches wide of the left-hand post too. Six minutes later it happened again: Nketiah, again.

11) But as things turned out, Arsenal didn’t need to worry about what these two missed opportunities – and it is worth pointing out that neither of them were easy – might end up costing them. Antonio never fully settled into the game after coming on, and although West Ham had plenty of the ball throughout the last ten minutes, they didn’t create anything much with it and seldom looked like threatening the Arsenal goal. The match didn’t so much build towards a climax as slowly deflate, with Arsenal seemingly happy to hold onto what they had and West Ham just looking a little too tired to unpick them.

12) There was, at least, time for some undignified pushing and shoving at the end, as Arsenal sought to game their way through stoppage-time. As the clock ticked past 90 minutes Nketiah prevented West Ham from taking a free-kick, earning himself both a yellow card and a sustained lecture from a furious-looking Declan Rice, who had to be restrained by his own team-mates. Rice presumably came through it all feeling as though he’d got his point across, but his inability to wind his neck in did probably cost West Ham a quarter of the four minutes of stoppage-time that had been signalled from the sidelines.

13) This time last year, West Ham United were approaching the end of a run three defeats in four Premier League matches which ultimately torpedoed their chances of qualifying for this season’s Champions League. They finished two points short of Chelsea. One win from those three lost matches against Newcastle, Chelsea and Everton would have seen them climb into fourth place. Two would have seen them finish above Liverpool in third. West Ham have now lost three of their last four Premier League matches at exactly the same time of the season again, and history has repeated itself, with a decent chance of making fourth place having tailed off.

Last season, perhaps there was an element of inexperience. This time around, there seems to be an even more obvious culprit: tiredness. This was West Ham’s 52nd competitive game of the season in all competitions. It was Arsenal’s 41st. Small wonder the home side looked increasingly tired as the game progressed; it’s notable that, for all the possession West Ham enjoyed throughout the second half, they only had two shots on goal, neither of which were on target. A combination of that and being just too soft on set-pieces was ultimately enough to see Arsenal back to north London with all three points.

14) And now West Ham have to do it all again, this time back in the Europa League. Their home defeat to Eintracht Frankfurt in the first leg of their semi-final was not a calamity, but they have left themselves a lot to do in the return match in Germany. And this remains a very, very important match. Not only has this competition given the club a rallying point, but West Ham have not won a major trophy now in 43 years and it represents their last chance of finally nabbing a Champions League place for next season. West Ham now need one last push to have a chance of making the final. The concern is that they do not, even if for reasons that are really beyond their control, look ready for it.

15) This is the point of the season when the style of football matters considerably less than getting points on the board, and Mikel Arteta is fully entitled to not give a damn if his team didn’t rip up any trees in grinding out this win. They remain a young team and their heads aren’t always the coolest, but this is as good a chance as they’ve had of making the Champions League for the first time since 2016, and grinding out results is an artform, one that Arsenal have been missing at crucial points in the season for several years. He’ll be very pleased with how straightforward his defence found it to keep West Ham out, and that they took their set-piece chances efficiently.

16) And the race for fourth place remains as narrow as ever. Arsenal may well lead Spurs by five points by the time the two teams come to play each other at The Tottenham Hotspur Stadium on May 12, with Spurs facing a daunting-looking trip to Anfield in their next match. If that is the case, a win in the North London Derby would put the matter beyond any doubt at all. Arsenal remain in control of their own destiny for now, and the only question left is this: do they have the nerve to finish the job? On the evidence of this win, they’re plenty capable.