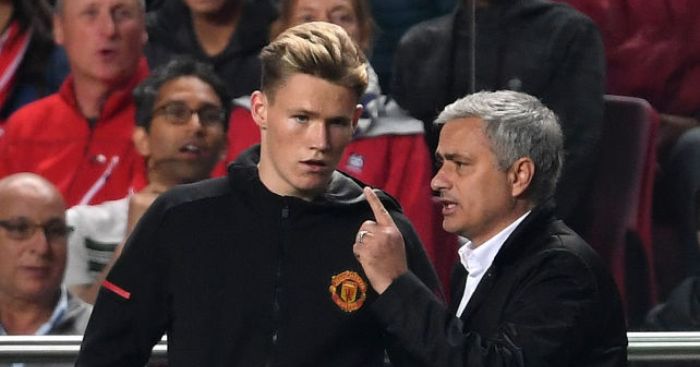 1) It came as little surprise when Jose Mourinho threw a brown paper bag over Scott McTominay’s head and assembled his Tottenham side in a sort of presidential motorcade formation towards the end of their pulsating, maddening and actual 3-3 draw with Manchester United that definitely happened on Sunday.

McTominay, the scorer of a first-half hat-trick, had tormented the hosts all afternoon. A 30-yard piledriven opener was followed by a routine overhead kick and a diving header from outside the area as Tottenham summarily failed to cope with his generational talent and athleticism.

But Mourinho’s actions at the culmination of this bizarre game were a pertinent reminder. It was he who gave McTominay his chance, he who first noticed his brilliance when scouting Scottish youth tournaments in the early 2000s and he who bestowed upon him that wonderful high skin fade. This game had no winner – except, as ever, for Mourinho.

2) Having said that, Graeme Souness went a little overboard with his half-time praise. Declaring Sergio Busquets “the Catalonian McSauce” was one thing but it was quite uncomfortable viewing when, beclad with full face paint, he started to straddle Gary Neville while screaming about “freedom”.

3) It was a welcome departure from his usual character assassination of Paul Pogba, which occurred soon after the final whistle. He is not wrong in suggesting that giving Mrs Brown’s Boys a lucrative Saturday evening television slot – or one of any kind – is setting a bad example to humanity. It just felt somewhat churlish to demand that Pogba shoulder that responsibility.

It mattered not that Pogba was not part of the matchday squad; Souness blamed his hairstyle for Harry Maguire falling over and Andreas Pereira not yet having been sold despite it being March. And as someone who was famously sans body hair throughout his entire playing career, he might have a point.

4) Pogba at least outperformed his compatriot. Mourinho was kind enough not to namedrop the culprit, referencing only “a certain agitator, for privacy’s sake let’s call him ‘Tanguy N’… no, that’s too obvious…erm, T Ndombele” in his post-match interview.

As if the decision to bring him on as a substitute in the second minute and replace him 20 seconds later with the lingering memory of Maniche was not pointed enough, this was an explicit reminder that what was once a career burgeoning with great promise has been sacrificed to the assorted football gods.

5) By the time Tottenham had their first touch of any kind after four minutes and 27 seconds, the pattern of the game had long been established. United dominated possession while Tottenham sat back with two banks of five settled deep into their own half. Not since Stephen Mulhern became a national treasure has there been a more accommodating host.

It can be quite jarring to watch a home side actively walk away from the ball as soon as they retrieve it. Mourinho, even two decades into an irreplicable managerial career, continues to tactically innovate.

6) The problem came when United realised that Tottenham were literally terrified of possession. When Toby Alderweireld shrieked because an errant Anthony Martial pass came within ten feet of him, the facade was over.

A few minutes later, Bruno Fernandes drifted past the statuesque Eric Dier in a moment that encapsulated most of the game. It was a bit much that the Portuguese paused to actually pull his opponent’s pants down – the implication was enough – but the imagery was powerful nonetheless.

7) That was the prelude to McTominay’s scorching effort. Fernandes had ventured into roughly five acres of space and played the ball a few yards ahead of the Scot for him to run onto. There was an audible gasp around the stadium: not at the wonderful long-range finish but at the temerity of a player daring to make a forward pass.

Mourinho requested the intervention of VAR before realising that the only clear and obvious Tottenham error this season was discarding the antidote before administering the managerial poison.

8) The second came soon after, when Ben Davies suffered an existential crisis when considering whether or not to track back from a rare attack. This can be at least partially explained by his new-found status as Schrödinger’s left-back: placed in a locked box with no key and something that could strain a hamstring or damage an ankle ligament, he is forever destined to be simultaneously available and injured. There is more than a modicum of sympathy for someone who will view match fitness as an abstract concept. He is 26 and the apocalypse is upon us.

9) Aaron Wan-Bissaka was able to punish the Davies mistake, having become the most potent attacking weapon in the history of United’s right flank. It was a sumptuous cross which left McTominay with the simple task of showing Hugo Lloris to be an utter charlatan.

Wan-Bissaka’s defensive work deserves credit, mind. To make 305 tackles in a single game cannot be understated, particularly as he was taken off on the hour mark. Those impressive statistics started to look a little farcical when he began passing the ball to Lucas Moura after discovering he has all the retention skills of a bucket with a hole kicked through it, but still.

10) McTominay completed his hat-trick by the 31st minute but United were unfortunate not to be four goals ahead when Mike Dean started whistling Sandstorm by Darude to signal half-time.

Tottenham had conceded a throw-in deep in their own half in an effort to stem the tide. The ball was directed towards Lloris who, distracted by Paulo Gazzaniga’s inexplicable handsomeness, allowed the ball to roll over his foot and into the net.

It was, of course, a foul throw: Serge Aurier had taken it. Unsure of how to proceed and aware history was being made, Dean awarded a corner to United. They obviously didn’t score.

11) Tottenham’s recovery began as it often tends to: at the feet of Giovani Lo Celso. Fifteen minutes into the second half, he managed to isolate Nemanja Matic like a virile lion cornering and challenging the declining leader of the pride. Matic has improved notably of late but is still only able to move in instalments, like a PC struggling through its latest Windows software update.

Lo Celso galloped into the penalty area and crossed for Troy Parrott to score. Mourinho immediately substituted him.

12) But the hosts were resurgent. Erik Lamela whipped out his rabona, Dele Alli did a load of those little flicks that are bloody infuriating when they don’t come off but otherwise make him look like the illegitimate spawn of Ronaldinho and Zinedine Zidane, and Lucas tried really, really hard.

United stood firm as long as they could, but Tottenham’s first goal opened the floodgates. Maguire started heading literally anything in his peripheral vision, Wan-Bissaka had started channelling Eden Hazard by tackling ball boys, and Victor Lindelof is about as futile in the face of an aerial bombardment as buying all the toilet paper and hand sanitiser within a 50-mile radius, thus rendering the local population as unhygienic as possible.

Jan Vertonghen took full advantage, banishing Brandon Williams to his room with no dessert,and barrelling past Luke Shaw to score. David de Gea probably shouldn’t have jumped over the ball but then he is continuing to gradually punish United for destroying their own fax machine that one time.

13) The comeback was complete when Dan James scored an own goal in stoppage time. The Welshman should be commended for sprinting 100m in 5.78 seconds to thwart a counter-attack, but it was being led by a Lucas playing neither in Amsterdam nor against Huddersfield.

James continues to frustrate a large section of the support. The fact is that if and when his pace is properly weaponised, he could immobilise a small country. Plus he is a skilful, Welsh forward playing for Manchester United. It is worth at least trying to channel and emulate a club legend like Daniel Nardiello.

14) Solskjaer was left having to try and swing the momentum that had for so long weighed in United’s favour. His response was to tell Pereira to get ready to warm-up and come on, only to shout ‘WE ARE MANCHESTER UNITED THIS IS NOT GOOD ENOUGH THE UNITED WAY FERGIE’S PARKING SPOT NOU CAMP CORNERS’ directly in his face.

Odion Ighalo would replace Martial instead.

But it has to be said that there doesn’t seem to be much of a way back for Pereira after that. Considering the Tottenham and United fans cheered in unison at his public admonishment, it was rather stark.

15) Ighalo, to his credit, did precisely as was expected. United started peppering him with long balls from defence and each stuck to him with consummate ease.

To break the seasonal record for Opta-defined ‘holding up the ball by primarily using your arse’, despite playing less than two minutes, is to be admired. He has been the signing of the season.

16) That final statement will also be true next season when United sign him permanently. The £15m it will take to persuade Shanghai Shenhua looks like a snip, particularly considering Ed Woodward has an entire summer to leak speculation to the media, negotiate furiously and drive the fee down to just £15m.

He will likely have to compete with Daniel Levy, with Mourinho tenderly stroking the striker as he hurried off the field with an abducted McTominay. Tottenham cannot possibly be expected to play with any discernible style without Harry Kane, Heung-min Son or Ighalo, after all.