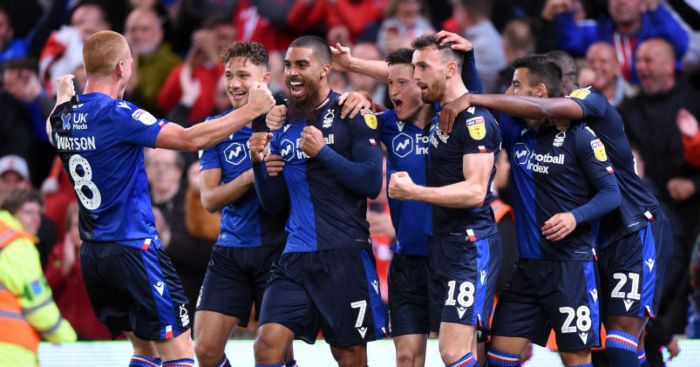 1) It may not have lasted beyond Saturday afternoon, but almost 24 hours of table-topping triumph for Nottingham Forest after five long years of waiting was perhaps the sweetest nectar to touch EFL tongues over the weekend.

What makes Forest’s success all the sweeter is – like many of the division’s frontrunners – how surprising it is to see them competing against the likes of Fulham and West Brom for one of three Premier League promotion places.

With a squad more bloated than my belly after a full Yorkshire Sunday roast – and with twice as many puddings occupying a place on the squad numbers list – manager Sabri Lamouchi has struck the correct balance between youth and experience, effective attack and stable defending, winning against the odds.

They may have struck lucky gold with the equaliser but in football, you make your own luck and Lamouchi has goodwill and fortune in bucketloads in NG2.

2) For half an hour, Stoke City did not play like we had come to expect from them. Dangerous on the break, imperious in defence, and looking every inch a team that should be battling at the right end of the Championship table.

If a game of football ever had a turning point though, then it was in Jack Butland’s fifth error of the season gifting Forest their equaliser by dropping a tame cross that either should have been punched away or caught comfortably by a keeper of his quality – albeit absent in recent months.

As easy as it would be to lay the blame for this defeat at the door of the England international, the game changed not on the scoreline being 1-1 on the 30-minute mark but rather in Butland’s teammates’ response to a setback. A squad chock-full of experienced internationals and players apparently too good for this level should not be affected by obstructions to success quite this much.

Whether that comes down to the management, the boardroom, or is even borne in understandably negative air from the stands, the end result is always the same, and that cannot continue to be the case lest the Potters crash into League One come May. In the face of adversity, this Stoke City side hide in the shadows.

3) Staying in the Midlands, and to Derby County and a victory which surpasses the phrase ‘must-win’ by a furlong. After a punishing week in the Derbyshire capital for Philip Cocu’s side, a local derby against Birmingham City could have been, if not make or break, then certainly enough to put some nails in the coffin of this early season.

A second win of the campaign now means it is just a couple of defeats in nine games for the Rams this term and they are looking up at the start of this long-term project. But most importantly, after a week involving the ‘alcohol-fuelled’ situation involving Tom Lawrence and Mason Bennett resulting in former captain Richard Keogh’s potentially career-ending injury, this was a flicker of light at the end of the tunnel.

4) But the brightest light burns for a returning star. Half a decade ago, Chris Martin was one of the most deadly strikers in the Championship; the last 24 months have proven to be the most difficult in the 30-year-old’s career.

Just one and two-goal returns in loan spells at Reading and Hull City in each of the last two seasons made it look like Martin’s career at this level was over, but the last-minute equaliser against Leeds paved way for Saturday’s earliest goal from the former Norwich City forward. In a team depleted of stars, former ones are coming back to the surface.

5) Back in pre-season, I took myself off of each and every Sheffield Wednesday fan’s Christmas card list with a piece on the Owls and a future of no hope. It is safe to say I did not envisage that, when a decision was finally made on a new manager, it would work out like this.

Wednesday’s 4-1 victory at Middlesbrough offered redemption for Garry Monk at his former employers while the Owls sit pretty in seventh place. I said when Steve Bruce departed for Newcastle United, Wednesday would struggle to find a manager of his pedigree to keep the good work up.

I was right: Monk has so far shown to excel himself far beyond his permanent S6 predecessor.

6) The Championship season began with surprise early leaders Swansea City and Charlton Athletic entertaining and shocking in equal measure, but both sides started to lose form around the first international break of the campaign.

Preston North End, Wednesday and Forest have each suffered slight stuttering spells at some point this term but are all on excellent runs, while Leeds United have won just two of their last five. Luton Town have scored more than all but two members of the current top six while leaders West Brom have conceded three more times than 14th-placed Brentford.

All in all, it adds up to the antonymic tonic to the Premier League. This truly is a division that can be won and lost by anyone. Liverpool lead the top flight by five points. After two more rounds of fixtures, just six points separate the entire top half.

7) Super Sunday indeed. Before the titanic clash that was Leicester City v Newcastle United, the two lowest scorers in the second tier, Barnsley and Brentford, went head-to-head at a rain-soaked Oakwell and produced a surprisingly entertaining contest.

The man to come away with the biggest plaudits, as ever this season, was Ollie Watkins. It is important to remember that he is a forward, not an out-and-out striker, yet the former Exeter City man has scored a higher proportion of his side’s goals than any other player in the EFL this season with his latest contribution a hat-trick. If he keeps this up, the Bees will have more money to invest in their long-term project.

8) For Barnsley, however, they are in danger of joining Stoke and Yorkshire rivals Huddersfield Town in being cast aside from the rest of the Championship. If the top of the division is everyone’s to win, then the bottom three is already becoming clear.

The Tykes used up all their promotion-winning momentum from last season in their incredible opening-day win over relegated Fulham, only to pick up two points from their last eight outings.

Manager Daniel Stendel had an excellent debut season in England, but must stand up and be counted now in the first tough spell of his Barnsley career.

Not for the first time this season for the Tykes, it was men against boys.

9) When making conclusions, it is easy to allow yourself to be drawn to the sides at either end of the table, but those in the middle also have stories to tell. For Millwall, it is becoming an all-too-familiar tale.

They are lowly, but not low enough to merit serious discussion about the future of manager Neil Harris. They are defending well, but not scoring enough to make it count. They are capable of football to get the fans off their seats, but it is too often a rarity.

Drawing away at Huddersfield need not be disastrous, but it does little to raise spirits at the New Den. Six league games without a win – four of those against fellow bottom-half sides – means this is already shaping up to be another season of no bite for the Lions.

10) For Rochdale, Crawley Town and Colchester United, it was back to reality after their midweek EFL Cup heroics. The Dale went down 3-0 at home to Wycombe Wanderers while the other two lost 3-2 to Walsall and drew 1-1 at Macclesfield Town respectively.

After the highs of nearly knocking out Manchester United and defeating former Premier League sides and top-flight giants, returns to league action can always be something of a damp squib – and all too literally on this rainy weekend.

Each of the sides in the top seven have showcased why they have the quality to play a level above, and for some, it has been a long time coming. Exeter and Newport have both made multiple appearances in the play-offs in recent years while Forest Green have been punching towards the top of the table ever since arriving in the Football League in 2017. It appears that, for a couple at least, League One football will finally be achieved next May.

12) Oxford United may only be 10th in League One, but you would be hard-pressed to find a team in better short-term form than Karl Robinson’s side. That 4-0 EFL Cup win over West Ham United was sandwiched between last weekend’s 6-0 triumph at Lincoln and Saturday’s 3-0 victory at home to Gillingham.

A tough start to the current campaign leaves them four points short of the play-off places, but be forewarned: this is a side with plenty of depth – as evidenced by the hefty amount of changes made for the match against the Hammers – and great individual talent.

Add in the fact that they have now gone five matches without conceding and Oxford all of a sudden look like serious contenders for promotion.

13) Ipswich Town’s match-up with a struggling Tranmere Rovers side provided the perfect opportunity to make it three wins in a row. They duly delivered – even without former Rovers hot shot James Norwood getting his name on the scoresheet.

Having won each of their last two games 1-0, this match showcased the free-scoring qualities of a side littered with experience and youthful exuberance in the right areas. We expected the Tractor Boys to struggle to adjust to the division, but they keep rolling on. A trip to Fleetwood Town on Saturday provides one of the sternest tests of their credentials. Win that and an immediate return to the second tier becomes odds-on.

14) Conversely, Portsmouth – another side expected by most to take League One at a canter – are not living up to expectations, but a win against troubled Bolton Wanderers could be crucial to Kenny Jackett’s strugglers.

Three points and a clean sheet should never be sniffed at, but anything less at home to Bolton could have left Jackett reaching for his coat. Next weekend’s trip to Doncaster will show what Portsmouth are really capable of.

15) Before Saturday’s match, Leyton Orient manager Ross Embleton announced his decision to return to the assistant manager role he so flourished in under the late, great Justin Edinburgh.

His team did him proud in possibly his last game in charge with Josh Wright fittingly scoring a last-minute equaliser in the 3-3 draw at home to Port Vale, and it’s another point on the board towards survival to keep Edinburgh’s hard work worth it come May.

If Orient can continue at this pace, and with just one team going down from League Two this season, it will be one of the greatest achievements in the EFL given the turmoil of the last six months.

16) One wonders what the El Clasico nickname would be for Salford City v Forest Green Rovers; two of the more despised and ridiculed EFL clubs. That is still to be decided, but one thing is for sure: the Ammies are not the Real deal of League Two.

Just like with the third tier, the majority of social media experts had Graham Alexander’s side spending just one season in League Two. They might well be right. Until this weekend, Salford had been solid but by no means spectacular.

But going down by four goals to Mark Cooper’s outfit made for the most catastrophic of results to leave the Lancashire side seven points adrift of the top seven already. For a club with such lofty ambitions, their debut EFL season already looks a disappointment. When is the next season of Class of ’92 starting again?