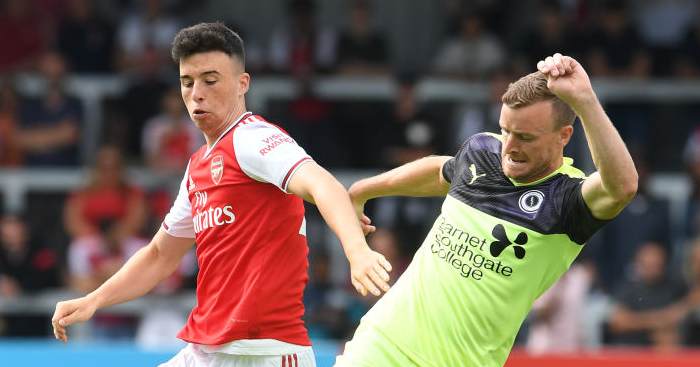 AC Milan and Juventus are interested in signing Arsenal starlet Sam Greenwood, according to a report.

The Serie A giants “sent scouts to track his progress at the Under-17 European Championships this summer”, reports The Sun.

Greenwood, 17, impressed at the tournament for England with three goals in three games on the back of a season with Arsenal’s U18s in which he hit 10 goals and five assists in 21 appearances.

The report also claims that clubs from Germany are interested in Greenwood, but with ex-Arsenal man Ivan Gazidis as the current Milan chief executive, the rossoneri will be favourites for his signature.

Gazidis was at The Emirates when Arsenal signed the winger from Sunderland last summer, after the 16-year-old blasted 21 goals in 26 games for Sunderland’s under-16 and under-18 teams in 2017/18.

He joined Arsenal on a free transfer, with the Gunners paying Sunderland a development fee.

“I was both excited and apprehensive about coming down from Sunderland to join Arsenal. Leaving my town, friends and family was quite daunting, it felt like a big task, but I was keen to push myself and now that I’m here I feel fully settled,” Greenwood toldArsenal.com in September 2018.

“Even where I live in digs in St Albans, it feels busier than back home. I live in the home of our landlady Rachel with Alfie Matthews, who is also a scholar. That’s been a big help because we talk about all things football and support each other. I’m very much enjoying being at a big club like Arsenal.

“It’s a big challenge for me and I’m relishing it. I’m at a club where I feel I can take myself to a new level.”