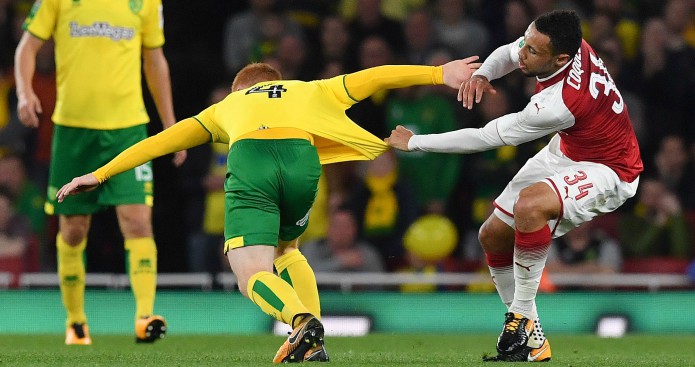 What the shitting fuck was that from Coquelin?!

Coquelin has played a grand total of 67 minutes in the Premier League this season, which is roughly 67 minutes too much. A reminder, were it required, that he signed a ‘long-term contract’ earlier this year. Yes, in 2017.

ANTHONY MARTIAL (Manchester United)
According to The Independent, Jose Mourinho reserved his harshest words post-Huddersfield for Ander Herrera and Antony Martial, with the words ‘Ivan’ and ‘Perisic’ being uttered out loud; it was for games like these that he wanted a proper winger. Instead he got Martial, who was first rattled and then shackled by Tommy Smith before being substituted.

On Tuesday he got another chance against Swansea City and the worst thing happened: He created little of any real note while Jesse Lingard scored twice. It now seems inconceivable that he will start against Tottenham on Saturday.

ROQUE MESA (Swansea City)
“He has a long term contract and we want him here but the opportunities are there and he and others have to take them,” said Swansea manager Paul Clement of an £11m signing who has not even made the bench for the Swans’ last two Premier League games. Mesa himself has made a few noises about leaving south Wales, and his exit will not be mourned after 67 pretty woeful minutes against Manchester United.

The local newspaper described his performance thus: ‘A real disappointment. Some touches of class on the ball when switching play but looked a little boy lost in his positioning.’ ‘Little boy lost’ is not a good look on a 28-year-old.

Clement on Roque Mesa: “I thought he did OK, he did some things that were OK. [He made] a couple of mistake as well. So, average.” #swans

ELIAQUIM MANGALA (Manchester City)
We don’t usually do that lazy ‘Twitter reacts to’ thing, but sometimes it’s better to consult the collective about a Frenchman who was destroyed by Wolves…

Imagine a back 3 of Lovren, Lindelof and Mangala…

In an incredible turn of events, Mangala has actually got worse.

Eliaquim Mangala wasted his chance tonight. Don't be surprised if doesn't play for City again. Tosin was better than him tonight.

Expect Tosin Adarabioyo to replace him on the bench this weekend. Or expect riots.

ANDY KING (Leicester City)
“I would like to finish my career with City,” said Andy King earlier this month. Well, that might come sooner than he would have hoped after he failed to close down Pablo Hernandez for Leeds’ opener. Handed a Carabao Cup start after losing his Premier League place to the impressive Vicente Iborra, King did not grasp the opportunity with even one hand and can expect to be back on the bench this weekend. Which is only right.

Give Huddersfield 5 million and Andy King for Wagner.

CRYSTAL PALACE (Crystal Palace)
Yes, all of them.