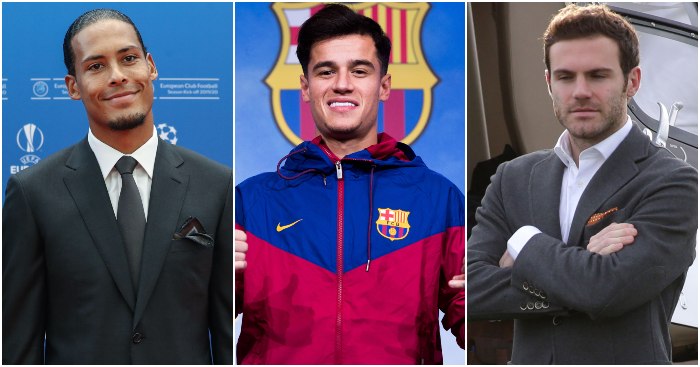 20) Krysztof Piatek (Genoa to Milan – £30.9m)
Thirteen goals in his first nine games of the 18/19 season was enough for Krysztof Piatek to spark something of a striker merry-go-round across Europe. His form caught the attention of Serie A rivals Milan, who cut Gonzalo Higuain’s loan short to accommodate him. Chelsea swooped for the Argentine, with Alvaro Morata heading to Spain. And it all started with Piatek, who promptly flopped. A year later, he is on his way to Hertha Berlin for £23.5m.

19) Jackson Martinez (Atletico Madrid to Guangzhou Evergrande – £31m)
Those in charge of recruitment at Guangzhou Evergrande are clearly fans of Portuguese football, but refuse to watch La Liga. That is the only way of explaining the £31m fee the Chinese Super League club paid for Jackson Martinez, who had scored three goals in 22 games at Atletico Madrid. Six months after moving to China, Martinez was back in Portugal on loan at Portimonense. A permanent move has brought zero goals in 13 league games and a relegation battle.

18) Edin Dzeko (Wolfsburg to Manchester City – £31.5m)
Football is a fickle beast, and Edin Dzeko learned that lesson the hard way in 2015. The striker scored 72 goals in 189 games for Manchester City despite never being a regular starter, including a crucial 16 goals in the title-winning 2013/14 season. By January 2015 he was discarded for Wilfried bloody Bony. And he is still scoring goals for Roma.

16) Dejan Kulusevski (Atalanta to Juventus – £31.5m)
Atalanta have done rather well out of the Swede who joined aged just 16. He played barely 100 minutes for the club before being sent on loan to Parma, where his form earned him a big-money move to Juventus this January. For now, he goes back to Parma and their quest for an unlikely return to European football.

15) Andy Carroll (Newcastle to Liverpool – £35m)
If only Kenny Dalglish had stopped at Luis Suarez. The wonderful image of the former Liverpool manager standing proudly with the Uruguayan and Andy Carroll, his two January 2011 signings, exists to remind us all that transfers are rather difficult to master. Suarez shone, but Carroll was a big elbowy fish out of water.

14) Cedric Bakambu (Villarreal to Beijing Guoan – £35.4m)
After becoming the first and only African to win La Liga’s Player of the Month award, Bakambu took the money and ran to China. The deal wasn’t completed until March 2018 but his contract with Villarreal was effectively torn up in January with the DR Congo star’s release clause eventually being paid in full. He has since scored 39 goals in 54 games for his Chinese club.

14) Leandro Paredes (Zenit to PSG – £36m)
The classic January transfer where a big club pays too much for an(y) available player before they sign their original targets (Idrissa Gueye and Ander Herrera) in the summer, rendering their £36m January signing a bit-part player.

12) Juan Mata (Chelsea to Manchester United – £37.1m)
David Moyes can count on one hand the things he got right in his ten months in charge at Manchester United. After listing his record-breaking tribute to Jesus Christ in the club’s 81-cross 2-2 draw with Fulham in February 2014, and pointing out that he kept Phil Neville in employment, the Scot would reserve space for the signings of Marouane Fellaini and Juan Mata. Both have endured difficult spells at Old Trafford, but the Spanish blogger remains a key part of Ole Gunnar Solskjaer’s squad.

9=) Lucas Moura (Sao Paulo to Paris Saint-Germain – £38m)
Neymar’s arrival at PSG squeezed Lucas Moura to the periphery of the PSG squad with the winger failing to make the matchday squad more often than not prior to Spurs coughing up £24million two years ago. And now he is about to be usurped by Stephen Bergwijn.

9=) Alex Teixeira (Shakhtar Donetsk to Jiangsu Suning – £38m)
Alex Teixeira’s move to Jiangsu Suning in 2016 was headline news in the Premier League. Jurgen Klopp was widely criticised for failing to sign the Brazilian, but the Reds seem to have put their disappointment behind them. The ‘like, want, need’ culture was exposed.

9=) Paulinho (Barcelona to Guangzhou Evergrande – £38m)
Barcelona were laughed at when they signed Paulinho from Guangzhou Evergrande for £36m in August 2017, but the tables turned so considerably after a fine season in Spain that the decision to loan him back a year later was equally confusing. Guangzhou completed the permanent signing of the 30-year-old last year and he scored 19 league goals to help them win the title. A hero.

8) Fernando Torres (Liverpool to Chelsea – £50m)
It still feels bizarre that Fernando Torres played eight more Premier League games for Chelsea than he did for Liverpool. The goal haul despite that – 20 at Chelsea and 65 at Liverpool – points to a career trajectory that suffered a sharp fall upon his move to Stamford Bridge in January 2011. And yet his four years with the Blues yielded a Champions League and Europa League trophy each.

7) Pierre-Emerick Aubameyang (Borussia Dortmund to Arsenal – £56m)
The Arsenal purse strings were loosened to bring in a proven goalscorer and score goals he duly did. He may have won nothing in two years but his 46 goals in 71 Premier League games is a phenomenal record that will likely earn him a last hurrah in Spain.

6) Diego Costa (Chelsea to Atletico Madrid – £57m)
Antonio Conte made it clear he wanted rid of Costa but he and Maurizio Sarri have both suffered from Chelsea’s failure to replace the Spain striker. The £57m the Blues received seemed a handsome sum for a player who had been exiled for the first half of last season but Chelsea spluffed that and more on Alvaro Morata. That was a mistake.

5) Aymeric Laporte (Athletic Bilbao to Manchester City – £57.2m)
The centre-back was in and out of Pep Guardiola’s XI after City coughed up a then club-record fee to get the 23-year-old out of his Athletic Bilbao contract but last season he was truly excellent as City won the title. His injury is undoubtedly one of the factors in City’s relative failure this season.

4) Christian Pulisic (Borussia Dortmund to Chelsea – £57.5m)
The USA winger signed for Chelsea in the first major deal of 2019 before promptly re-signing for Dortmund on loan for the rest of the season. But now he is a Chelsea player and it is all going okay. Not brilliant but definitely okay.

3) Oscar (Chelsea to Shanghai SIPG – £60m)
Receiving £57m for an unwanted Costa was a quite ludicrous magic trick from Chelsea, but even they would be hard pushed to outdo the £60m they raked in for Oscar, practically a reserve, in 2017. Jamie Carragher described it as “embarrassing” for the Brazilian, but he has 24 goals and 52 assists in 79 Super League matches, in addition to more money than God.

3) Bruno Fernandes (Sporting Lisbon to Manchester United – up to £67.7m)
Eventually, United got their man. Once United fans let Ed Woodward out of his driveway, he agreed a deal with Sporting worth an initial £46.6million up front with another £21.1million potentially to follow in add-ons, which include £840,000 for every five starts up to 25; £4.15million if United qualify for the Champions League within the next five years; and the same again if Fernandes wins the PFA Player of the Year or finishes in the Ballon d’Or top three.

2) Virgil van Dijk (Southampton to Liverpool – £75m)
This was the most expensive January deal ever when it went through on the first day of 2018 and the size of the fee took everyone by surprise. But it turns out that it was basically a bargain as he is the lynchpin to one of the greatest teams in Premier League history.

1) Philippe Coutinho (Liverpool to Barcelona – £142m)
Liverpool were merely delaying the inevitable when they resisted Barca’s three offers in summer 2017. The Spanish side had to wait half a season and chuck another £20million at the Reds but finally they got their man and Coutinho got his move. But the Brazilian is currently not quite enjoying a loan spell with Bayern Munich that might leave him in limbo this summer.