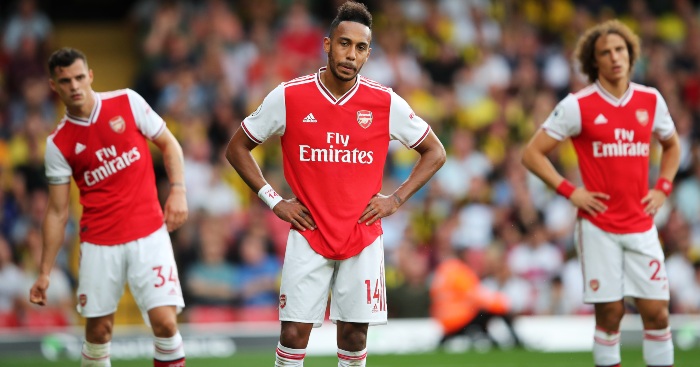 * Arsenal have made the highest number of errors (14) that have led to opposition goals in the Premier League since the start of last season. That is three more than Chelsea, Manchester City and Liverpool combined.

14 – Since the start of last season, Arsenal's players have made a combined 14 errors leading to opposition goals in the Premier League, at least two more than any other club in this time. Calamitous. pic.twitter.com/uylQrhAHHs

* The Gunners also hold the record for the highest number of errors leading to shots. Their total of 33 is almost double that of Newcastle (17).

* No side has conceded more goals from penalties since the start of last season. The Gunners and Brighton have both let in 10 from spot-kicks.

* Arsenal have conceded a penalty in each of their last three Premier League matches.

* Arsenal allowed Watford – the only Premier League team yet to win a match this season – 31 shots on Sunday, which is the most they have faced since Opta starting gathering such data in 2003-04.

* In the second half alone, Watford equalled their record for shots on goal in a single game since they returned to the Premier League in 2015, with 23 of their 31 shots coming after the break. Their previous record for 90 minutes was 23 attempted in games against West Ham, Sunderland and Hull.

* Arsenal have now allowed opponents 96 shots on their goal this season – the highest number of any Premier League team.

* Arsenal have allowed the same number of shots on their goal (96) this season as Chelsea and Manchester United combined (48 each).

* The Gunners faced as many shots on their goal on Sunday at Watford as Manchester City have all season.

* Arsenal allowed Watford 48 touches in their box on Sunday, the fourth-highest amount any team has managed in the Premier League this season, and only one touch fewer than Liverpool had against the Gunners last month.

* Arsenal have managed the fewest number of shots of any side in the Big Six this season.

* No player for any of the Big Six sides has been dribbled past more often than Matteo Guendouzi (10).

* Only Tottenham (7.4) have made fewer interceptions per game than Arsenal (8.4).

* Leno made eight saves against Watford – the highest number any keeper has had to make in a Premier League game this season.

* Only Aston Villa (38%) and Norwich (37%) have taken a greater percentage of their overall touches in their own defensive third this season than Arsenal (35%).

Bournemouth, Burnley, Crystal Palace, Norwich and Wolves have also been outshot in 4 of their 5 games pic.twitter.com/Y0VCzGChtb

* Having netted five of Arsenal’s eight goals, the Gabon striker accounts for 62% of Arsenal’s total goals this season. That figure was 30% through the whole of last season.

* Given how reliant they are on his goals, Arsenal need to hope that Aubameyang continues his improved form. And that seems unlikely: his shot conversion rate is 50%, up from 30% last season.

Since his #PL debut, Pierre-Emerick Aubameyang has been involved in 46 goals in the competition (37 goals, 9 assists)

Only Mo Salah (53) has had a hand in more in that time pic.twitter.com/ORcGL8fTgo