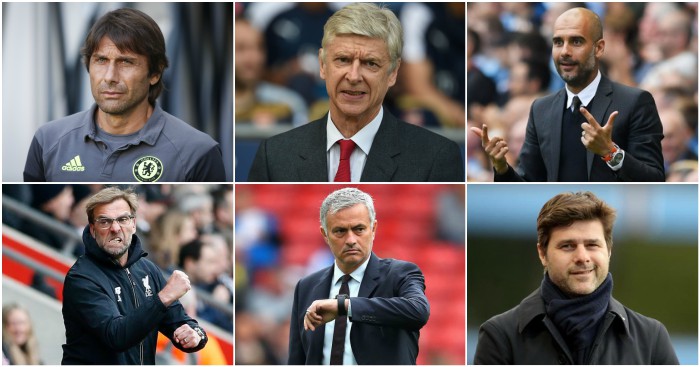 There ends the short list of clubs who have changed their manager since the start of the season, a distinct anomaly in recent years. Last season, Sunderland, Liverpool, Aston Villa, Swansea and Chelsea had all shed managers by this stage, while in 2014/15 the list read Crystal Palace, West Brom, Newcastle and Queens Park Rangers. The year before boasted a bumper crop of sackings, with Sunderland, Crystal Palace, Fulham, West Brom, Tottenham, Cardiff City and Swansea all changing their manager by early February.

In fact, you have to go back to 2012/13 to find a season in which so few Premier League clubs had made managerial changes, but even more unusual is that no club in the top 16 has made the move this season. That is almost unprecedented in any top European league over the last decade.

Yet talk of crisis, particularly among the clubs at the upper end of the table, has never been more prevalent. Each of the managers of the top six teams in the current Premier League table has been placed under severe pressure at one time between August and February.

The pattern is remarkable, with each club and manager taking their turn. Arsene Wenger was in crisis in August after losing to Liverpool and drawing against Leicester. Antonio Conte was reported to be leaving Chelsea in September, a month in which the club failed to win a league game. In October, headlines asked ‘Where has it all gone wrong?’ for Jose Mourinho and Manchester United. By November, Mauricio Pochettino’s ability to continue Tottenham’s progression was being called into question after Champions League exit, followed by December crisis for Pep Guardiola – did he deserve his glowing reputation? Enter January, and it was Jurgen Klopp who was pushed into crisis. As February begins, we’ve started again at Wenger.

This talk of crisis is not entirely manufactured, of course: Each of those managers did suffer setbacks within those months. Yet if the combination of a rise in accusations of calamity and a reduction in sackings seems illogical, the two might well be negatively correlated. Controversy sells, but so too does crisis. On Football365, we know that a 16 Conclusions piece on a draw will always attract fewer readers than a victory/defeat, and our ‘worst’ top ten lists always do better than the ‘best’ list on the same topic. Nobody needs or wants to read that ‘everything is fine’.

The absence of any actual emergency at these clubs, or the ability of managers to find form as quickly as it was lost, dictates that the ‘crisis’ bar has been lowered. So rather than a defeat being sold as a setback, it becomes a crisis. If Chelsea lose to Burnley this weekend, people will publicly question whether they are choking on the home straight.

Certain sections of the media have been buoyed in this strategy by the rise in football supporter fundamentalism, where once unheard supporters have been placed front and centre of stories. There is disagreement over the state of football journalism, but almost all can agree that ‘Twitter reacts’ stories represent the scrapings from the bottom of the barrel. Supporters with extreme – or should that read extremely negative – views are cherished as an easy sell.

The perfect example of this is Klopp and Liverpool. “I know what will happen if we end up losing a fourth game in a row,” the German said before Liverpool drew with Chelsea. “Am I allowed to go for the best position in the Premier League? Or should we just put our heads down and say, ‘OK, sorry, we failed again. Let’s get through the season and next year try again with different players and, if someone asks for it, a new manager’?” Those quotes were headlined in one tabloid as ‘Jurgen Klopp believes he could face the sack if Liverpool lose to Chelsea at Anfield’.

A dose of reality, then. The most consecutive defeats any member of the top six has suffered this season is two, a record shared by runaway leaders Chelsea, Manchester City, Arsenal and Manchester United. Every team in the top six has a better record than at this stage last season: Manchester City and Arsenal have two more points, Manchester United and Tottenham five more, Liverpool 12 more. Chelsea have nine more points than they achieved in the whole of last season. Why would any of these clubs be in crisis?

Away from the gnashed teeth and shouted cries of the extremists, the reality is that most supporters are content with their lot. Manchester United fans are aware that their side should be higher up the league, but happy to give Mourinho a free pass to address the issues with squad strength and style under David Moyes and Louis van Gaal, Manchester City fans know that the rebuild under Guardiola will take time, Tottenham fans won’t allow a meek Champions League exit to change their gratitude towards and faith in Pochettino and Liverpool fans understand that Klopp’s squad contains weaknesses, is improving and are aware that the German still hasn’t had a full league season in charge. Talk of relevant concerns is fine, talk of catastrophe is not.

Importantly, all reason that they couldn’t be confident of anyone available doing a better job. For the most part, the flaws lie with the clubs as much as the managers. Three of the big six have new high-profile, elite managers and two of the exceptions have people in charge who are adored by supporters and have bought into the culture of the club. Why would going four matches without a win put all that in jeopardy?

The anomaly is Arsenal supporters, for whom the cloud of Wenger’s exit is casting shadows across the club’s progress. Yet Gary Neville was right to criticise the fan who had brought his ‘Enough is enough’ banner in anticipation of defeat. That banner does not represent the majority, who may be urging Wenger to leave but wish him a dignified exit and will thank him profusely for his excellent and devoted service.

Outside the top six, most clubs realise that the elite clubs cannot be matched for pace and that the difference between finishing eighth and 14th is not enough to provoke a sacking. The rise in broadcasting revenue renders the financial reward for finishing two or three places higher close to negligible, and the risk of twist over stick is not worth the possible reward. New managers have new transfer plans; change can be an expensive business.

Having been told for years that patience in managers is a sadly long-lost virtue, the reality is that there is now far more around than some would wish. Each of the Premier League’s elite clubs have a manager in charge of a long-term project.

2016/17 is the season during which the cries of crisis became deafening, but not defining. For all the boys crying ‘wolf’, nobody is getting bitten.