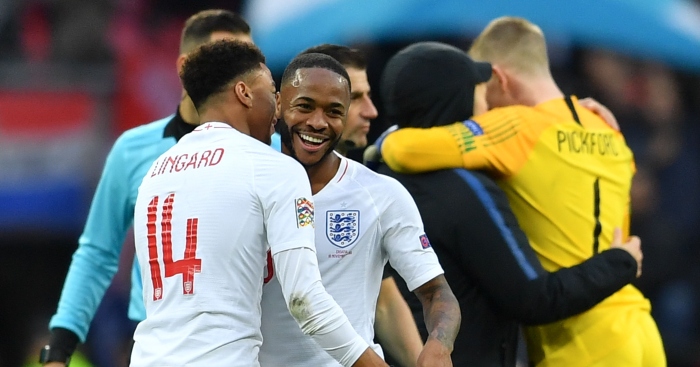 Last year was England’s great year of potential. No other country in history had ever won three age-level tournaments in the same calendar year. Despite the increase in foreign players – and a myriad other factors – threatening to stymie the careers of our most talented youngsters, talent had shone through. England had won the Under-17 World Cup, the Under-20 World Cup and the Under-19 European Championship. The long-term strategy was that, with the right treatment, the Football Association’s grand plan to develop footballers with high technical ability could come to fruition.

If 2017 stood for potential, 2018 has represented hope. England’s World Cup performance provided the soundtrack to the sporting summer. Ignore the ‘buts’ of those determined to spoil your fun. For a while in Russia, even the grumpiest observer began to believe. Do not underestimate how many psychological walls were broken down in June and July. It’s coming home, the anthem that became a cultural movement, was never about glory but joy sourced from hope. Think back to that penalty shootout against Colombia, and you’ve already understood it.

In this context, what happened post-Russia was almost as important as the World Cup itself. As Gareth Southgate said so firmly after England’s exit to Croatia, those four weeks were never intended to be taken in isolation but as part of a wider journey. There’s no doubt that England’s unexpected performance in Russia put Southgate on a pedestal from which he could easily topple and fall. Build them up to knock them down – it is the British sporting mantra.

Qualification for next summer’s finals may not seem groundbreaking. A competition gains kudos through tradition and history, and the Nations League is still in its infancy. But do not fall into the trap of believing that Spain and Croatia did not care, thus diminishing England’s achievement. If nothing else, this is proof that the goodwill and belief earned in Russia were not merely ethereal, abstract notions but a tangible fuel for further success.

On Sunday, England were trailing Croatia with 20 minutes to go, but won. It was the first time that England have trailed after 70 minutes of a competitive match and been victorious since beating Cameroon at Italia ‘90. Wembley was nervous, resigned to its fate, and so were most of us.

But this team does not know when it is beaten. It does not panic, it does not lose its head. It believes in itself and the players believe in each other. It dreams big. Before Sunday’s game, Dele Alli said the aim is to be considered as the No. 1 team in the world.

This is also a team which has a great deal of fun, which may sound like a twee aside but is actually a crucial element of their progression. For decades, players who performed excellently for their clubs slogged and stumbled their way through international breaks; they became a chore rather than honour. After the final whistle against Croatia, England players danced with each other and embraced those streaming off the bench with smiles usually reserved for long-lost friends. Never underestimate the power of fun.

Look at the age of Sunday’s team and try to stay glum. Twelve of the 14 players used are aged between 18 and 25, and five are aged 22 or under. Luke Shaw, Trent Alexander-Arnold, Ruben Loftus-Cheek, Harry Winks, James Maddison, Mason Mount, Phil Foden, Reiss Nelson, Ryan Sessegnon; none were involved and all are aged between 18 and 23. There will be more too. Young English players are becoming impossible to ignore.

We must take a moment to praise Southgate, in whom few were initially confident and fewer still believed could take England on this journey. If Southgate looked like a substitute geography teacher thrust into the role due to a lack of decent alternatives, he has inspired his students to learn about oxbow lakes and tectonic plates. His rise from ‘really?’ to ‘really!’ has been extraordinary. Understated, hard-working and principled, Southgate is the embodiment of this project.

It is impossible not to place England’s improvement in a wider context, however much that will make some readers groan. Football is our escape, our flight from the travails of the things that matter an awful lot more but which we often feel equally helpless to control. England have offered meaningful distraction when it was most needed. Even subconsciously, that is why 2018 has felt so special.

After all, this is all we ever wanted. No reasonable England supporter expected a team that consistently challenged for major honours; that would be greedy. But we did dream of a team which we could believe in, a team moving in the right direction and a team in which we could have immense pride. All three of those boxes were ticked during the final minutes of the final match of 2018, England’s year of hope.