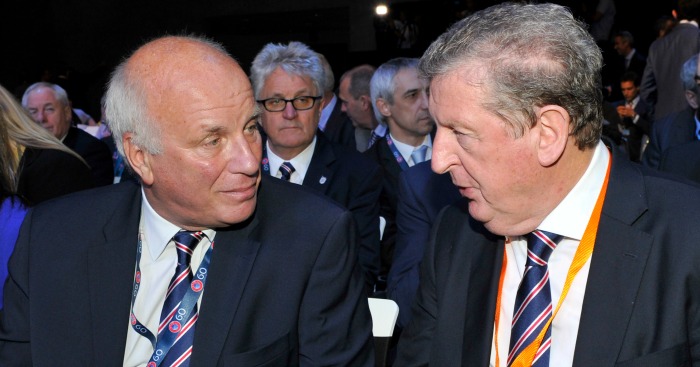 The world game’s governing body launched a new era on Friday when Gianni Infantino was elected as Blatter’s successor.

England had campaigned to stage the 2018 finals, which were ultimately awarded to Russia as part of the process which also saw Qatar surprisingly selected as hosts four years later, one which has since been the subject of intense debate.

However, Dyke has hinted that the removal of Blatter’s regime could see the nation chance its arm once again.

Speaking on BBC Radio 5 Live’s Sportsweek show, he said: “We haven’t bid for any FIFA tournaments of late, largely because we didn’t trust the system following the bids of 2018 and 2022.

“That was a decision we took, but it was also a decision that the Government made it very clear they didn’t want us to bid while Mr Blatter was there. Now he’s gone, if we think it’s a fair system and England wants to bid for men’s, for women’s etcetera, then we should just go ahead and bid.

“That wasn’t our principal reason for supporting change, but I do think if the opportunity comes, we should bid for it, yes.”

Asked if 2030 was a possibility, Dyke added: “There are a couple of men’s tournaments coming up around that time, which are the Euros in 2028 and the World Cup in 2030 and I don’t suppose you could have both, so we will have to make a decision which we wish to bid for and what are our chances.

“As long as it’s being done openly and fairly – unlike what happened last time – then we as a country should decide whether or not we want to go for it.”

The FA supported UEFA general secretary Infantino in his bid for the FIFA presidency with Dyke describing the Swiss as “straight”.

He is now hoping the new man can lead the organisation out of the scandal in which it has become engulfed, although he admits the process could take years.

Dyke said: “This is a chance, this isn’t the end of the whole affair. The investigations are going to go on for years, but hopefully they are investigations into the past.

“Hopefully a new leader plus a reform programme can actually make it tougher to see the sort of antics we have seen in recent years.”

In particular, Dyke wants to see greater transparency with the federation’s finances to eradicate the kind of situation which saw Blatter sanction a 5million Euros loan, which was later to written off, to the Football Association of Ireland in a bid to head off legal action over Thierry Henry’s infamous World Cup play-off handball.

He said: “If you have got someone like Gianni, you have got more chance of that being done properly – it’s certainly done properly in UEFA – so that you know where the money is being spent because we all want more money to go to countries around the world where you need money to develop football, and some countries need it more than others.

“But what you want to make sure is the money is being spent properly and isn’t being used for some of the things we have seen in recent years.

“You have got to have a different group of professionals making sure where the money is going, that you can’t, as Mr Blatter did, walk into a meeting with the Irish and just give them 5million Euros because they were upset.

“You can’t do that – and that nobody ever accounted for it. You can’t have a situation where suddenly Mr [former UEFA president Michel] Platini paid money that nobody knows what it’s owed for and it’s not in the books. There has got to be proper accounting.”