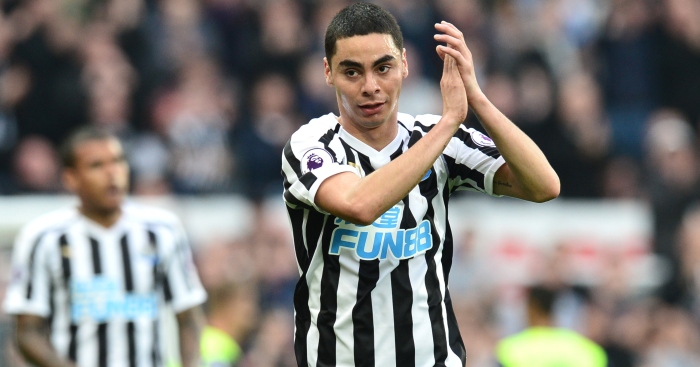 Newcastle schemer Miguel Almiron is facing a race against time to be fit for this summer’s Copa America after being ruled out for the rest of the season with a hamstring injury.

The 25-year-old Paraguay international left the pitch in tears during the second half of Saturday evening’s 3-1 Premier League victory over Southampton, suggesting the extent of the damage was significant, and the Magpies confirmed he will not figure in the final three games of the campaign on Wednesday morning.

A statement issued on the club’s official website, www.nufc.co.uk, said: “Miguel Almiron will miss the rest of the season after suffering a hamstring injury in Saturday’s 3-1 win over Southampton.

“The 25-year-old was withdrawn in the 64th minute against the Saints and, having been assessed by the club’s medical staff, it has been confirmed that he will not be fit for the Magpies’ final three matches of the campaign.

“The club have already been in communication with – and will continue to liaise with – the Paraguayan Football Association ahead of this summer’s Copa America, which the player could still feature in depending on his recovery.”

The Copa America gets under way in Brazil on June 14, with Paraguay opening their campaign against Qatar in Rio two days later.

Almiron has made a good impression since completing his club record £21million switch to St James’ Park in January.

Although he is yet to score, he has injected pace and a direct approach into Newcastle’s play to justify manager Rafael Benitez’s faith in him.

In the process, he has helped the Magpies to secure their top-flight status for a third season, a process which was completed a day after their win over the Saints when Cardiff lost to title-chasing Liverpool.

He will miss Saturday’s trip to Brighton before the last home game of the season against Jurgen Klopp’s Reds and the final day fixture at relegated Fulham.