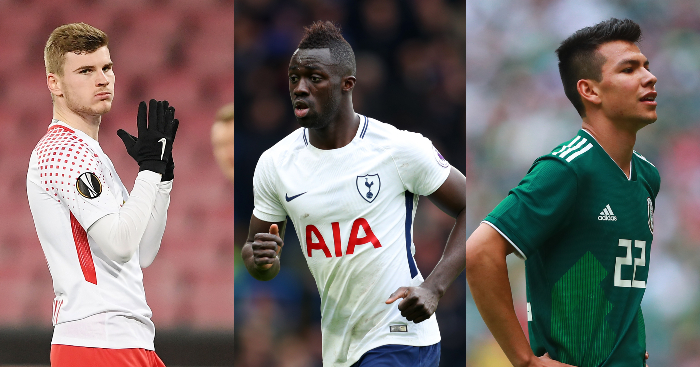 EGYPT – Trezeguet
Nicknamed after the French striker due to an apparent likeness – which takes a leap of faith – Mahmoud Hasan has actually already earned 23 caps for Egypt. But the Kasimpasa midfielder is now pushing for a starting place in Hector Cuper’s side. He’s been linked with a move to Leicester City to replace Riyad Mahrez.

URUGUAY – Rodrigo Bentancur
Joined Juventus from Boca Juniors in 2017, which unsurprisingly also saw him established within Uruguay’s first team. Still only had six caps, but likely to start every group stage game and can basically do any job required in midfield. This kid could be the business.

RUSSIA – Anton Miranchuk
Alexander Golovin is the next Russian star to move to western Europe, but only eight players in Russia’s squad have more caps so he misses out. Miranchuk only made his Lokomotiv Moscow first-team debut in April 2017, but was fast-tracked into the senior international set-up and made his debut only five months later.

SAUDI ARABIA – Abdullah Al-Khaibari
The youngest player in Saudi Arabia’s squad, Al-Khaibari missed out on the sponsored trip to La Liga at the end of last season, which is probably a good thing. Probably won’t start, but a potential game-changer from the bench.

SPAIN – Álvaro Odriozola
The most notable aspect of Julen Loptegui’s time in charge of Spain is his willingness to give chances to unfamiliar players, particularly those who progressed through his Under-21 squad. Odriozola was Dani Carvajal’s back-up, and it was his Champions League final injury that gave the youngster a chance to impress against Switzerland. He only went and scored the opening goal.

PORTUGAL – Gonçalo Guedes
Portugal’s Euro 2016 young stars have almost as one failed to kick on, with Renato Sanches the poster boy for that decline. The same looked to be true of Guedes, who joined Paris Saint-Germain in January 2017 for a fee of close to £30m and then barely got a game. He then signed on loan for Valencia last summer, and promptly demonstrated why PSG was so keen. Made his senior international debut in 2015, but he still has only nine caps and is still only 21.

MOROCCO – Achraf Hakimi
Hakim Ziyech is Morocco’s best player, but he’s got 17 caps and is now 25, so does not qualify. Hakimi has been at Real Madrid since the age of eight and finally progressed to the first-team squad this season. Played nine times in La Liga, twice in the Champions League and made his senior international debut last October. Doesn’t turn 20 until November.

IRAN – Saman Ghoddos
Only seven caps by the age of 24, but Ghoddos gained notoriety this season after providing both assists in Ostersunds’ 2-1 second leg victory over Arsenal in the Europa League. Want another fun Saman Ghoddos fact? He’s also scored a senior international goal for Sweden. Let’s face it, he is unlikely to face them in this tournament.

FRANCE – Corentin Tolisso
Unlikely to start the tournament having made his competitive debut in October, but there are noises – and those noises are boos – that Paul Pogba could be left out of the starting XI and Tolisso start in Russia. The only one of France’s last eight games that they lost was the one Tolisso didn’t play.

DENMARK – Kasper Dolberg
Ajax’s next big thing has scored 22 Eredivisie goals in two seasons despite still being just 20, but has yet to break out on the international scene. Made his debut back in November 2016 but still only has five caps and a single goal. That should change in the next fortnight. He’s better than Nicklas Bendtner, for goodness sake.

PERU – Miguel Araujo
South America is producing some bloody good young central defenders, and Araujo is the cream of Peru’s crop. Linked with a move to Europe at the end of this tournament, he is likely to start in central defence in Russia having marked Lionel Messi out of a qualifier in Buenos Aires in October 2017.

AUSTRALIA – Daniel Arzani
The youngest player at the World Cup also has a belting first name. Born in Iran, Arzani was named in the A-League Team of the Season after bursting onto the scene for Melbourne City. Expect him to be sold to Manchester City and then immediately loaned to Girona.

ARGENTINA – Cristian Pavon
Will not start given the attacking options Jorge Sampaoli has at his disposal, but with Manuel Lanzini and Angel di Maria both preferring to drift infield, Pavon offers something that no other player in Argentina’s squad can: Natural width in attacking areas.

CROATIA – Duje Caleta-Car
Might not start in Russia, but Caleta-Car has made himself a fixture in the Red Bull Salzburg team that reached the Europa League semi-final this season. Could be the subject of transfer rumours linking him to the Premier League this summer. Southampton, Newcastle or Everton are our best guesses.

NIGERIA – Tyronne Ebuehi
Only 22, Ebuehi would have completely avoided my radar had he not joined Benfica on a five-year deal last month having impressed in the Eredivisie with ADO Den Haag. Introduced at half-time against England last week, the right-back was one of the reasons that game turned on its head. Another reason was that England went shite.

ICELAND – Albert Guðmundsson
Very few options here, so Gudmundsson sticks out like a goalscoring thumb. Scored a hat-trick against Indonesia as a substitute and will hope to push his way into PSV’s first-team plans next season. Albert’s great-grandfather was former Milan and Arsenal striker and later Minister of Finance Albert Guðmundsson, Iceland’s first professional footballer and Arsenal’s second foreign player. Find yourself someone who is impressed by that last sentence, and marry them.

BRAZIL – Fred
Difficult pick, this. Brazil have four outfield players in their squad with fewer than ten international caps. One of those is 32 (Pedro Geromel), one is 29 (Fagner) and another is 30 (Taison). That leaves a 25-year-old who has been in the news once or twice recently for joining Manchester United for £52m and will be Jose Mourinho’s catalyst. Fred has eight caps, and could be the surprise star of this World Cup if he can force his way past Paulinho or Casemiro. Good luck, fella.

SWITZERLAND – Manuel Akanji
This isn’t a campaign against Johan Djourou, but there must be a way that the team ranked sixth in the world can avoid picking him as their central defender. That ‘way’ might be Akanji, who joined Borussia Dortmund from Basel in January for just north of £15m. He started against Spain last week, which is a good start.

SERBIA – Sergej Milinković-Savić
A phenomenal talent and one of the standout stars in Serie A, and yet not a certain starter for Serbia. If that sounds a bit mad, it’s worth remembering that Serbia have typically produced battling, physical, ugly sides and are slightly unnerved by an attacking midfielder that demands an attack being built around him. Still to play a competitive game for his country, but boy do we hope that changes in Russia.

COSTA RICA – Ian Smith
He’s one of only two players under the age of 25 in the squad, so pickings are slim. But he was born in Costa Rica, plays in Sweden and is called Ian Smith. Lovely.

GERMANY – Timo Werner
He’s already scored seven international goals, but Werner could be the breakout star of the entire tournament. This is Germany’s first World Cup since 1998 without Miroslav Klose, but in Werner, Jogi Loew may have finally found his replacement. Werner will start in Russia, allowing Thomas Muller to deut the raum around him. Given Germany’s likely route to the quarter-finals, either of the two looks a good bet for the Golden Boot.

MEXICO – Hirving Lozano
Sarah Winterburn is president of the Edson Alvarez fan club, but I’m ignoring Mexico’s right-back in favour of Lozano, who could genuinely be a contender for the Best Young Player award. He’s been magnificent at PSV, and while he does strictly have too many caps to be considered here, only three players in the squad have fewer and Lozano is still only 22.

SOUTH KOREA – Lee Seung-woo
Wrote the majestic Winterburn, S in her No 10s feature: ‘He is only 20 and he marked his South Korean debut with an assist against Honduras just last month. Recently relegated with Hellas Verona but Barcelona have a buy-back clause that they may well exercise this summer if he excels in Russia.’ That’ll do for me.

BELGIUM – N/A
It sounds like a cop out, but nobody likely to start for Belgium in Russia has fewer than 20 caps. Youri Tielemans and Leander Dendoncker were options and Adnan Januzaj a surprising selection for the squad, but it would be odd if any got more than a smattering of minutes. Sorry, but the problem with having a Golden Generation is that we know them all already.

ENGLAND – Jordan Pickford
I’ll get told off for not picking Trent Alexander-Arnold, but I just don’t see him getting enough minutes. Pickford, meanwhile, looks to have the No. 1 spot sewn up despite only having three caps. Play well this summer and he can keep it for the next six or seven years at least.

TUNISIA – Ellyes Skhiri
Only committed to Tunisia earlier this year and therefore has just three caps, Skhiri is likely to play as a defensive midfielder in Russia but might not necessarily start. But could he impress when he does? Ellyes!

PANAMA – Michael Amir Murillo
Is already being linked with a move to Europe even before the World Cup begins, thanks to impressive displays in MLS and the CONCACAF Champions League. Murillo has 21 caps, but is still just 22 years old. In an ageing squad, that youth is appreciated.

COLOMBIA – Davinson Sanchez
Already a Premier League star after an excellent debut season in England, Sanchez is still to fully make the grade at international level. Has nine caps, but is likely to be trusted by Jose Pekerman to form a central defensive partnership with Yerry Mina. There won’t be many younger pairings than Sanchez (22) and Mina (23).

SENEGAL – Ismaila Sarr
Keita Balde is just too experienced to get the nod, but Sarr could be Senegal’s suber-sub in Russia. He’s already getting admiring glances from outside France after impressing at Rennes alongside international teammates Diafra Sakho and Abdoulaye Diallo having reportedly turned down an approach from Barcelona. Only turned 20 in February, so potentially quite a talent.

POLAND – Dawid Kownacki
Is never going to start given the presence of Robert Lewandowski and Arkadiusz Milik, but Kownacki moved to Sampdoria last summer from Lech Poznan and is highly rated in Italy. Won his first league title in Poland and inevitably struggled under the weight of the ‘new Lewandowski’ tag, but is a possible game changer from the bench. Has played almost 150 senior career games despite only turning 21 in March.

JAPAN – Naomichi Ueda
Both the youngest player in Japan’s squad and the player with the least number of caps, Ueda is a European-style central defender (pacy, powerful, good in the air) of whom Japan expects big things. Still playing in his home country, a successful tournament might accelerate a move to Europe. A successful tournament might just be avoiding finishing bottom of Group H.