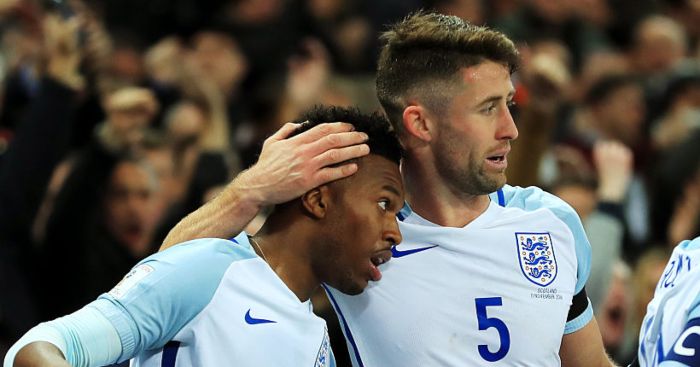 GOALKEEPER: Rob Green
Scoff all you bloody want (and point out that he’s now happily retired), but Rob Green called time on a 20-year playing career by lifting a major European trophy at a club he literally never played a single game for. Maurizio Sarri’s back-room team might have been ‘bemused’ when a 38-year-old reserve keeper rocked up from Huddersfield last summer, but Green leaves with his first major honour since the 2004 First Division.

His last England appearance was so long ago he was playing for QPR in the Premier League at the time. Rather mercifully, Roy Hodgson started the keeper in a pre-Euro 2012 friendly against Norway to ensure that the opening group game of the 2010 World Cup was not his final international memory.

RIGHT BACK: Micah Richards
The absolute antithesis of safety-first, helmet-wearing, sex-with-the-socks-on Gary Neville, Micah Richards was the exciting full-back of the future. A year after rejecting a £5m offer from Tottenham for the defender, then-Manchester City manager Stuart Pearce spoke of his desire to see Richards “stay here, captain the club, and maybe be here for 10 years and carry the club on his back if he can”. Richards did indeed stay for ten years from his first-team debut in 2005, but left after playing just nine times in the Premier League from 2012 to 2015.

A loan spell with Fiorentina was followed by a move to Aston Villa, relegation under Tim Sherwood and Remi Garde, and not a single game of first-team football since October 2016. A man once touted for the England captaincy made his last international appearance under Fabio Capello.

CENTRE-BACK: Gary Cahill
Among the many crimes third-placed Europa League champion Maurizio Sarri committed during his first season at Chelsea, deeming 33-year-old Gary Cahill not of the requisite standard was easily the most heinous. The captain was limited to a measly 22 Premier League minutes, playing with slightly more regularity in the Europa League and League Cup. He should perhaps have taken up Juventus on their reported interest in January. He perhaps should not have tried his best to rock the boat before the final of the former.

His semi-retirement post-World Cup still stands. “I think it’s time that I take a step back now. It’s the right moment to do that. At the same time, in your football career you never want to shut a door completely, I’ve been hugely honoured to play for my country and if I’m ever needed, I’m there,” he said in August. Derby and Aston Villa have both been linked with a player whose last England game was that group-stage rubber defeat to Belgium.

CENTRE-BACK: Phil Jagielka
While Everton have offered fellow fossil Leighton Baines a new contract, the same courtesy has not been afforded to Phil Jagielka. The club captain will leave after 12 years, one FA Cup final, a sensational Merseyside derby volley and plenty of lessons for Rio Ferdinand and Nemanja Vidic. Stoke want him; Sheffield United are not slaves to romance or narratives.

The centre-half stayed long enough to become Everton’s most-capped England player, making his 40th and final appearance as a second-half substitute against Spain in November 2016. It was the final game of Gareth Southgate’s interim reign. Aaron Cresswell and Andros Townsend also played.

LEFT-BACK: Ashley Cole
Has enough time passed to show Ashley Cole some love? It is a question worth asking again as his career edges towards an ignominious end. The left-back played the full 90 minutes of Derby’s Championship play-off final defeat to Aston Villa last month but, with the Rams failing to offer him a new contract, he is likely to retire this summer.

If not, there is a three-time Premier League winner with as many FA Cups as Liverpool, a Champions League, a Europa League and over 100 England caps on the market. Speaking of which, Roy Hodgson should probably have taken him to Brazil five years ago.

CENTRAL MIDFIELD: Jack Rodwell
“I’ve obviously had a bit of time off, but I can’t wait to get going again,” was Jack Rodwell’s way of describing his 104 league minutes during Sunderland’s 2017/18 season, after which his £43,000-a-week contract was cancelled. He had been at the Stadium of Light for so long that Gus Poyet was the one who bloody signed him.

The midfielder would soon end up at Blackburn, “a club which has won the Premier League before and it doesn’t get bigger or better than that”, clearly lured by their success of 23 years before. Having rebuilt his reputation to the extent that he can afford to delay accepting a new contract offer due to Serie A interest, he might as well book his places on the various planes to Euro 2020. Kyle Walker, John Stones, Fabian Delph and Raheem Sterling are the only current England squad members with a Premier League winner’s medal to compare to Rodwell’s.

CENTRAL MIDFIELD: Gareth Barry
Does he still have nightmares about 2010-era Mesut Ozil? Was stealing a taxi on a mid-season break to Spain merely a cry for help? Is the fact that he was dropped for West Brom’s last 13 Championship games, his final match for the club ending after 63 minutes of a 4-0 defeat to Leeds, a sign that 38 might be too old to regularly hold a midfield together?

“One of the best English players ever” was open to extending his Hawthorns stay this summer, but found himself in the same boat as 2007 Brit Award winner for Best British Male James Morrison in being shown the door. He will surely head into management soon to give Steven Gerrard and Frank Lampard the licence to roam.

TREQUARTISTA: Stewart Downing
While Jordan Henderson was lifting the Champions League trophy, the rest of Liverpool’s summer 2011 arrivals were left to wonder what would literally never have been if they had stayed. Doni and Jose Enrique have retired, Sebastian Coates is plying his trade in Portugal, Craig Bellamy is making his mark in coaching and Charlie Adam and Stewart Downing were both released this summer. While Scotland beckons for the former, the latter seems predictably Sunderland-bound.

While England were thrashing Spain in their own backyard four months after the World Cup last year, Downing was starting as the attacking midfielder behind Wayne Rooney five months after England collapsed in Brazil in 2014. Top marks to those who remember that his last cap came with West Ham.

RIGHT WINGER: Daniel Sturridge
It is ostensibly a no-brainer. A Premier League winner and two-time European champion, former Team of the Year member and boaster of a solid record of 50 goals in 116 league games for Liverpool: Daniel Sturridge is still only 29 and should be one of the world’s most sought-after free agents.

But those bloody injuries. Tottenham were linked in February, a move to America was touted in January and a litany of other clubs have shown an interest, yet his physical frailties form a question mark that lingers over his head. The talent is quite obviously there – he is one of 46 players to net a World Cup goal for England, and scored more Premier League goals in 2013/14 (21) than Jesse Lingard in his entire career (17). Let’s just hope to see those wavy arms again soon.

CENTRE-FORWARD: Andy Carroll
Farewell, sweet prince. It turns out that starting 62 of a possible 228 Premier League games (27.2%) from August 2013 to May 2019 doth not a reliable, consistent striker make. He might be tired of “the sh*t I get”, but Andy Carroll leaves West Ham with 34 goals, one hat-trick against Arsenal and a single England cap, earned two months after he joined on loan from Liverpool.

Come back to us in a year’s time when a corner of talkSPORT is telling us that he “would offer something different” to England’s Euro 2020 side, mind.

LEFT WINGER: Danny Welbeck
What a f***ing boy. And what a legitimately impressive signing it would be. He is still just 28, has more than a decade of first-team experience to his name at Manchester United and Arsenal, and would cost the square root of sod all. Someone make it happen.