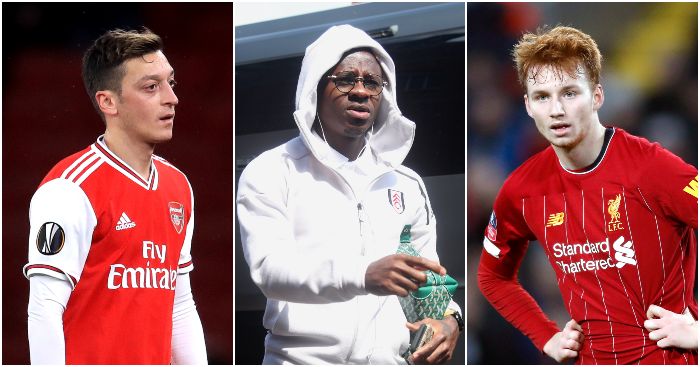 Premier League clubs will soon be able to name nine on their bench. Which means some of these will surely get a chance. Maybe. Except those who have not been named in Premier League squads of course.

Arsenal
Mesut Ozil – Not sure if you heard, but Mesut Ozil was left out of Mikel Arteta’s Premier League and Europa League squads. Some people think that was a pretty bad idea.

Pablo Mari – We genuinely forgot he existed until he appeared in the Europa League.

Calum Chambers – Arsenal have a lot of centre-halves (though he played at right-back last week v Dundalk).

Folarin Balogun – Not a centre-half but that should mean Mikel Arteta gives him at least a place on a nine-man bench.

Arsenal should not fold on Arteta in this weird season…

Aston Villa
Henri Lansbury – The 30-year-old started all three of Villa’s Carabao Cup matches but having been left out of the Premier League squad, he’s no hope of any action now before January.

Tom Heaton – Fit again so could be parachuted back into Villa’s Premier League squad in January. Poor Jed Steer.

Lovre Kalinic – The man who will surely be bumped from the squad to make a space for Heaton.

Jose Izquierdo – “Could I see him coming on and affecting games in the last 15-20 minutes if there’s a need because the space has opened up and the tempo or intensity isn’t so high?” asked Graham Potter. Apparently not, Graham.

Max Sanders – The highly-rated academy graduate impressed in the Carabao Cup, just not enough yet to earn a spot on Graham Potter’s bench. Sanders, a 21-year-old midfielder, will probably go out on loan again in January after a spell at AFC Wimbledon last season.

Burnley
Richard Nartey – Defender signed for Burnley in November after being released by Chelsea in the summer. A loan spell at Burton toughened him up for the challenge.

Chelsea
Danny Drinkwater – Spent this week kicking a 16-year-old up in the air.

Crystal Palace
Nothing to see here as Conor Wickham and Nathan Ferguson have both been injured.

Everton
Yannick Bolasie – Left out of Everton’s Premier League squad and saw a Middlesbrough loan move collapse, which means his only action now comes for DR Congo. Boro may yet rescue him in January.

One per club: Players eyeing up January sales

Fulham
Fabri – The Spanish keeper was linked with a move to Turkey in the summer but he’s still getting under Scott Parker’s feet at Craven Cottage.

Leeds United
Ouasim Bouy – The 27-year-old, once likened to Paul Pogba by Mino Raiola, has become the forgotten man at Leeds. Though for most of us, it’s hard to forget someone you never knew existed.

Leicester City
Eldin Jakupovic – Third-choice keeper. We are still baffled about why he joined.

Demarai Gray – “It’s pretty clear with Demarai that he’s looking to move on,” said Rodgers recently of a winger who is out of contract next summer. Despite naming him in his 25-man Premier League squad, Rodgers has turned his back.

Admiral Muskwe – He’s a 22-year-old Zimbabwe international striker and he has scored in his last three Under-23 games.

Liverpool
Sepp van den Berg – Under normal circumstances, 18-year-old Van den Berg’s omission wouldn’t make any waves. But the fact Liverpool have almost exhausted their supply of centre-backs yet the £4.4million signing seems further than ever from the first team must be a little worrying for the Dutchman.

It has to be said that Sepp Van den Berg has been quality this season, cut out the silly mistakes from last season and looks confident both on and off the ball 🇳🇱

Manchester United
Sergio Romero – Dropped from all the squads because who needs a man with 96 caps for Argentina?

Facundo Pellestri – He was promised first-team football and is fulfilling his part of the deal with goals in his last two Under-23 appearances.

Solskjær: “We felt Facundo [Pellistri] would benefit [from youth football]. He started training with the first-team – he did well but we couldn’t give him game-time so we thought we’d give him a run of games in the 23s and he’s benefited from that.” #mulive [men]

Newcastle United
Henri Saivet – The Magpies could not shift arguably one of the their biggest recent flops in the summer nor tempt anyone into paying even a portion of his £35,000-a-week salary on a loan basis. So he waits at St James’ Park for his contract to run down at the end of the season.

Christian Atsu – The former Chelsea winger did at least play ten minutes in the Carabao Cup this season.

Achraf Lazaar – “I don’t know what will happen in January, if maybe I will go to Italy or elsewhere,” says the Moroccan international who has played ten matches for the Magpies in over four seasons at the club.

Rolando Aarons – A loan move to Huddersfield fell through after the paperwork was filed a couple of minutes too late. So the 24-year-old will have to wait for another opportunity in January to fly the Magpies nest.

Sheffield United
Jack Rodwell – The Blades are terrible but the former England international still cannot get a sniff.

Jayden Bogle – “I want my experienced players to play. That’s not to say we haven’t got faith in Jayden and if George got injured, or I decided he wasn’t doing enough, then he’d go in,” says Chris Wilder of his right-back summer signing.

Southampton
Harry Lewis – All his hopes rest on Fraser Forster buggering off to Celtic again.

Tottenham
Danny Rose – The former England defender hasn’t been allocated a squad number and he continues to be linked with a return to Leeds.

Alfie Whiteman – Tottenham have a lot of goalkeepers.

Brandon Austin – A lot of goalkeepers.

Jack Clarke – Last year’s £10million signing has finally made his Spurs debut in the Europa League.

Japhet Tanganga – Back from injury to play in the Europa League but the Premier League bench eludes him.

Harvey White – A regular on the Europa League bench but the central midfielder is way down the first-team pecking order.

West Ham
David Martin – Remember when he was very briefly a Hammers hero?

Wolves
Roderick Miranda – We are beginning to suspect that he only exists on these pages. Poor Roderick.