Liverpool lost 7-2 but let's not talk about that when we can pretend they will sign Ousmane Dembele. 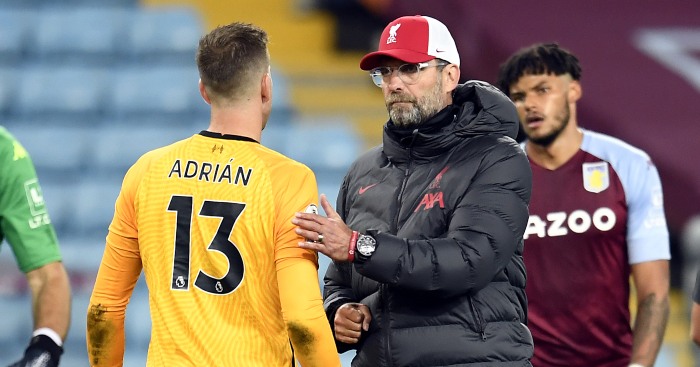 A week is a long time in football

‘Even during this crazy, goal-drenched, controversy-ridden, fan-free start to the Premier League season, Liverpool winning is as inevitable as death and taxes.

‘The rest of them might as well start dishing out guards of honour to Jurgen Klopp’s men. It promises to be another procession.’

Can Villa please do a job on death and taxes too.

Those wondering how the Liverpool propagandists might spin this should wonder no longer; it’s all about distraction.

Hundreds of words later, it turns out they ‘could’ but they probably won’t…

‘So will Liverpool make any deadline day moves? It’s unlikely.’

And why not? Well, because ‘Klopp’s starting XI is so settled, so strong, that only major big-money additions can improve it’.

Indeed. How could you possibly improve a starting XI that has just lost 7-2 to Aston Villa?

Elsewhere on the same website we are told that ‘without sticking the knife in too hard, it was another wildly erratic performance from Joe Gomez who toiled to such an extent that it became difficult to watch before Klopp hooked him off on the hour-mark. We know he’s a phenomenal defender on his day – he literally showed it with an outstanding display against Arsenal on Monday night – but he’ll be well aware he was miles below the required standard here.’

And yet there is literally no way to improve upon him.

Oh and ‘Champions League schedule could set Liverpool up for title fall, but Jürgen Klopp will be prepared’, apparently.

Liverpool could set themselves up for a title fail if they play that sh*te again, fellas.

But it turns out that ‘there’s a strong case that the Reds should try their utmost to qualify for the Champions League knock-out stages as soon as possible to avoid a tricky end to 2020 and maintain their momentum in the Premier League’.

Over at the Liverpool Echo, they are not pulling any punches, with Ian Doyle calling the performance ‘Embarrassing. Humiliating. Inept. Witless. Weak. Woeful’.

But the headline news on this Monday morning?

Because of course, highly unlikely transfers are definitely more important than getting battered 7-2 by Villa.

And we are then told that ‘Liverpool linked with Paulo Gazzaniga and Ousmane Dembele plus Xherdan Shaqiri and Marko Grujic latest’.

And then…? Nothing. No Dembele news at all. Not one mention of Dembele in the blog prior to the publication of this Mediawatch at 12pm on Monday.

Further investigation reveals that this headline – written on the Monday after a Sunday humiliation – actually refers to a story from Friday in SPORT in which it is said that ‘Dembélé’s intention was to stay at Barça, try to convince Koeman and get a place in the team. However, Ronald does not consider the French necessary and has decided to listen to the offers that come to him from the Premier League, and which are from teams of the Manchester United and Liverpool entity.’

And that, ladies and gentlemen, is ‘Liverpool transfer news LIVE’. Are you distracted?

They think it’s all over
The Echo transfer blog should really have been closed down at about 11.30 after this update:

‘Alisson Becker’s injury will not force Liverpool into the market for a deadline day move for a goalkeeper.

‘Liverpool had been linked with Paulo Gazzaniga but the ECHO understands the Reds’ business is done for the summer.’

Still, ‘Paulo Gazzaniga and Ousmane Dembele linked’ and all that. It could happen.

Over at the Mirror website, they are not daft.

‘Eight Liverpool deals that could happen on transfer deadline day’

That’s an awful lot for a club whose business is probably done for the summer.

The first is obviously Ousmane Dembele though ‘it is questionable whether Liverpool need him as they have Jota, Origi and Takumi Minamota as back-up to their front three’. Indeed. Does ‘questionable’ mean ‘a right load of bollocks’ now?

So what are the other seven Liverpool deals that ‘could happen on transfer deadline day’? Well, Xherdan Shaqiri could leave. And Marko Grujic. And Harry Wilson. And Yasser Larouci. Seriously, is this where you are going? And Nat Phillips, Sepp van den Berg and Ben Woodburn…

Polden out for a hero

But this really does take the biscuit from the Mirror, always happy to hoover up the Liverpool clicks that are denied The Sun for obvious reasons. It turns out it really is an excellent day for Liverpool. Let the inimitable Jake Polden tell you why.

Whoop-de-doo. What has the man said?

That is quite the confirmation of a huge financial windfall of, erm, £4,4m due to Liverpool if he stays at Barcelona. And we know he will stay at Barcelona precisely because of those comments. And absolutely not because he has started all three La Liga games this season and has not even been remotely linked with a move away.

Neil Custis, The Sun, August 2019: ‘Harry Maguire looks like the new Rio Ferdinand… he is the defender Man Utd have been waiting for.’

Neil Custis, The Sun, October 2020: ‘Harry Maguire – who is getting worse with every appearance…the captain dare not rally the troops as he was the worst player on the pitch.’

Mediawatch particularly liked the description of Maguire in that first article: ‘Pretty quick.’

In comparison to a Custis?

It’s THAT day again, #DeadlineDay!
Join me on @talkSPORT from 10 with @Sjopinion10 and Danny Murphy! And I’ll see you later on @SkySportsNews with Harry Redknapp! pic.twitter.com/0tepckuw4n

Maybe next time you pretend to be on the phone, take it off the home screen, fella.