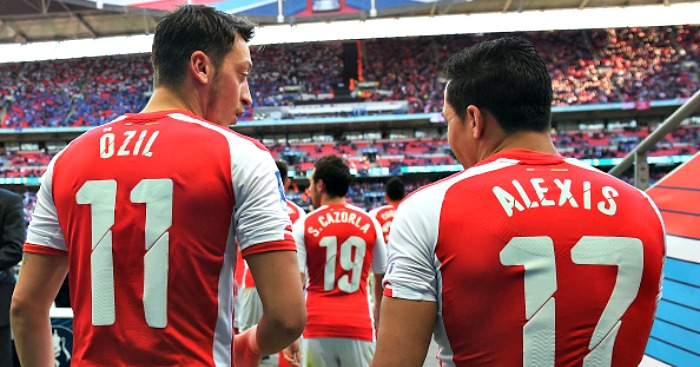 Easy guidelines: Players must be out of contract next June and there can be no option – for player or club – of an extra year. So no Ander Herrera, Juan Mata or Santi Cazorla…

Goalkeeper: Willy Caballero (Chelsea)
The Premier League has already had one ageing goalkeeper win back-to-back league titles with two different clubs, and Caballero will aim to walk in Mark Schwarzer’s footprints – win it with Chelsea (with three appearances) and then bugger off to Manchester United or Liverpool next summer for nothing and do it again. I actually quite like the idea of Chelsea having a different reserve goalkeeper every season, who rarely plays but is handsomely paid for his time sat on the bench.

Right-back: Glen Johnson (Stoke City)
Once the natural heir to Gary Neville’s England right-back throne, Johnson eventually left Liverpool after six years of treading water and may leave Stoke too next year. He will be almost 34 by then, and surely primed for a role at whichever club Harry Redknapp turns up at next.

Left-back: Kieran Gibbs (Arsenal)
Reportedly turned down a move to Watford because he wasn’t prepared to accept a significant drop in his £60,000-a-week wages, but Gibbs will have that decision taken out of his hands should he hang around at Arsenal until next June. He turns 28 next month and has managed only 104 career Premier League starts. Bleurgh.

Centre-back: Craig Dawson (West Brom)
One of, if not the, most improved Premier League player over the last two years, Dawson was reportedly close to an England call-up at the end of last season. Whether that is a factor in the delay over his new contract at The Hawthorns is unclear, but at 27 he might fancy increasing his earning potential by moving for free.

Centre-back: Ryan Shawcross (Stoke City)
Remember when Stoke City fans were put out that Shawcross hadn’t got more chances for England? He’s 29 now, and far from guaranteed a place in Stoke’s team this season following the arrival of Kurt Zouma and Bruno Martins Indi. Still, he gets a game in this squad. Lucky blighter.

Central midfielder: Emre Can (Liverpool)
Given the fever over several Arsenal key players running down their contracts, it is surprising that more has not been made of Can’s Liverpool deal ticking down. “So far there is no signing and that is the situation,” Jurgen Klopp said earlier this week “We are still in talks. Do I think it is too cool that we didn’t fix it so far? No, to be honest.” Does he fancy a move back to Germany?

Central midfielder: Ross Barkley (Everton)
Oh Ross. You refused to sign a new contract because you wanted that big move away from Everton. Then Everton dug their heels in on the asking price, the offers never came and now you’ve knacked your hamstring with a fortnight of the transfer window left. Time to cross your fingers and hope Tottenham or Chelsea come calling.

Left winger: Mesut Ozil (Arsenal)
The most recent raft of reports suggested that Ozil was prepared to sign a whacking great new contract at Arsenal after clubs didn’t quite come calling as he would like, but it remains unsigned for now. He only has to delay until January before being able to agree a free transfer move abroad.

Right winger: Alex Oxlade-Chamberlain (Arsenal)
“Yes [I want him to stay],” said Wenger on Wednesday. “I rate him highly, he is one of the players who is on his way up and has made huge progress. Personally, I want him to stay here for a long time.” With Chelsea offering £35m and a new deal still not signed, player and club have decisions to make.

Forward: Alexis Sanchez (Arsenal)
It was enjoyable to read headlines that Arsene Wenger was prepared to let Sanchez leave for free for nothing next summer. Given that he won’t sell him now and Sanchez has no intention of signing a new contract, this is hardly news. There is no other way that Sanchez can leave.

Forward: Fernando Llorente (Swansea)
There was a reason why Llorente only signed a two-year deal at Swansea City. It allowed him the option to negotiate a Bosman move back to Spain 18 months in to his stay in England. At the age of 31 when he joined, that made perfect sense. What he probably didn’t anticipate is that, at the age of 32, the Premier League champions would be trying to persuade Swansea to sell.

Michel Vorm (Tottenham)
One Tottenham player who is probably safe from the swirling vultures. The Dutchman has played 861 Premier League minutes since arriving at White Hart Lane in 2014, and will be moved on next summer. Proof as ever that Vorm is indeed temporary.

Jose Holebas (Watford)
Fourteen bookings in 33 league games last season is indicative of Holebas’, erm… tempestuous nature. But he’s also a pretty good left-back for a bottom-half Premier League team, even at the age of 33.

Fernandinho
He can play, admittedly unsuccessfully, at right-back and, at a push, in central defence. When you see the list of central midfielders to come, that will be worth its weight.

Marouane Fellaini (Manchester United)
It has only just hit me that Juventus weren’t just considering offering £22.5m for Fellaini, but that they were considering offering £22.5m for a Fellaini with ten months left on his contract. Given that they could negotiate a free transfer as early as January, that’s absolutely sodding mental. Still, Mourinho likes him so expect a new deal.

Yohan Cabaye (Crystal Palace)
There are an awful lot of central midfielders on this bench, aren’t there?

Diafra Sakho (West Ham)
‘West Ham’s Diafra Sakho would be a superb signing for Nottingham Forest,’ is the headline to an article on one of those spurious sites from July that I have just read. Well yes, but he also played in West Ham’s opening Premier League game. Sakho has scored six Premier League goals since March 2015 due to a combination of bad form and bad injuries. Still, he brings down the average age of this bench, and for that he should be congratulated.