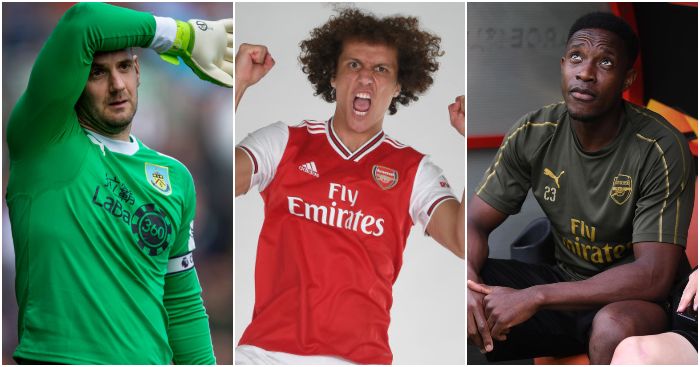 GK: Tom Heaton (Aston Villa, £8m)
While many promoted sides neglect the defence in favour of blowing their improved budget and reputation on shiny new attackers, even fewer who reach the promised land focus on upgrading their goalkeeper. The £16m Wolves eventually spent on Rui Patricio remains a record for a Championship club coming up to the Premier League, with Sunderland’s £9m outlay on Craig Gordon second. In Tom Heaton, Aston Villa claim the bronze medal. For £8m they have replaced the great Jed Steer with an excellent and proven England international who has a point to prove. Was there a bigger bargain?

RB: James Justin (Leicester, £8m)
“He’s a very exciting young player who’s had a great career down at Luton and makes the step up to the Premier League,” Brendan Rodgers said of his first Leicester signing last month. Shorn of the title-winning experience of Danny Simpson and in need of back-up for Ricardo Pereira, James Justin represented the other end of the scale. A 21-year-old coming off the back of successive promotions and a place in the PFA League One Team of the Year is at the perfect place to develop and thrive.

CB: Craig Dawson (Watford, £5.5m)
The fanfare was understandably lacking, but Watford trading the retiring Miguel Britos for a 29-year-old Craig Dawson at minimal expense was one of the better exchanges of the summer. The Hornets achieved relative success last season with central defensive options of Craig Cathcart, Adrian Mariappa and Christian Kabasele, a combination thereof starting almost every game. A fourth option was desperately needed and, despite his season in the Championship, Dawson remains a solid Premier League defender.

CB: David Luiz (Arsenal, £8m) God, this is exciting. Will the Premier League-winning former European champion improve Arsenal’s defence, or will he be controlled by a 10-year-old on a PlayStation all the way to oblivion? Many have their reservations over introducing David Luiz to a side containing Shkodran Mustafi, but there are few better short-term and available solutions to such a lingering problem.

LB: Angelino (Manchester City, £5.3m)
They might present “a danger that football has not seen before,” but Manchester City can pull off a bargain like anyone else. Angelino featured three times for them in six years after signing in 2012, being sent out on four separate loans. Yet barely 12 months after moving to PSV, being named the Eredivisie’s Talent of the Year and taking his place in the Team of the Season, he is back for a relative pittance to provide homegrown competition for Oleksandr Zinchenko (£1.7m) at left-back. Poor Benjamin Mendy (£51m). Poor, Benjamin Mendy.

CM: James McCarthy (Crystal Palace, £3m)
Four-hundred-and-five minutes of Premier League football since January 2017 goes some way to explaining the meagre fee involved in reuniting James McCarthy with James McArthur. A succession of hamstring and knee injuries bled into a double leg break for the midfielder, who returned to a Marco Silva-led Everton side instead of the Ronald Koeman one he had established himself in. If he can prove his fitness then Roy Hodgson has a 28-year-old with seven full seasons of playing in England’s top flight behind him. Just a shame about that unveiling video, really.

Still can't work out if Crystal Palace's James McCarthy announcement is the greatest or the worst of all-time 🤣🤣🤣 pic.twitter.com/PN2mHCUa3O

CAM: Bruno Jordao (Wolves, £8.3m)
“I’m very happy and very proud to be here. I know it’s a big team, with big dreams,” said Bruno Jordao upon arriving at Wolves alongside winger Pedro Neto, like a budget European Carlos Tevez and Javier Mascherano. His perennial teammate is undoubtedly the more lauded of the two as a Barcelona-courted Portugal youth international, but Jordao is a promising talent in his own right. The 20-year-old cannot wish for a greater mentor than Joao Moutinho, a more suitable manager in Nuno or a more exciting team than Europa League-bound Wolves.

RW: Jota (Aston Villa, £4m)
To offload Gary Gardner to Birmingham for a reported £2m opened up the wound. Bringing in their bitter rivals’ club-record signing for just £4m poured salt directly into it. Jota was one of the jewels in Dean Smith’s Brentford crown and will be a key player in Aston Villa’s Premier League return. When Jack Grealish considers you “a typical Spanish player”, “technically gifted” and the best arrival out of more than £100m worth of deals, you know you’re onto something good.

LW: Jay Rodriguez (Burnley, £10m)
For an initial £5m, Burnley could not have got anyone better. Indeed, in their position as a team likely to be battling relegation, they perhaps could not have got Jay Rodriguez without their prior working relationship. But they will hope his 22 goals in the Championship last season transmit to another fruitful Premier League spell. As an alternative to the revolving door of really bloody tall battering rams at Turf Moor, he could pick a few locks when needed.

CF: Danny Welbeck (Watford, free)
Every club needs one, but Watford are the lucky sods to claim him. The reported wage demands and signing-on fee offered something of an explanation as to why Danny Welbeck was not being inundated with offers. His injury struggles should be taken into account, too. But he is a 28-year-old, versatile, homegrown England international with a decade of Premier League experience and lessons learned under the tutelage of Sir Alex Ferguson, Arsene Wenger and Steve Bruce. You simply cannot argue with that.