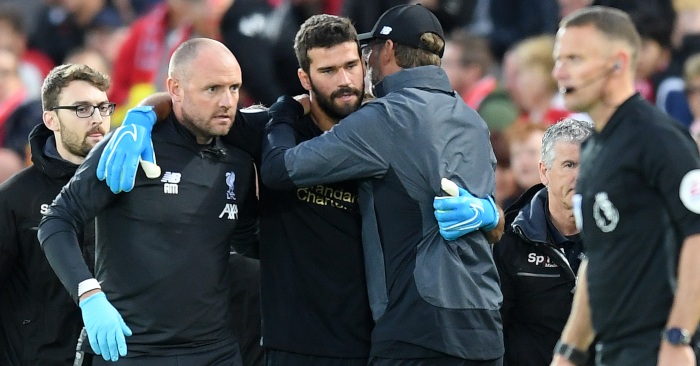 It reads like a fantasy team, but this XI are just looking forward to getting on the pitch this weekend after lay-offs of varying lengths…

Goalkeeper: Alisson (Liverpool)
After ten games in the Liverpool goal, Adrian will plonk himself back on the bench this weekend when Alisson returns from a two-month lay-off. It has been fun to watch the Spanish No.2 acclimatise to life between the Reds’ sticks, especially in the early days when he was wiped out by a fan at the end of the Super Cup final before boobing badly at Southampton the following weekend. “We have not been able to complain much at all,” said Liverpool goalkeeping coach John Achterberg of Adrian’s performances, but Klopp presumably cannot wait for Alisson to get his gloves back on and bring back some composure to a defence which has looked uncharacteristically stretched in his absence.

Right-back: Aaron Wan-Bissaka (Manchester United)
Their defence is one of the few good things about Manchester United at the moment, which was only to be expected after they spent £130million on remodelling half their back four in the summer. Harry Maguire has taken most of the spotlight but Wan-Bissaka has been similarly impressive at right-back – a position no longer a problem for United after a couple of years of mending and making do. Only Ricardo Pereira has made more tackles than Wan-Bissaka this season, though the Leicester full-back has managed only three more with the benefit of two extra matches. Wan-Bissaka looks likely to return from tonsillitis for the visit of flawless Liverpool, and how they might need his defensive nous…

Centre-back: John Stones (Manchester City)
So desperate are Manchester City for defensive reinforcements that Stones’ return is being greeted with huge relief at the Etihad. This is the centre-back Pep Guardiola decided he couldn’t trust for much of the run-in last season and who failed to even make the bench for the derby in April. Of course, we all know there is a defender in Stones, in whom Guardiola sees great potential. But not only does he need to demonstrate a swift reversal of months of poor form upon his return from a hamstring injury this weekend, but he also needs to being some leadership that absolutely no one is convinced he possesses.

Meanwhile, back at base… ⚽️

Centre-back: Antonio Rudiger (Chelsea)
The Chelsea centre-back returned from a knee problem to reinforce a defence that had conceded nine goals in their opening four games, only to suffer a freak groin injury halfway through his comeback at Wolves. In his absence, the Blues have kept only one clean sheet in 12 games under Frank Lampard, with neither Andreas Christensen nor Kurt Zouma stating a convincing case to keep their place. Rudiger’s return would be well timed since Christensen has picked up an injury on international duty and Lampard will be hoping the Germany defender can bring some solidity to a rearguard that has been riddled with errors so far this term.

Left-back: Emerson (Chelsea)
The Brazil left-back was an ever-present in Lampard’s first five games but injuries have deprived the Chelsea manager of his first-choice left back in five of the six matches since. During the one match he played during that period, the 2-1 home defeat to Liverpool, Emerson suffered a recurrence of his old thigh injury, making Lampard especially wary of rushing him back once more. But that desire to restore him to Chelsea’s defence is a measure of the regard Emerson is held in at Stamford Bridge these days. Not long ago, Marcos Alonso was one of the first names on the team-sheet. Now, like Cesar Azpilicueta, many Chelsea fans would prefer neither were on there at all.

Midfield: Paul Pogba (Manchester United)
The Manchester United midfielder has missed five of the last seven matches and in the two he was wheeled out for – Rochdale and Arsenal at home – Pogba didn’t look fit. Or arsed. Probably both. But with Liverpool coming to town, Solskjaer wants his big guns back and the United boss is hoping a vitamin D boost from the Dubai sunshine will help with the healing process and put United’s best player in a brighter frame of mind. Should he be fit, as is expected, the next question focuses on where to play Pogba. Can he be trusted in a screening pair in front of the back four, or should United follow England’s lead?

Almost there 💦 show off or motivation 🤔 you choose ? Same result at the end anyway 🤷🏾‍♂️🙏🏾#enjoyworking

Midfield: Kevin De Bruyne (Manchester City)
The Manchester City star has missed only one match with his groin injury, but that just happened to end with a blank on the scoresheet and a defeat. The only other Premier League game De Bruyne didn’t start? The 3-2 defeat at Norwich. Those are the only two games in which City have not benefited from a De Bruyne assist – eight in six starts in addition to two goals of his own – and it’s hardly a coincidence that when De Bruyne doesn’t play, neither really do City. At Crystal Palace, a team with form for frustrating City, Guardiola needs De Bruyne at his creative best to get their title challenge back on track.

Midfield: Giovani Lo Celso (Tottenham)
Tottenham are in need of some good news and though there is no desire to rush the Argentina star back from an ankle injury sustained during the last international break, Lo Celso would offer Mauricio Pochettino a welcome boost should he be fit enough to play a part against Watford on Saturday. Pochettino is likely to ring the changes after Christian Eriksen, Heung-min Son and Erik Lamela created almost nothing for Harry Kane against Brighton and, in theory, the visit of the Premier League’s bottom side could offer Lo Celso a comfortable return to action. Or Watford could do a number on Spurs and all hell breaks loose once more…

Right forward: Xherdan Shaqiri (Liverpool)
The Liverpool attacker should be back from a calf injury in time for the trip to Old Trafford, not that it matters a great deal. The scorer of the Reds’ last two goals against United only managed three substitute appearances before his lay-off, the longest of which was six minutes. He hasn’t started a Premier League game since late January and Shaqiri, not a man who deals well with rejection, has acknowledged that it is not a sustainable situation: “Nobody likes to sit on the bench. It’s clear that I want more time. I have to look at the situation and find a solution.”

Centre forward: Anthony Martial (Manchester United)
You would hardly blame Martial for not rushing back from a hamstring problem to lead this Manchester United attack but reports suggest the Frenchman is ready to take his place through the middle of Solskjaer’s forward line for a game that thrust him onto the world stage in 2015. Marcus Rashford will probably be delighted to see his team-mate return to carry the burden down the centre, allowing the England star to move to the left, where he rediscovered his long lost mojo on Monday. Rashford may have failed his audition to be United’s long-term centre-forward; now it is time for Martial to recommence his.

Left forward: Alexandre Lacazette (Arsenal)
Arsenal’s trip to Sheffield United gives Lacazette a crucial few extra days to get in shape to return to the Gunners’ attack after a month and a half on the sidelines with a pesky ankle injury that had dogged him through the early weeks of the season. Not that it showed when Lacazette scored on both of his starts against Burnley and Tottenham. With Nicolas Pepe struggling to pick up the slack, Pierre-Emerick Aubameyang will be thrilled to see his mate return to take some of the burden off his shoulders.