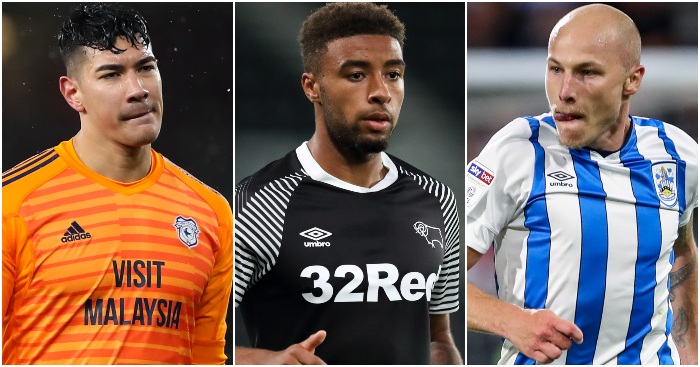 As well as sky-high transfer fees and near-constant world record breaking moves this summer, the current transfer window has also seen an abundance of Championship stars step up to ply their trade a level above in the Premier League. But which EFL stars could – and should – follow the likes of Che Adams, Oli McBurnie and Adam Webster in making a move to the top tier of English football in the final hours of the summer window? Here’s an XI ready to go…

GK: Neil Etheridge
After a largely nomadic, rarely successful Football League career for the likes of Walsall, Bristol Rovers and Crewe Alexandra, Filipino Etheridge had a late resurgence at club level after impressing in place of Lee Camp at Cardiff City in the Bluebirds’ promotion season before cementing himself as first choice shot stopper before the Neil Warnock-led outfit’s Premier League campaign where the 29-year-old impressed with penalty saves in the Welsh side’s first two league matches – helping him to Premier League Player of the Month and the club’s player of the season despite relegation. South Coast rivals Bournemouth and Southampton should be going all out for a first choice ‘keeper of his quality.

RB: Jayden Bogle
Already seemingly courted by Burnley this summer, the young right back had a breakout season at Pride Park last season, becoming a key part of Frank Lampard’s side’s assault towards the Championship play-off final. Comfortable defending and attacking in equal measure – quite the rarity in modern full-backs, Bogle would be a good option at the back for any non ‘top 6’ side, but the Clarets should be looking at a younger – and potentially better – option than Matthew Lowton.

CB: Julian Jeanvier
Far be it from me to halt Brentford’s theory of evolution even more and see another one of their stars off before the farewell to Griffin Park season has even truly begun, but Jeanvier proved himself as one of the most underrated centre-backs in the the Championship in the second half of last season. A steady presence alongside eight figure defender Ezri Konsa, and arguably the more complete defender, the Guinea international would look a good bet in the back line at Watford or Leicester City.

CB: Christopher Schindler
Something of a cult hero in the blue and white corner of West Yorkshire over the last three years, the German has many qualities on his list that mean any one of the relegation threatened clubs this season should look at recruiting the 29-year-old, who should not be judged on the Terriers’ defensive struggles – especially during the side’s sophomore season last time out. A near-ever present across three seasons at the John Smiths’ Stadium should provide Schindler a platform to more established Premier League outfits. Everton need another defender, while he would also fit the Norwich City mould should he crave first team football.

LB: Rico Henry
A second Brentford player on this list to join the already departed Konsa proves just what a great job the Bees’ recruitment team have done over the last half decade. But a lack of outstanding second tier left backs and Henry’s emergence from a great youth product to a consistent full-back capable of attacking and defending to a good standard means that Henry would be a good bet to link up with Dean Smith for a third time, at Aston Villa.

CM: Josh Brownhill
One of the young, up-and-coming Football League talents in Brownhill has turned himself into one of the best midfielders in the division. His lack of goal involvement and slight frame make him one of the less obvious names on this list, but his ability to sit deep in midfield combatted with a knack for controlling the tempo of matches mean the former Preston North End man would be able to adapt to the Premier League with minimal fuss. He certainly fits Brighton’s needs while he could be a better option for Crystal Palace than James McCarthy.

CM: Callum Patterson
Admittedly, Patterson could play any one of a multitude of positions to varying degrees of success, but having failed to convince Warnock of his ability as a right back and only ever being a stop gap up top for the Bluebirds, the centre of the park is where Paterson puts his 6ft2 frame to best effect, able to get stuck in but with better feet than one would think at first glance, Paterson would be a good addition for Premier League sides in need of bloatin – the Uniteds Sheffield and Newcastle spring to mind.

CM: Aaron Mooy
Australian Mooy – like team-mate Schindler – has a variety of qualities which make him good enough to fit the bill at more than a handful of top tier clubs. A playmaker who likes to sit deep in a midfield partnership with a hard hitting tackler, Mooy would be a great compliment to slip in at Wolverhampton Wanderers and would add much needed flair in the middle of the Selhurst Park for Crystal Palace. But it seems like Brighton have got there first.

RW: Jarred Bowen
Another player to have been linked with clubs higher up the pyramid this summer, the eight figure touted Bowen has come a long way since his 2014 National League debut for Hereford United, and 22 Championship goals last season for the similarly aged forward mean Bowen should not only be targeted by the likes of Southampton and Newcastle for first team opportunities, but could surely be a great squad option for the likes of Liverpool and Tottenham Hotspur.

ST: Jack Marriott
Something of an enigma on this list as Marriott is not even first choice in his own position at current club Derby County, but the 24-year-old is making all the right sounds following productive spells at Luton Town and Peterborough United and his role as a key player for the Rams in the latter stages of last season mean that if promises of regular starts fail to materialise under new manager Philip Cocu, Marriott would provide great options for bottom half sides. Palace need options up front and he would be worth fighting for by Norwich City over Jordan Rhodes.

LW: Kamil Grosicki
Poland international Grosicki was something of a coup for Hull City when he signed for the Tigers as a Premier League outfit in January 2017 and the fact he has since stayed at the troubled club during average to poor Championship campaigns while making an even bigger name for himself means that this is the perfect – and perhaps last – opportunity for the 31-year-old to get a shot at the Premier League which will last longer than five months. A goal roughly every four games from the wing, Grosicki would be a great addition to the likes of Burnley and Newcastle.