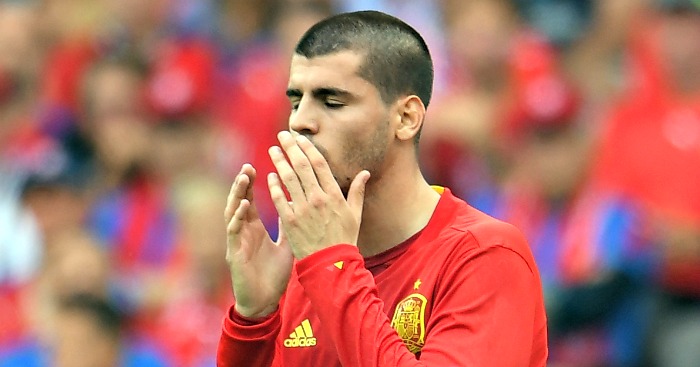 As a rule, Spain’s recent tournament history correlates with the identity of their starting striker.

David Villa finished as top goalscorer at Euro 2008, a wonderful, skillful finisher in a team playing at the peak of their collective powers – one built for a striker.

Two years later, Villa’s goals were again the difference as the European champions were crowned the world’s best.

At Euro 2012, the cycle of dominance was completed as Fernando Torres spearheaded a different Spain, a more team-oriented, lower-scoring Spain, into a tournament in which no credible challenger emerged.

For the 2014 World Cup, Diego Costa was entrusted to continue the excellent work of his predecessors. The Chelsea forward was an ideal fit for La Furia Roja in name only. The physical, abrasive forward did not complement a fractured collection of players whose hunger, somewhat understandably, had waned. Where the forwards chosen to guide their previous successes had mirrored the national side and its style to perfection, the selection of Costa was a mistake head coach Vicente del Bosque sought to rectify with his non-inclusion for Euro 2016.

Del Bosque will hope his confidence in Costa’s replacement, Alvaro Morata, is not similarly misplaced. With a narrow victory over the Czech Republic, Spain joined the growing list of potential tournament victors to struggle to impress in their opening fixture.

To claim that much of it was down to Morata would be folly. But the Juventus forward tripped and fell off the stage halfway through the first of his summer auditions for a proposed £50m move.

Spain, to a point, impressed against the Czechs. Their passing was predictably crisp, their midfield predictably dominant, and the central defensive pairing of Gerard Pique and Sergio Ramos predictably close to making a decisive mistake. Andres Iniesta was irresistible, David Silva excellent and Jordi Alba superb. An elite striker would have relished any of the 17 goalscoring chances created in Toulouse on Monday.

But, despite being expected to rejoin Real Madrid this summer, and despite being courted by a number of Europe’s leading clubs, Morata is not an elite striker. At least not yet. The 23-year-old’s energy could not be faulted against the Czechs, but his movement was lacking and his nous in the striker’s position almost non-existent at times.

“He was quite naive,” was the simple post-match assessment from Ian Wright. The former Arsenal man may not be the most reliable critic on a number of matters, but Morata ought to take advice from an individual who scored 314 goals in 629 career appearances. The Spaniard tested Petr Cech with two of his four shots, but with Iniesta, Silva and Cesc Fabregas providing the bullets, the 23-year-old could not stop firing blanks.

This summer is a crucial one in the landscape of the transfer market for numerous clubs. Arsenal’s question: Who is a notable improvement on Olivier Giroud? Manchester United’s question: Who can provide a reliable focal point to an attack? Chelsea’s question: Who can we sign who will score 20 goals a season? On this evidence, Morata is not the answer. A striker with 25 goals in 110 league games rarely is. The forward’s star has risen rapidly as Spain search for their next great striker, their heir to the throne of Villa and Torres. He has been elevated into a position which his talent does not yet justify.

International tournaments so often provide the setting for players to earn big-money moves. Karel Poborsky did it; John Jensen did it; Pavel Nedved did it. After passing screenings in the Champions League, La Liga and Serie A, this was Morata’s first audition. He fluffed his lines.