Home All The News A Football365 love letter to… Ally McCoist 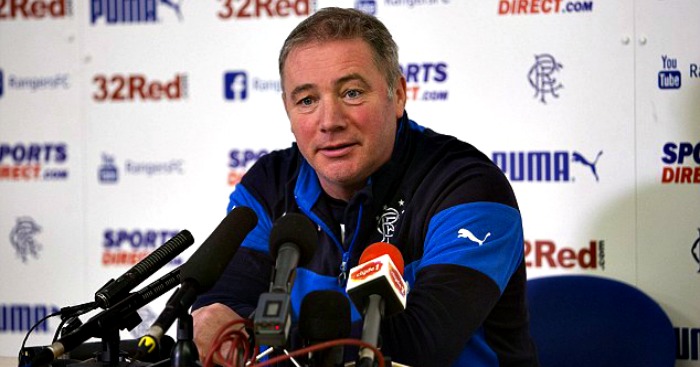 A Love Letter to… one of the media’s most cheerful performers and a man never shy of a bit o’ banter. That’ll be Ally McCoist, then.

Why the love?
A simply incredible striker who is the second all-time highest scorer in Scottish football with 396 goals in 712 games. A phenomenal scorer for Rangers and a serial trophy winner, he can count 10 Championship medals and 10 cups in his collection. Often overlooked is that he was joint-top scorer in the 1987-88 European Cup season with four goals and he won European Golden Shoe two years running from 1991-93.

For years it seemed like he just couldn’t miss the goal. If you want a reminder of how good he was, watch this.

The sight of Coisty peeling away from the goal, a massive grin on his face, was one of football’s most commonplace things to witness for two decades. And better still, it seemed as if every goal was celebrated as though it was his first. He was a player who clearly genuinely loved doing the job and had that rarest of all qualities: he was a fan on the pitch.

Add in 61 caps and 19 international goals and if Ally isn’t a footballing hero, then no-one is. The joy he brought to so many lives is not forgotten and has served him well, firstly in his managerial career and latterly into his media career where his default cheeriness is always welcome.

Vice Sports quite brilliantly said: “These isles have never produced a more archetypal ‘women want to be with him, men want to be him’ figure.”

Were there affairs with air stewardesses and movie stars? Oh yes, of course, there were. But rightly or wrongly, he seems to have avoided the tabloid Love Rat headline and now in middle-age seems to have settled down.

When it comes to his life as pundit, he’s not used as often as many would like but when he does pop up on Scottish football coverage and occasionally on 5 Live he’s an erudite and insightful performer who isn’t in the slightest bit cynical or old mannish. There’s no hint of harking back to a golden age that many of his generation find too easy to drop into. Rather, Ally just seems delighted to be working in an industry which covers the sport he loves so much and that comes over the airwaves so clearly that it cheers the soul of the listener or viewer. And let’s face it, we need more people in our lives who spread a bit of joy.

Superhero skills
Some in football media hate being caught by surprise because they fear making a fool of themselves, or saying the wrong thing. Not Ally. He positively relishes being taken by surprise. Look at the mischievous joy on his face here when accosted by the Scottish TV and radio legend that is Tam Cowan.

And he was an absolute natural for Question of Sport. Relaxed, quick-witted and sweary in the outtakes, he’s really funny. This will cheer your day up. If you have time, watch all of them.

Has a wonderful non-threatening version of the Bellshill, south-east Glasgow accent. He has a habit of breaking up the most important word in a sentence into syllables and has a soft, lyrical and resonant tone which lends itself brilliantly to being a raconteur, as this story about Gazza and two trout well shows.

It’s the sort of voice which is an absolute godsend to football media, especially radio. Instantly identifiable, always engaging, a laugh never far from his lips, he brings the good vibes. His co-comm work this week alongside Jonathan Pearce on 5 Live was a thing of wonderment. With Jonno on cracking form, making jokes and references to being very old, Ally was delighted to be in an on-air 90-minute banterthon and, quick-witted as ever, made the whole thing rock along as part football commentary, part social club double act. Wonderful, wonderful stuff.

And let’s not forget he was in a movie with Robert Duvall, ‘A Shot at Glory’, about Kilnockie FC’s cup run.

Being a man of a certain age, it’d be easy to get caught saying something a little off colour. But somehow, that’s never happened to Ally. Very much a Real Football Man, the Scottish equal of the PFM, and yet his is not an acrid, paranoid, chippy trip. Coisty is all about the party and one suspects that he’d be tremendous value on the sort of epic drink-up which could floor a rhino. 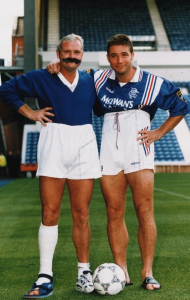 Ally isn’t one for the lean ex-pro, gym-based way of life. As he hits middle-age he’s got the pleasingly lush, widening frame of a man who understands the beauty of an elasticated waist. Jacket ‘n’ jeans is a go-to look for yer man and in his playing days, as a Man Of The People, he was always more Topman than Versace and that was another reason to love him. Almost certainly owns a top hat.

What the people say
Amazing to think that if you’re 20, you were born in the year Coisty left Rangers. And if you’re under 30 you probably don’t even recall seeing him play. Nonetheless, he has lots of fans who enjoy his effervescent style and look forward to his media appearances.

‘As a pundit he strikes me as someone who knows more than he lets on, and considers his input to a conversation, as opposed to those who can’t stop themselves spewing forth their train of thought. A refreshing trait!’

‘I once heard he’d been to a Springsteen gig I had bootleg cassette tapes of so I made copies and sent them to him and got a lovely letter and signed photo back which I hadn’t asked for!’

‘I’d like to know where his pronunciation comes from. Every vowel and consonant is delivered a-b-s-olutely perfect.’

‘If there were a top scorer chart for charity games and testimonials, Ally would be streets in front of anyone. I’m convinced he’s played in every one since about 1995 and bagged at least a brace in each.’

‘Massive hero of mine for too many years! Many happy memories of goals in the glory years and a genuine, funny and likeable guy. Would love to spend a few hours in his company.’

‘Handled his time at Rangers after liquidation with more dignity than credited with. Had to watch the club he loved falling apart at the seams and kept it mostly together. Equally at home dishing out banter, PG chat on Question of Sport or accessible punditry on TV or radio.’

‘Seems like a man at peace with himself these days. Less banter and more insight that feels actually worth listening to. Definitely at home on the radio.’

‘Massively nice – too nice – and I find it truly bizarre. If he’s not laughing and smiling, he has the air of a man who is on the cusp of laughing or smiling. As though 1980s Old Firm football hasn’t scarred him at all, which is remarkable when you think what he’s seen and heard.’

‘Ally is, and always will be my hero. He has brought me so much joy over the years and so many happy memories. Super in so many ways.’

‘Funniest moments are probably with Gazza but I’ve always loved this quote when he was late for a meeting with Sir David Murray: “Sorry, Mr Chairman, but this is the earliest I have been late for some time.”‘

‘He came to watch a Greenock Morton game when injured, I was working on the main stand turnstile and watched him sign every autograph and speak to every child, he made their day and you got the impression that was just him, no act.’

Future days
In the latter stages of his tenure as Rangers manager, Ally didn’t always look in the best of health. The intense pressure of the situation was certainly taking its toll. Happy to report these days he seems in good shape and his passion for the fitba has not diminished at all.

Ian Wright rightly gets a lot of gigs as a good vibes man, and Coisty deserves a few of his own. Like Wrighty, it’s also very much the case that as he eases into his mid-50s he’s got a wealth of experience under his belt to draw on. This gives his work a level of insight and, on occasions, heft. I recall a show on 5 Live where he and Neil Lennon were on air together and it was one of the most compelling couple of hours because they had both been through so much in their playing and managerial careers, but it was all disseminated with sharp wit and an almost poetic elegance that made it compelling.

In that respect, it wouldn’t surprise me if the glory days of Ally’s media career still lay ahead if given the chance. And that would be, as the man himself might say, ab-sol-ute-ly mag-nif-i-cent.