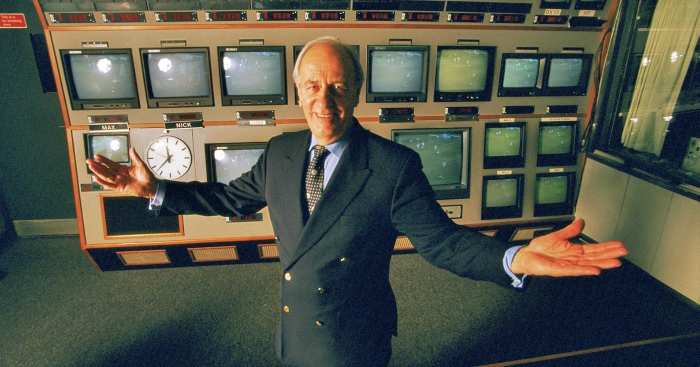 Johnny is letting his love leak all over great people in football TV, radio and in print. This week, he’s going to flick one you know. That’ll be Brian Moore, then.

Why the love?
Long, long ago, back when everything was black and white, Brian was the BBC’s first football correspondent in 1963. He also commentated on the 1966 World Cup final for the corporation.

But it is by presenting The Big Match on London Weekend Television from 1968 to 1992 that he cemented his legend. To those of us in the regions, it was an impossibly glamorous show and always had extensive highlights of three games on, whereas on Tyne Tees we’d usually just have the one. It had players and celebrities on. Occasionally, they’d show The Big Match if there was no cameras at a local game, and when they did it felt like eating proper chocolates instead of making do with Revels.

By 1983, with the end of regional football, The Big Match was the sole highlights show. Brian was the ITV football king.

Seemingly belonging to no specific class or social grouping, he always was incredibly avuncular and he had the ability to seem kindly disposed towards you as an individual on the other side of the screen. He wasn’t just a warm person, he seemed actually friendly.

When someone is a household name in your life, taking you from being a small child to an adult, it’s hard to not feel like they are one of your extended family, so in 2001 when he died at just 69, it was a very sad day indeed.

Superhero skills
Here’s a funny thing: he went to the Cranbrook School, just as Barry Davies did. They seemed to have the same permanent degree of baldness too. Perhaps public school does that to a chap. Ye olde cricket commentator Peter West is also an alumnus. Do they teach commentating there?

He was an inveterate goal extender. In exclaiming that “it is a wonderful goooaaaaalll”, he somehow managed to extend the ‘a’.

While perhaps lacking the stellar linguistic chops of Davies, many great moments in football are nonetheless defined by his words. Perhaps none more so than this in 1989, (with next week’s Love Letter recipient Pleaty on the co-comms).

And this alongside Big Ron, of course.

Back in 1970, an era where professionalism hadn’t killed passion and you were allowed to turn up on telly after drinking champagne all day, Brian was a superb ringmaster at the World Cup, keeping the so-called Midnight Cowboys, Malcolm Allison, Derek Dougan, Pat Crerand and Bob McNab, under control. Proper arguments would regularly break out. It made riveting TV. Never as flamboyant or divisive as Jimmy Hill, he was a consensus builder. Incidentally, I bet Jimmy used to stand at a urinal in exactly that pose.

In 1974 they were back again and wearing eye-melting checky jackets. Look at the one on the Doog! Big Mal looks like he’s got a massive brandy sweat on and his pants seem to go up to his ribs. Big Jack’s lapels are actually wider than the jacket itself. Brian is clearly the only sane man present.

He would often find himself in the studio with Clough and few could handle him as well as Brian. Despite his friendly demeanour he wouldn’t take any nonsense from Cloughie as this short clip from the famous England v Poland game shows well.

Style guru?
Given he worked on TV through at least 20 years of appalling mainstream jacket and tie-based fashion, he usually kept it plain and simple. Whilst others would wear garish, some might say grotesque polyester jackets in brown and orange, Brian favoured the plain grey, dark blue or a light pinstripe.

Brian was one of those men who was always somehow seemed middle-aged.

While Brian seemed the very embodiment of decency, and would never knowingly get involved in a dwarf-throwing competition, nor go to a club called Chunky’s Chubber, nor drink a pint of wine, the PFMs will always raise a glass of whatever foaming toxins they have to hand to the memory of Brian.

Every modern PFM feels he is living in the wrong era and would have loved to ply his trade in the 70s, wear clothes made from garish man-made fibres, drink heavily before going on TV and getting into passive-aggressive arguments with Brian Clough and Don Revie whilst expressing your innate xenophobia via national stereotypes without having to worry that you’ll get put in jail for a human rights crime.

It was a man’s game back then, Jeff, not like now when you have to have 4% body fat, and like headphones, foreigners and pasta. I mean, pasta is boiled wheat, Jeff. It is! Literally, boiled wheat! Literally. Boiled. I’m not ‘avin’ that. It’s wrong. You don’t boil bread, do you? But the foreign lads love it. I’ve never boiled wheat and I never will, it’s mad. What’s wrong with a saveloy?

The PFMs miss Brian and regularly get on Reidy’s thermite, kevlar and teflon whisky cocktails and become maudlin about how ITV was brilliant back then and they should never have taken Love Thy Neighbour and Mind Your Language off. They were brilliant programs them, Jeff, like proper, proper funny, proper funny, not like so-called alternative comedy. Alexi who? Not for me, Clive. I’m not being funny but they’ll put women “comedians” on the telly next. They will, Jeff, and then where will we be, eh? Without any tea, that’s where.

What the people say
There can’t be many commentators whose words are preserved in writing at a football ground but it is at Villa Park where a banner reads: “Shaw, Williams, prepared to venture down the left. There’s a good ball played in for Tony Morley. Oh, it must be! It is! Peter Withe!!” Brian’s commentary during their 1982 European Cup triumph lives on. That is the mark of a legend.

While there were a few social media detractors, the vast majority felt as I do: that he was a lovely, comforting presence, a consummate pro and a bridge from the polite old school world of broadcasting to the more brash modern era.

‘His commentary of Michael Owen’s goal in the 98 is scorched into my memory – ohhhh whaaaat a wonderful goal from Michael Owen.’

‘He knew Koeman was gonna flick one because he’d been to the training ground and watched him practising. Top professional. Great voice too.’

‘Like Bazza D, his delivery was almost musical. Dynamics, tempo, texture – he’d go from a whisper to a growl according to the play.’

‘He belonged to the generation whose idea of ‘casual’ was to wear a blazer and tie. A sense of decency pervades when thinking of him.’

‘”It’s up for grabs nowwwwww!” What more can you say? A legend.’

‘Authority. Gravitas. Decency. Perspective. He provided everything that ITV lacks. How he is missed.’

‘Made a dull 70s Sunday afternoon so much better.’

‘Final of France 98 offered us choice of Motson on BBC or Moore’s last game on ITV. Only time I’ve ever chosen ITV in that situation.’

‘Brian Moore was the best.’

‘Just a brilliant commentator. Also was a director at Gillingham, so no BCB whatsoever.’

‘Inspired the title of the best football fanzine of all time, Gillingham’s Brian Moore’s Head Looks Uncannily Like London Planetarium.’

‘My favourite of all commentators. His voice was perfect for the job.’

‘His description of Michael Thomas at Anfield and Ronald Koeman in Rotterdam are absolutely as good as commentary gets.’

‘The football equivalent of Henry Blofeld.’

‘He was so excited and enthusiastic about. As a kid I thought it was the best thing ever. He was a master of his craft. “And it’s in there!”‘

‘The commentator in my head when I was scoring imaginary goals when I was a kid.’

‘The key to Moore’s brilliance was his voice. Which is a bit of an unfair advantage, but there you go. He was just a pleasure to listen to.’

‘Always worked best with an abrasive yang to his ying, Atkinson and Keegan complemented him perfectly as co comms.’

‘He made Sundays a joy. Routine roast lunch then The Big Match, immediately afterwards my brother & I raced to recreate goals in the park.’

Future days
The fact that he died aged 69 in 2001 was a tragedy, but a reminder that life is a short ride down a one-way street. We’re all going one way and we’re here for a good time, not a long time. In so many ways, it really is all up for grabs now.