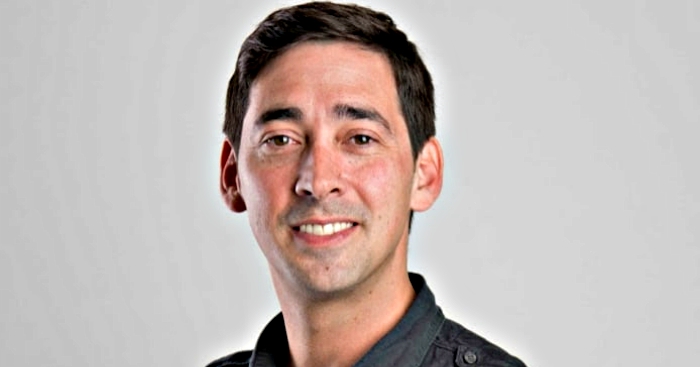 Johnny has painted his fabulously long love gun green in tribute to this week’s subject. That’ll be Colin Murray, then.

Why the love?
Has been working on radio and TV for almost 20 years now in music and sport. Owns the sort of distinctive could-start-an-argument-in-a-room-of-mirrors Dundonald, East Belfast accent that sounds like it could be used to etch glass, or descale a fish.

Worked on a lot of radio stations, notably Radio 1, 5 live and TalkRadio and on TV fronting up MOTD2. Presented Channel 5’s ventures into European football when he took over from John Barnes (remember that weird idea of having JB present?) That was incredibly 11 years ago now!

Replaced Adrian Chiles on MOTD2 where his informal, fun style worked really well for viewers and set a high standard for Mark Chapman et al to follow. It was said he was disposed of because some of the old ex-pros didn’t like him or his style, though he has since said he doesn’t believe that was true.

At the time the Belfast Telegraph reported: “It is understood Murray was looked upon as irritating by some of the Match of the Day pundits who felt he was there to ask them questions rather than offer his opinions on matches and players, which he regularly did.” It was also claimed that Alan Hansen had told him he should leave making negative comments about players to the ex-pros.

If any of this is true, then we all owe Colin a debt of gratitude because, just four years later, we live in very different days where non-playing presenters are far more strident and far less cap-doffing to often dullard ex-players. Maybe that is, in part, due to the likes of Colin.

This summer he was given the Channel 5 EFL highlights show gig.

Has always had a confident, down-to-earth approach. His informal, chatty radio style, which most of us first heard in 2003 alongside Edith Bowman on Radio 1, translated well into sports broadcasting, especially as a more informal style became the default.

Many feel he’s at his best as host of 5 live’s Fighting Talk. Has recently returned to the helm. Had his live “I could turn Clare Balding” moment, which seemed to precipitate his move to talkSPORT after the BBC high-ups threw their skirts over their heads. Let those who have never made an ill-judged comment on live TV cast the first stone.

He left 5 live to work on TalkSport so he could “be myself without every so often spasmodically having to deal with the sh*t of the outraged few”.

Loved because he is not a jock and doesn’t appear to have any leg-squeezer geezer about him.

But controversy does follow him around with last month’s announcement that he was to take over from the excellent Lynsey Hipgrave and George Riley on Channel 5 on Saturday nights. The station apparently took advantage of a six-week break in the two presenter’s contracts, which must have been somewhat vexing for them.

The Mirror reported that “top brass at the EFL are unhappy with the network’s decision to hire Murray, and have written to its clubs telling them it did not endorse the move.”

Both departing presenters are super-talented and will surely not be short of high-profile stages on which to strut their not inconsiderable broadcasting chops. That being said, it did seem an odd decision to make a change after just one season and I can’t find any statement from the station offering an explanation, which is disappointing.  Not sure why the EFL are sticking their oar in though.

Most famously, of course, Colin also attracted much respect for quitting talkSPORT when it was acquired by News Corp because of the Murdoch/Sun connection.

Very good at interviewing as his ‘at home’ podcast well shows. Seems to really give attention to detail and doesn’t slobber or toadie to the guests, no matter how famous, but has always done his research.

Clearly has a cultural hinterland which always reassures the listener that we are hearing a grown-up and not some superannuated boy whose adulthood was held in abeyance by being involved in football.

The 2009/2010 season saw him take a 5 live Friday night slot. The preview show was one of the best they’ve ever run. The Friday Social which fulfils the same role today often puts me in mind of Kicking Off With Colin Murray, with its mixture of enthusiasm, discussions and fun.

Doesn’t go down the “I’ve never played the game so I know nothing and must bow down to the ex-player” nonsense, which may or may not have lost him a job or two. If true it is an indictment on the weak, lily-livered bosses who employ people who have spark, wit and edge and then get scared when they display spark, wit and edge. Not everyone has to be everyone’s friend.

Style guru?
Has a trim and pleasingly moleish quality. Wears rather studious glasses. Almost certainly owns a close-fitting cardigan. Clothes seem of the quite pricey but casually fashionable variety. Certainly does not own chinos, nor a pair of Farah slacks. Doesn’t seem to have aged at all in 15 years.

No PFM worth his stomach ulcer and divorce settlement likes a presenter having views about football. Civilians should stick to asking questions to thems what has played the game, Jeff. Everyone else is an amateur, no matter how well-versed in the game.

But getting chucked off the BBC makes any PFM purr in admiration, as they fear those pinko liberal types more than anything except women and books, of course. But then to quit talkSPORT would seem like madness to most of them. Why would you do that? What’s wrong with the Sun, Jeff? It’s where I first saw two of my wives.

But on the other hand they like a chap who loves his sport, as talking about sport allows the PFM to distract his mind from his own mortality and the protects his conscience from nagging him into thinking he’s wasting his life and really should grow up and do something more useful. It also offers more opportunities to punch other men on the arm, which they count as one of their favourite hobbies.

Yet they respect any Celt when it comes to drinking, knowing as they do that the Scots, the Welsh and the Irish have all had a special liver fitted which can metabolize alcohol faster than Reidy can brew a batch of creosote and fermented mice wine. And he looks like he might fit nicely into a shopping trolley for post-casino japes beside a canal. But those glasses would have to go, professor.

But he is married to a Canadian composer and pianist who scores films and TV programmes and the PFM can’t be doing with them foreign women coming over here and marrying us. Also educated, talented women scare them. What’s wrong with wearing a bikini on a reality show for a living, Jeff?

And if he was to ring them up, they’d be terrified it was a bomb threat because the PFM hasn’t updated his cultural stereotypes since 1984.

So it’s all a bit confusing and no PFM likes being confused so would default to holding Colin out of a window by his feet whilst laughing in an over-loud manner, simultaneously weeping at the futility of their existence.

What the people say
His audiences definitely have an affinity to him, often from listening to him on Radio 1 while growing up. There’s also a feeling that he’s been hard done to on occasions and that he has a non-macho quality which chimes well with them.

‘He sacked off The Sun. That’s all the info I need.’

‘He ‘borrowed’ a lot of cigs from me in Istanbul final. Totally useless info for your purposes! Nice lad, though.’

‘Literally bumped into him on air at Glastonbury ’05. Wasn’t even mad. I would have been. I was smashed. Great presenter.’

‘The morning of NI v England broadcasting for Radio 1, remember him doing the conga in and out of bars around Belfast. Bought lots of drinks.’

‘Cardigan-wearing, glasses-using non ‘football men’ everywhere who are interested in football owe him a massive debt.’

‘Stands by his convictions by leaving his job at TalkSport. Fighting Talk is a better listen under his hosting style.’

‘I actually like him. Great as a presenter of FT and I enjoyed his anchoring of both MOTD2 and Football on Five. Loves his US sports too. I could see myself having a few drinks with him on more than one occasion as we’d have a bit to talk about.’

‘Liked him on Radio 1 (he gave Grandaddy some airplay!) and I enjoyed his MOTD2 hosting.’

‘Talksport’s figures have plummeted since he left.’

‘He was good talking about Forest Green Rovers recently. Insisted on looking beyond jokes about vegan burgers and the like.’

‘He’s a football fan, but not a “fan boy”. He clearly loves football but isn’t cravenly in awe of the footballers he meets.’

‘Spoke openly and well about how restricting hosting MOTD2 was for him. Excellent on radio. Fighting Talk is almost tailor made for him.’

‘I love his enthusiasm for the game. You can tell her really bloody loves it. Bet he can handle his drink as well.’

‘Does many a presenting gig, high up in snooker and darts, and yet looks younger every year! The Peter Pan of broadcasting.’

‘Hugely underrated. Warm, knowledgeable and with a lovely voice. Been treated badly by previous employers but always in work.’

‘His stance with TalkSport showed him to be a quality human being. Fair play to him….’

‘As a presenter, I really like him. Rescued Football on 5 after the ‘Barnes debacle’. Comes across as a fan, and not in awe of the ex-pros.’

‘A truly international outlook on life from his time in Toronto. A quirky look at things. Worth listening to even if you don’t always agree!’

‘Huge respect for him leaving a gig on principle. Won’t underestimate the balls that took – bills to pay, etc. Shows up lax morality of others.’

‘He tends to be relentlessly positive nowadays which is quite refreshing.’

‘Liked the way he tried to push the MOTD2 boys out of their comfort zone instead of offering mundane cliche.’

‘Criminally forced off MOTD for not genuflecting to the ex pros spouting clichés.’

‘His ‘at home with’ podcast is a great listen. He always seems keen to not ask the obvious questions.’

‘NFL on C4 was incredible. Like watching it with extremely knowledgeable mates. No patronising but not phoning in just cause it was at 1am!’

‘Makes FT what it is. Seems to have genuine fun doing what he does – especially when it comes to interacting with the public/listeners.’

‘Was a great presenter of MOTD2 despite working with some woeful pundits. His “At Home” podcast is a really different & interesting listen.’

Future days
Has a lot of fingers in a lot of different sporting and musical pies, so seems unlikely to be short of work. Flexibility and being able to paint with a lot of colours from the sporting pallete is a really useful tool in contemporary broadcasting.

There’s no doubt that he’s set to continue to be a distinctive broadcaster with a substantial following.