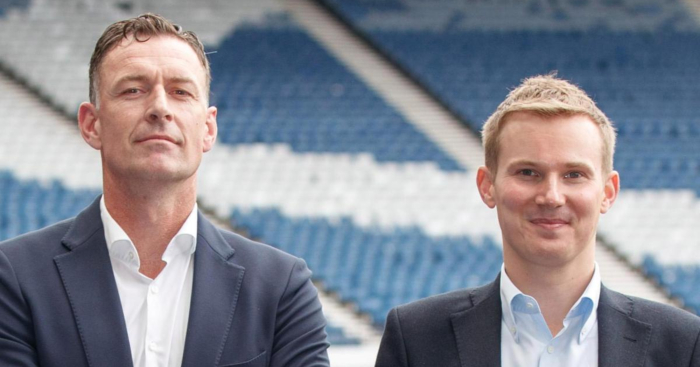 A Love Letter to…a familiar presenter of Scottish football who strays south of the border too, and someone who is one of Johnny’s current favourites. That’ll be Darrell Currie, then.

Why the Love?
He came to BT Sport from ESPN and has also worked at Radio Clyde, BBC Scotland and CNN International. He is now a much-loved and enjoyed presenter up here in the greatly misunderstood and underappreciated wonderland that is Alba fitba.

If you don’t have BT Sport, or even if you do, but are daft enough not to watch Scottish football, then you might not know of Darrell’s work. But those of us who do know that he is one of the best and most distinctive presenters in the game.

What those who shun Scottish football don’t know is it is excellent entertainment. We all know the skill level may not be the highest, but it more than makes up for that with effort and commitment. It is also increasingly competitive. While it may look like a one-team league, below Celtic, it is very hard to know who will win any game in advance of kick-off. So when DC fronts a show with regulars Chris Sutton, Stephen Craigan and Michael Stewart, among others, you can always be assured of some fun. It can be loud, in your face and argumentative but that’s why we like it so much and as such, it rather reflects Scotland more broadly – and certainly the football culture.

Superhero Skills
A pleasingly beta male in a land that is full of alpha male ex-footballers, more than most presenters, Darrell’s role is to keep the boys in line and largely to play the straight man, while the others rip the pish out of each other and often get very argumentative. It must be a difficult line to walk because these fellas can get quite arsy.

The key to the job is obviously to give them enough rope but know when to rein them in and even though Darrell looks about 15 years old and is up against some of grizzly old pros, he always manages to do that really well.

You never get the feeling he is toadying and though he’s got to keep his sensible head on most of the time, he’s also prepared to muck in with the craziness, such as in incidents like this.

He is also notoriously impressively calm under fire. Pitch invaders? Not a problem, pal.

But it’s not all fun and frolics, he can do the straight up and down interview stuff too and this season has sat down with the likes of Steven Gerrard for high profile one-on-one interviews. Because he’s pretty much got the whole of the coverage to himself, it makes him one of the most important people to front a show outside of the mainstream, and as such he occupies the enviable position of not being a household name in most of the UK, so has none of the hassles that might bring. Nonetheless, he is numero uno in his job.

He’s cut his teeth is some tough situations. He was pitchside when Fabrice Muamba collapsed and later recalled in a Scotsman interview:

“They had the defibrillator on him in the tunnel, myself and Les Ferdinand, who worked for Spurs at the time, were there, two feet from where he was lying on a stretcher. There was not an ounce of life in the guy. We feared the worst. I had to go on TV. They were throwing down to me from the studio and I was thinking: what will I do if the news comes in this guy has died?”

He was also reporting when the Dortmund coach was subjected to an attempted bombing. After such incidents, intervening in a row between Ally McCoist and Sutton on a cold night in Motherwell must hold few worries.

Style Guru?
A very young-looking 36, he’s one of those lucky men who will always appear to be at least 15 years younger than he is. Not an overtly ostentatious clothes horse but he clearly likes a nice jacket and has a good line in understated but natty and expensive-looking clobber. Haircut occasionally looks like it’s got a bit of inspiration from Tin Tin. Has a range of very heavyweight woollen coats to keep the cold out in the bitter Scottish winters. Must surely own more than one pair of high tog thermal long johns.

What The People Say
I knew I’d not get a lot of contributions this week due to Darrell’s limited exposure to a big audience. However, Mr Chris Sutton was good enough to write this for me about our man.

“His jackets can be sharp and bright but so is his brain. The man who blends everything together seamlessly. Darrell does light and shade with the very best of them. There is a time to laugh – and he can laugh at himself which many can’t – and a time to be deadly serious and cover the topics that others shirk away from.

“Once a lively scrum half, Darrell has to think quickly on his feet and he can roll with anyone. With his boyish good looks and smooth voice you may think, as I first did when working with him, he may just be a soft touch. I quickly came to realise to tread very cautiously after he put me back in my box. Sharp as a tack, a guy who loves being taken on as he is an encyclopedia of football knowledge. Darrell knows everything and there is a reason as he lives, eats and breathes football. A man who writes his own scripts, Darrell doesn’t do auto cue, which I think is pretty impressive in itself! His backing and passion for football and Scottish football in particular is second to none and he has carved out a lovely niche for himself as a lead presenter because of his desire, talent, work ethic and preparation. Darrell is one of the best out there and is a joy to work with. I could go on, but he may think I like him if I do!”

Isn’t that a great bit of writing? And a splendid testimony to a great talent.

Top commentator and broadcaster Darren Fletcher had this to say about our man:

“Great bloke, brilliant at his job, great sense of humour. Love working with him. Our Scottish football coverage is excellent and he’s a huge reason why. Loves his clobber too!”

Journalist Archie Rhind-Tutt got in touch to be equally complimentary:

“Darrell Currie is a top, top bloke. Will appreciate in particular him taking two hours of his afternoon for a coffee to help me understand the industry better and just to chat on a couple of occasions too. Talks to everyone on the same level. Great guy to work with on the occasions I’ve done so and to watch at work too.”

There were just a couple of other comments:

‘The fact that he makes it all look so easy shows just how talented this guy is. Mr Smooth. Often has to calm a rowdy panel on BT’s SPFL coverage. Knowledgeable, asks the searching and is on hand to join in with the light-hearted moments too.’

‘He was a few years below me in school. Cute kid – looked like he should be selling milky bars. Even at the age of 11, very confident, witty wee fella.’

Future Days
He’s branched out into doing English football and I’m sure, as he’s apparently London-based, he’d want to do higher-profile jobs. But if I was him, I’d rather be a big fish in a small pond and being the #1 Scottish football front man is certainly that. He’s done well to avoid declaring himself to be green or blue, which is forever an issue up here. That being said, after his work in Scotland, working with some of the more milky English pundits would seem like a breeze compared to stopping Kris Boyd going radge at the sight of a manager with a laptop.

Travelling the length and width of Scotland to cover football, from big 60,000 capacity grounds to much smaller crowds, has given him a tremendous breadth to his work and to his football knowledge. The great thing about football in Scotland is that it is massively unpretentious and totally embedded into local communities. Turning up at Hamilton Accies’ New Douglas Park to watch a Scottish Premiership game ensures that you have no arrogance or self-regard. It keeps your feet on the ground and this should serve Darrell very well, even if he does go down south more often. It invests grit and soul into a chap.

A native of the well-to-do part of Glasgow, Bearsden, this technically makes him quite posh and thus he can be understood by people in London. While we in Scotland don’t care a jot about that and would rather he was incomprehensible to non-natives, it does mean he can travel and viewers won’t wonder what the noise coming out of his mouth actually is.

For a young broadcaster, he’s already hugely experienced, so don’t be surprised to see his stellar talents used more frequently on ever bigger stages.