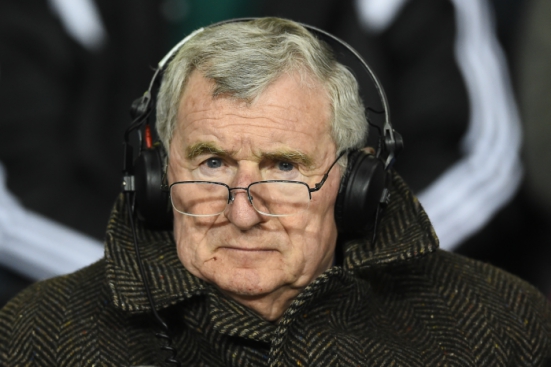 Johnny is dispensing affectionate, if platonic, loving hugs to the greats of football TV, radio and press. This week he’s waving at his radio as someone says, “hello, everyone”. That’ll be David Pleat, then.

Why the love?
Whether on TV or radio, as the presenter introduces Pleaty, the great man always has the great courtesy to say “hello everyone” or “hello to everyone at home”. Others have since followed his lead, but Pleaty has been doing it for years. It doesn’t sound like much, but it has always meant that we, the public, felt acknowledged and included. I am sure I’m not the only one who smiles, waves at the radio or TV and says something like “Hello Pleaty. Good to see you again.”

Always sounds so enthusiastic and excited to be at yet another game of football. And has an endearing ability to mispronounce names which has been well-documented. The mean-spirited feel he should know the names, but how can you not enjoy these:

Benayoun as some variant of Bennynoon.

And this is very funny:

Sometimes, I’ve wondered if he does it on purpose. I’d love him to deliberately slip in a malapropism. In fact, I’d just love to hear him say “malapropism.” It’d probably come out as as “plopmalapism.”

First came to prominence as manager of Luton Town when, having survived relegation in 1982, he did this magnificent gallop, which one never tires of seeing.

It’s the irresistible skipping and leaping like a young foal. It’s the lightweight, high viscose content suit in a shade that can only be called ‘Surgical Stocking’ and the matching shoes that look more like slippers. It’s the funny raising of the arms as though inhibited but still unable to control his joy. All marvelous.

Worked as a co-comm on ITV for many years. He was alongside Brian Moore for the Liverpool v Arsenal “it’s up for grabs now” game in 1989.

Superhero skills
Has an almost superhuman ability to recall the personal history of every player in every league, right down to non-league level. He knows who they play for, who they have previously played for, the positions played, their injury record. If on loan, he’ll know who their parent club is. Sometimes he’ll even know where a young player grew up, what his family are like and what his prospects are. And this isn’t just a UK thing for him; he has a worldwide knowledge of players. But it doesn’t stop there. He also knows everything about a club behind the scenes: the identity of the chairman, directors and owners, and I’ve even heard him talking about long-serving groundsmen. It really is quite extraordinary. To listen to him talk is to be both educated and entertained in equal measure in a way that is wholly unique.

But that’s not all. Pleaty has an unrivalled ability to construct sentences in an odd way, which sort of make sense, but are also laugh out loud funny. Such as:

“He is an interesting player – short back legs.”

“I feel like a drunken man who doesn’t have a drink.”

“He hits it into the corner of the net as straight as a nut.”

“Preki quite literally only has the one foot.”

“For such a small man Maradona gets great elevation on his balls.

“Stoichkov is pointing at the bench with his eyes.”

“He’s got a brain under his hair.”

“This is a real cat and carrot situation.”

“There’s Jermaine Defoe, checking the weather on his phone no doubt… he’s a lovely boy.”

“Marseille needed to score first, and that never looked likely once Liverpool had taken the lead.”

Style guru?
There’s something of the ex-teddy boy about David. Easy to imagine him strolling down Kings Road in ’57 in his drapes and crepe soles, nipping in to the 2 ‘i’s for a frothy coffee. Even now his hair looks has an echo of the DA about it.

And let’s hear it again for the 1982 beige suit: a creation that looked like a hostage to a massive stain from mister squirty during a hurried half-time comfort break.

These days, now 72, he loves some high quality, expensive clothes from a gentleman’s outfitters, probably run by an old chap with a measuring tape with a shiny brass tip. Jackets and coats are preferably made of a fine merino worsted and cashmere. Loves a mohair coat and a jacket with well-padded shoulders. Easy to imagine him on holiday in white slacks and a panama hat looking like our man in Havana, slightly pink in the face, sipping at a gin sling.

The boys like Pleaty, even if they are suspicious of anyone with an in-depth knowledge of anything, especially football. He’s an elder statesman who has been a player and a manager, so must be respected, but they’re worried he’s not totally on point with their chippy ‘England for the English’ (unless I’m managing a club) agenda. They love his creative way with a foreign name because, they’re like, they’re foreign, Jeff and no-one can speak foreign. Literally Jeff, no-one, and they’re all called something weird. They do it on purpose, I reckon.

And the adding of a ‘y’ to any name always makes a classic PFM nickname, so that keeps them happy too. Works for the BBC though, which they dislike due to their fierce belief in free market economics and a small state…and because you can get more money on middle-eastern broadcasters and corporations owned by right-wing nut jobs.

His appearance suggests he surely loves a glass or two of an expensive heavy duty Amarone and might possibly entertain a sip of Reidy’s seagull and owl pellet brandy.

But they worry that Pleaty knows too much; too much about football and too much about them. They know he knows they’re a bit rubbish and they’re worried he might tell someone. So they will nod and agree with him then will try and memorise what he’d said in order to pass it off as their own intelligence.

What the people say
It is safe to see David has many, many fans.

The estimable Mark Chapman of 5 live and Match of the Day fame got in touch with me to say this:

“I can’t begin to tell you how much I love Pleaty. From the good morning/afternoon/evening everybody to his pronunciations to his mischievous sense of humour. He is a joy. But here’s the most important thing: he watches more football than anybody I know. I ask him about a European footballer; he knows about him. A lad in League One, he knows about him. And that isn’t because he has watched a highlights clip on YouTube. He has properly watched them. I hate the phrase ‘proper football man’ but he is. I always put him, Graham Taylor and Jimmy Armfield in that group who I respect, admire, love spending time with and feel lucky to have worked with. His notes are hilarious. I don’t think anyone else could read them. We were at Sutton this year for an FA Cup game and Brentford’s Scott Hogan was being linked with West Ham. I asked him what he knew of him and he reeled off strengths, weaknesses, former clubs etc. Remarkable. He is perfect to be stuck on a long journey with!”

“He is a walking footballing encyclopedia but always has the grace to listen to others. The man is a gentleman.”

And I think those two comments are the perfect summation of why we all love him. Social media feedback was wholly positive and warm.

‘A loveable football anorak. His enthusiasm and knowledge of the game is infinitely more appealing than those who just seek controversy.’

‘I loved his “good evening everyone”. He also has a fantastic knowledge of the game at all levels.’

‘Sorely missed on ITV. His mispronunciations were a thing of joy.’

‘”Good evening everyone” could put a warm smile on anyone’s face.’

‘Owner of the greatest suit in football history.’

‘As enthusiastic as he is incapable of pronouncing foreign names.’

‘As a Luton fan, I bloody love him. Encyclopedic knowledge, warm, descriptive. Dancer. Looks like an Owl.’

‘The ultimate PFM in beige slacks.’

‘Just a lovely man, always think he has a pocket full of Werthers Originals when commentating.’

‘Likeable, knowledgeable…..would love to have shared a table with him, Graham Taylor and Jimmy Armfield

‘Great regular contributor to the brilliant Monday Night Club on @5liveSport. Seems to know everything about everything! #thedon.’

‘Excellent reader of the game. Seems to genuinely love watching games and the tactical exchanges within. Always says “good evening everyone”.’

‘When you hear his voice on the radio you smile. You can’t help it. In a world where much anger is seen he is a calm oasis of wonderfulness.’

‘Had Wikipedia in his brain before it was a thing. Always with context though, which is important.’

‘Well-informed while being pleasant. Brilliant in UCL commentary in the mid-90s. Knowledgeable about the opponents of English teams too.’

‘We want our pundits/co-comms to understand the game, know about the players and explain the tactics, what is being used and why. David Pleat does all of these and to a lot higher standard than almost every other pundit/co-commentator.’

Future days
It often sounds as though David goes to watch football on pretty much any and every day he can. He’s still involved in scouting (Dele Alli to Spurs was his idea) and seems utterly addicted to the game.

One imagines him with Mrs Pleaty on holiday in Papua New Guinea. He gets the local paper and finds that Madang are playing Lae City Dwellers. His brain begins to whirr as he pulls out information about the clubs.

“They’re a new club, Lae City, and champions of the PNG National Soccer League for the last two years, after eight consecutive title wins for Hekari United. Impressive. They play in the Sir Ignatius Kilage Stadium, of course, nice little ground, 5,000 capacity. Head coach Peter Gunemba has done a marvelous job there. Raymond Gunemba, the number 7, is the man to look out for. Top scorer at the 2016 OFC Nations Cup and has a wealth of experience at this level, having played for three years at Hekari, of course. Should be a good game, this one, Mark.”

“Mark’s not here, luv,” says Mrs Pleaty, shaking her head while making him a flask of tea for half time.