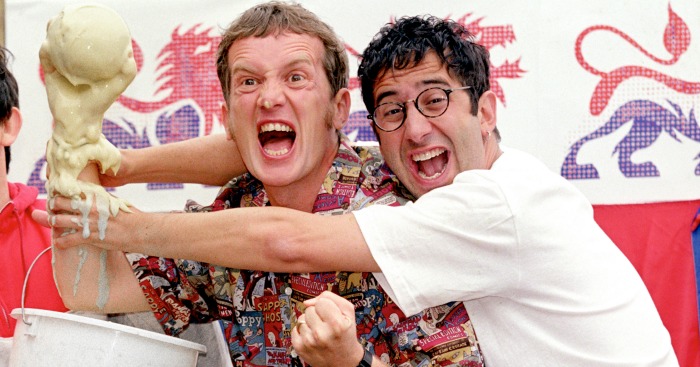 This week, Johnny has put on his pyjamas to say a big HELLO! again to Baddiel and Skinner’s Fantasy Football League…

Why the love?
Incredibly, for a programme which feels like it was fixture on TV for the whole decade, FFL only ran for three seasons, starting in January 1994 and ending May 1996. While there were specials for Euros and World Cups, those mere 30 months are the legacy that we all recall so vividly. At just 30 minutes long, it never outstayed its welcome and always occupied an ideal post-pub slot.

Back in 1994 the idea of having an entertainment show based around football was entirely new. No-one had done it before on the TV. Easy to forget now that it actually had a Fantasy Football League element to it for most of the run, with guests picking teams and so forth and a league table being shown of all the points scored. As it seemed less and less important and more irrelevent to the fun, this was phased out and then abandoned altogether in favour of more clips, jokes and silliness.

The fact two talented comedians who were used to performing in front of a live audience were fronting it and not ex-players or BBC presenters felt really new and different. For all they were successful comedians, they seemed like us. They reflected ourselves and how daft we are about football. It was the first show to really play on how football’s value is as much, if not more, about the culture around it, rather than purely the game itself.

Looking back on it now, it was laddish but not quite in the boorish, aggressive, modern #bantz way. Surprisingly in some ways, it was not really sexist. The very fact that they even invited women such as Sue Johnston, Lorraine Kelly and Jo Brand onto the show at all was regarded as radical at the time. It was friendly, but not mushy, or overly matey. It felt sincere, had intelligence behind it, and didn’t simply try and appeal to the lowest common denominator with its comedy, though it wasn’t above base humour, obviously. It also allowed people from the world of football to talk about the game and have a bit of a laugh in an informal way. The chemistry between David Baddiel and Frank Skinner was always one of good friends who were relaxed in each other’s company and that was really at the core of the show’s success.

Perhaps above all else, it felt inclusive and welcoming, like visiting old friends to have a chortle about the absurdities of life and football. Many have since tried to emulate it, in one way or another, but just never seem to come close. The fact it also appeared to be run on a shoestring budget meant they had to improvise and make the most out of not much.

It’s loved to this day because it laughed at football the way we all did and no-one had done that before them.

Superhero skills
Guests were allowed to smoke and drink on the show, which seems almost unbelievable now, though I don’t remember it being an issue at the time.

There was any number of silly little sketches such as this

But perhaps Phoenix From The Flames is the feature most people remember. There are lots to choose form but I always enjoyed the Gerry Francis one.

Hard to believe that is over 21 years old, isn’t it?

If you watch a whole show, the presentation style and humour is exactly what we’ve come to expect today, even if the sight of Jo Brand and Nick Hancock with a fag on isn’t. Stylistically it has become almost a default but at the time, it really looked different

The show didn’t have any major bad press but there was the whole Jason Lee pineapple thing, of course. Maybe that was a lesson in how a popular joke on TV can inadvertently turn into something more cruel and tortuous.

In some clips you get to see outtakes and what’s interesting is there appears to be not one ounce of difference between the lads’ on-screen attitude and when the cameras stop rolling. It’s that degree of naturalness that gave the programme its warmth.

Style guru?
Statto always seemed to suit being in pyjamas and a dressing gown, David and Frank just wore what we might call normal clothes. And that was it. Informality was everything.

More striking is how, when you watch the clips of contemporary footballers, they simply look physically very different and certainly far less like today’s middle-distance athletes. Also, because the really big money hadn’t really spread its tentacles over the industry, players seem far more down to earth and relatable.

This is a tricky situation for yer PFM because it dates back to the good old days when men were men and so were the women and that’s how the boys liked it. But alternative comedy still scares them, as does anyone who is educated. But it is about football, which is good, and they had a sofa on which you could sit and squeeze a leg, also good. But then why is the specky lad in a dressing gown? Makes no sense. Then again, they allow drinking and smoking, which we should all be allowed to do on the telly, Jeff. And there is a lot of garish sportswear on display which the boys love and insist on having their initials ironed onto all of it.

Frank is a recovering alcoholic too, which the boys really don’t want to be associated with, thinking as they do that you’ve only got a drinking problem if you can’t get your hands on some drink.

Then again they might well show a clip of someone kicking the ball into their own face, which is brilliant and will keep any Proper Football Man laughing in an overly loud manner for literally hours, Jeff.

But when you watch any of the boys that appeared on the show, most of them have a look of slight fear in their eyes, especially in the early shows. The fear that only a PFM has when he leaves the weirdly closed world of football and has to try and pass himself off as a normal human being.

What the people say
It’s always tricky reviewing a show that is over 20 years old. Attitudes change and old shows can be unfairly criticised for not meeting contemporary mores, especially when it comes to matters of race, sexuality and gender. While I don’t discount there being a few such examples on FFL, looking at a lot of clips now and actually it stands up to 2017 scrutiny very well.

The programme formed such an important part of so many people’s growing up that it wasn’t surprising that I had a lot of comments. Collectively they sum up exactly what was so good about the show.

‘Essential viewing for teenage me.  Phoenix from the flames, Statto and Jeff Astle were bloody brilliant.’

‘Essential viewing between flicking over to channel 4 for the rude bits on The Word & Eurotrash.’

‘Two blokes with a genuine love of the game who also appreciated how ridiculous it all is. Banter before the LADZ came along & ruined it.’

‘I loved the Archie Gemmill Phoenix from the Flames. Portraying Johnny Rep as a guy in a suit and tie in a Vauxhall Cavalier.’

‘Brilliantly funny. Lad banter before the term was high-jacked by knobends. Set the tone for a generation.’

‘Laddish but fun and erudite without being crude or boorish.’

‘Once spoke to the late, lovely, Jack Taylor about his ‘Phoenix From The Flames’. He loved the segment & show. 1st genuinely funny footy show.’

‘Loved that they had Damon from Blur on. As a teenager, it reassured me I could love both music and football; I didn’t have to ‘pick a side’.’

‘It had some genius moments.’

‘The segments with Willie Thorne were TV gold.’

‘At the end of the season, Frank echoing our thoughts and bemoaning the fact that Grandstand would only be showing swimming and the like.’

‘The WC98 episode with Noel Gallagher and Ian Broudie. Gallagher during his peak cocaine phase. Most 90’s thing ever.’

‘As a 13 year old, BBC2 @ 11.15pm on Friday nights were the highlight of my week. Intelligent humour for the most part.’

‘Great memories..watching this with my late pop and saying HELLO!!!! Together. legend of a show.’

‘My intro to: the marvellous genre of football comedy, fans/non-football celebs having their say, and a statistician in his pjs on the telly.’

‘Subsequent shows and websites have proved it’s really, really hard to combine a love of football and laughing at how silly it is.’

‘Baddiel telling Brigitte Nielsen to sit down and stop being a tw*t was a highlight amongst 1000s of highlights.’

‘It was just perfect and hasn’t been equaled since.’

‘Genius show. Seemed like your mates had somehow managed to get on the Telly.’

‘Two funny, witty people that seemed to love the game. I adored the show, but fear it’s partly responsible for inflicting Tim Lovejoy on us.’

‘Amazing show, which formed part of the zeitgeist which pushed football alongside the re emergence of indie music to the mainstream.’

‘One of my all time favourite TV programmes. Just brilliant. Poor imitations since.’

‘The first show to properly mix humour and football. It was during 90s lad culture but wasn’t too laddish.’

‘It was also the first show my uncle and I really enjoyed together.’

‘Very much of its time. I doubt football broadcasters would allow it today, the game’s become far too serious.’

Future days
Although there are periodic calls for its return, they’re right to not bother. In the same way you can’t return to an old lover and expect things to be as they once were when you were in your youth and the flame burnt hottest. Things exist within a certain context and come out of the culture at that time. FFL came along at just the right moment, flew high and burned bright for a short time, but its time has now passed.

Football takes itself very seriously these days and football media equally so. The game loves itself far too much and is extremely suspicious of having the pish taken out of it. Looking back now, it is easy to see how it has subsumed some of its humanity in favour of financial reward and the divorce from reality that brings. Back in 1994 footballers still looked like people who you lived around.

So FFL is specific to the era that spurned it. It leaves a legacy that all concerned can be proud of.