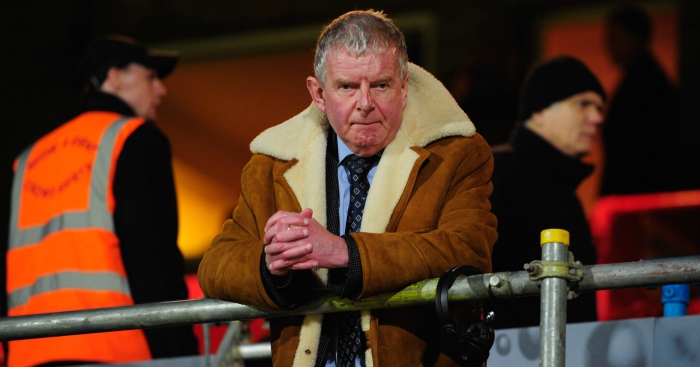 Johnny is celebrating great people in football TV, radio and print. This week he oozes his love all over a huge sheepskin coat. That’ll be John Motson, who is delivering his final live BBC commentary this weekend.

Why the love?
A little-known fact about John is that he’s actually a Mancunian by birth, is the son of a Methodist minister and was privately educated at Culford School near Bury St Edmunds.

You would have to be born before 1968 to have been alive when he wasn’t on the radio or TV. He’s been on Match of the Day since 1971! But unlike fellow comms legend Barry Davies, he’s pretty much only covered football. So he’s not just part of the furniture, he’s part of the warp and weft of BBC football coverage and is, in some ways, part of its DNA and thus in all of our football media DNA.

Along with Barry and a few others, he all but invented the art of TV commentary. His preparation of various facts and figures predated the now commonplace reliance on in-game statistics. So many great moments of high drama in football have come complete with a Motty “Oh I say!” or a “Danger here!” or merely that unique Motson noise which comes out of him at several different frequencies simultaneously and can be best characterised as wheezy bellowing.

He’s commentated on around 2,000 games and has been present at 40 years’ worth of tournaments, a witness to so much football history and legend. When Tardelli scored THAT goal, who was on the mic? Of course…

Long-serving performers fall in and out of fashion but eventually get beyond that and become legendary and that’s very much the trajectory Motty has followed. Indeed, he’s the only commentator to be known by his nickname. Motty, is a brand, as much as a person, these days. Although he hasn’t done live football for some time, his is a comfortable, reassuring presence and he seems to have retained his passion for the game, even now at 71 years young.

He’s been present at some of the great moments in football, perhaps none more so than here. It’s worth considering that when this goal went in, he and Trevor Brooking were leaping around amidst total mayhem. Also, you can never see this goal too much.

Superhero skills
A fan of the “that’s the third time this season a player with a ‘Z’ in his name has been sent off for a club located within 20 miles of the M62, whose wife is called Gladys,” school of statistics.

He was a bit of a pioneer in having those sort of numbers to hand. Interestingly, these days, I’ve heard him be somewhat sceptical at the expansion of stats into an artform, rightly wondering who is checking the veracity of the stat collectors. “How do you define a sprint, and, heh heh..by the way, we’ll get into this later, I know, but really, you’ve got to wonder, heh heh, who is in the stands measuring this sort of thing, Mark? Does he have ruler or is at all laptops these days?”

You can’t fake enthusiasm for long in broadcasting and Motty does still seem to retain a genuine enthusiasm for the game of Association Football. There is a boyish charm to what he does, his voice still prone to going into a high squeak or breaking into laughter at moments of high dudgeon.

If he’s on 5 live’s Monday Night Club it’s always a pleasure to hear him launch off at a tangent, mid-sentence, make an aside to an aside, as ideas drop into the forefront of his consciousness. It goes something like this:

“Incidentally…you can say what you like about Wenger…and people will, I know we’ll be …but really, when you go back all the way to Bertie Mee, who incidentally wasn’t the first to…y’know…you’ve got to consider these things, but in these days of, heh heh, mobiles and everything is mobile these days, I’m not a computer, Mark. It’s hard to keep up and before you know it, and it wasn’t always like this, it’s all got out of hand.”

When in tandem with Mark Lawrenson, his puppyish enthusiasm is balanced out by the Lawro cynicism in a perfect double-act. When working on the radio, especially on the MNC, he often develops an excitable tone, the way some of us do after a couple of drinks, and this makes for very good listening.

Has that rather endearing habit that all older people develop of thinking things that were a long time ago now, are in fact quite recent. “These days, Mark, with three points for a win, my goodness, things can change very quickly, y’know.”

In recent years there’s been a vague whiff of unrest at all the foreigns coming over here and stopping Tim Sherwood getting a job, and one feels that one would not have to scratch the surface too far in order to release some Ukippery vibes. “Nothing wrong with a healthy debate, by the way.”

Style guru?
It’s a little-known fact that there is a sheep farm on the fells of Cumbria dedicated to growing animals that will eventually be made into Motty’s coats. It was this moment which really made the coat iconic. Look at how thick it is! And he appears to be wearing a sheepskin cap. Class. For younger readers, this is what the 70s and 80s looked like from November to April every year.

It’s odd that you can use a coat to brand yourself but John has done it. Look at this one. 427 sheep died to make this which, you’d have to believe, has been made in the spirit of parody.

Reidy, son, c’mon, Motty’s got a thirst on. What’s this? Spent nuclear waste, drain unblocker and fermented pickled beetroot vodka? That’ll go down well. Nothing foreign about that.

The PFM is a big Motty fan. Great nickname, Motty. Simple. Effective. Ends in a Y. Yer PFM loves an animal skin coat, feeling it puts him in touch with his Iron John inner hunter gatherer, fending off wild dogs in the Carpathian mountains.

Has interviewed all the PFM favourites from Shanks, to Cloughie, Harry Bassett, John Beck and Big Ron, and he never gave no-one no lip. You didn’t have to worry about Motty trying to get all Paxman on your hairy ass. He’ll ask his questions, nod and then feck off. Which is how they like it.

Willing to talk glowingly about the glory days of the game which, as all PFMs know, is any time in the past.

Seems very prepared to go the extra mile with the boys on the red wine and possibly a flutter or two at the casino, even if the attentions of Miss Well-Tanned Suede Body of 1976 would have no appeal to a man whose wife still helps him do his pre-game research by keeping copious notebooks of scores and results. That’s a proper football woman.

There’s nothing any PFM would want more than to be caught up in a post-nightclub brawl which was being commentated on by Motty.

What the people say
While perhaps not held in quite the same universal lofty esteem as long-time colleague and friend, Barry Davies, Motty has many fans for whom his voice has all but defined their upbringing and it is hard not to feel great affection towards him for that reason.

‘A comforting, nostalgia-inducing voice, but weirdly PFM in his views on foreigns. That said, the official soundtrack to many a youth.’

‘A man not to argue with unless you’ve swotted up using your latest Rothman’s Yearbook.’

‘Warmed to him a lot more having heard him on the Monday Night Club.’

‘He loves football and knows loads about it. His Monday Night Club appearances are a reason you want a commentators-only discussion show.’

‘Not my favourite commentator but good pundit, so knowledgeable. Once nonchalantly beat Shaun Wallace (The Chase) on FA Cup trivia on F-Focus.’

‘His enthusiasm hasn’t dimmed after all these years. Always struck me as a great, genuine guy who was just pleased to be around the game.’

‘Motty is an institution, no doubt.’

‘More excitable than most but maintains a boyish love of the game. And his coats are the stuff of legend.’

‘Sheer enthusiasm and love of the game you can’t help but smile at.’

‘Actually never much liked him as a commentator- a monotonous drone, compared with say the great Barry. Much prefer him as a contributor.’

‘Classic piece of commentary during 1986 World Cup Eng v Paraguay “Delgado. He has a beard.”‘

‘Motty is a lovable loony. The endearing thing is he clearly undoubtedly loves football.  And he’s been to all the big occasions we’d love to.’

‘Ohhhh! That is absolutely phenomenal!’

‘Would it be complete sacrilege to say I didn’t really like him?  Never really “got” his popularity.’

‘He is the once entertaining but now eccentric old uncle, invited on Boxing Day out of duty, that just doesn’t know when to leave & go home.’

‘Oh! Everything is a surprise to him. It’s exhausting.’

‘His commentary on the France vs Portugal 1984 Euro semi-final is possibly the greatest of all time.’

‘An enthusiastic, eager-to-please terrier of the commentating world. Rather lacks the gravitas of other older commentators & co-commentators.’

‘Genuine expert on the game and one of the commentary greats. Underappreciated by some because of his quirks. Nice to hear him on MotD still.’

‘Owner of the most iconic coat since Del Boy.’

‘One of the most iconic voices of this generation.’

‘Has been commentating since around the time of Henry the 8th. Should always be pictured in a sheepskin coat.’

‘He just loves football – all football from non league to the World Cup final very simply but oh so deeply.’

‘The Wenger of commentators.’

‘He was an “the voice” for a while, but as his role diminished he became a self parody – Motson imitating Rory Bremner imitating Motson.’

‘The unequivocal voice of football for me. His work diminished but his influence never did. Greatest of all time.’

Future days
There are those who feel that his powers are waning a little, and that he occasionally struggles to match the standards he set himself for so many years. Rumours are that he’s got one more season of MOTD commentating to go before putting the old sheepskin coat out to pasture. One would hope he will continue to contribute to football radio and gets a more regular role on 5 live shows. We need older people to be involved in day-to-day football because they bring a unique perspective and knowledge. Besides, who else will shout “Oh I say!” when he’s gone?