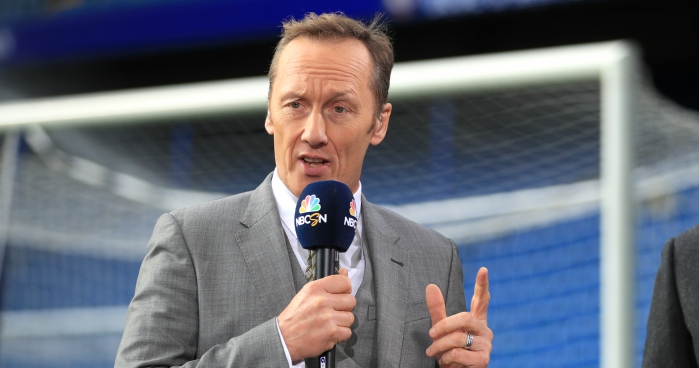 Johnny’s letter this week is to an Arsenal legend, restaurateur and quality pundit. That’ll be Lee Dixon, then…

Why the love?
Put simply, he seems such a nice, well-brought up, polite fella with nothing harsh or vulgar about him. In a cold world, this should not be underestimated.

A Mancunian lad, he has one of those Lancastrian accents that suggests a plain, rather sensible firmness of mind, but without any of the annoying “you know what I mean” Gallagher-style passive-aggressive verbal ticks and drones.

Worked his way from Burnley, Bury, Chester, Stoke and finally to Arsenal where he played 458 games and became a veritable legend of the club as part of an indefatigable, impenetrable defence with Nigel Winterburn, Tony Adams, Steve Bould and Martin Keown, one of the greatest in modern football. A fixture in his right-back position for the better part of ten years, while the centre-halves tended to attract all the attention, Dixon quietly got on being really bloody great, week in week out. Remarkably, he played on until he was 38, ending by winning the double and finishing with a Championship medal in three different decades. What a career! Oh yeah and on top of that he won 22 England caps, the big show off.

A big fan of fine wine, food and cooking, after retiring, he got involved with a chain of Indian restaurants in the Midlands called Shimla Pink, which sounds like a new Dulux shade or the name of a strip club in Las Vegas. Later he invested in friend Heston Blumenthal’s place in the well-named village of Bray.

Started his punditry career on the BBC in the mid-2000s back when it wasn’t nearly as good as it is today. Lee talking about Marek Hamsik and Alan Hansen looking on with an astonished sneer, saying “someone’s gie ye him” presumably because no-one could possibly independently do some research about a promising young Slovakian, is a memorable nadir.

In amongst the smouldering rubble of those days, Lee was obviously the future and was setting higher standards that have now become the norm, so it was a huge disappointment when he left for ITV in 2012 in order to cover more live football.

Works for NBC in USA on Premier League coverage, alongside Graeme LeSaux and Arlo White, who is a fine-ex-5-live broadcaster named after the great Arlo Guthrie. Surely Lee should go into a some sort of food venture with him called Alice’s Restaurant?

Superhero skills
Must have had some real inner steel to survive and thrive in an Arsenal side that was full of what we might euphemistically call ‘characters’ and what was actually people with serious personal issues.

What has made Lee so good as a pundit is actually that which has become the norm. That is doing work, being articulate, not resorting to group-think or cliche. In short, just being intelligent without being aloof, not resorting to shouting, repetition or overbearing gurning.

ITV is a tough gig because of the fundamentally disruptive nature of the ad breaks. Inevitably your work becomes fragmented and there is little room for you to expand at any length on your ideas and observations.

Dixon is especially pin-sharp on defensive positioning and, as one of the brightest boys in the class, isn’t worried to discuss the more cerebral and emotional elements of the game. He also has a nice, unhurried way with words and that makes him a very good storyteller. His anecdotes of his Arsenal days, in what was by any standards an extraordinary group of people, are always entertaining.

This year has been involved as Executive Producer in Amy Lawrence’s “89” movie about Arsenal’s title win. And blimey, it looks good. Given the context of that season, with Hillsborough fresh in the memory, it looks like they’ve brought something new to it. Plus Lee has a nice little blue scarf on which I’d rather like. And how great does George Graham look for a 72-year-old man? Looks dressed for a new Milk Tray advert.

Dixon was on a very good Monday Night Club this week talking about making the film with a lovely mix of quiet emotion and thoughtfulness, especially about how he took a bouquet of flowers to the Kop before the game and released so much tension and emotion in doing so. Ian Wright’s input to this story is so good too, especially in relation to David Rocastle. Do watch it here – if you’re not a MNC listener, this is the sort of grown-up gold that you’re missing every week.

Also, if that isn’t enough, he’s probably the only pundit who could whip you up a delicious dinner of skate wings and cauliflower puree and know a decent wine to go with it. If he only had a decent vinyl record collection, I would happily marry him.

Style guru?
Never one for the Nehru-collared jacket, or the sort of clothes that you’d have to ditch after one season for being out of fashion. That being said he’s always well-turned out and it’s hard to imagine him in any massive crime against clothing aesthetics. Is obviously always fighting the Tintin tendency but that’s now a reference so arcane that at least 75% of our readers won’t even know what I’m talking about.

With high cheekbones, Dixon looks a young 53 and benefits from the fact that he’s always had a substantial forehead and thus the ravages of time on a chap’s follicles seem less pronounced into middle-age. Does a lot of cycling and maintains the enviable trim physique of the ex-pro, especially considering his easy access to fine dining.

What the people say
– He was on MNC this week, mostly to talk about his film, but ended by giving a new and interesting perspective on Arsenal. He’s a great storyteller and an excellent pundit too. (colleague Kelly Cates)

– He is a truly lovely man. Not only does he read the game beautifully but he once let me stay at his house at very short notice. I bought his wife a punnet of raspberries as a thank you. He convinced her that I wasn’t a complete idiot. Class. He’s a diamond. He’s kind, friendly, caring, funny and always asks people about them in a world of self-obsession. I think I might love him. (colleague Dan Walker)

– On NBC comms the other day he went off on one about the phrase ‘controlling the tempo of the game’ – he seemed quite angry about it too, like it was some wishy-washy term with no meaning.

– Lee is as a commentator as he was a player. No nonsense, intelligent and disciplined with the odd pass going astray. Makes both look a lot easier than they are.

– Another who has grown into the role very well. Concise and very clear when making his point. I’m a huge fan. Another who has stepped his game up with the increased spotlight on pundits recently, and what they offer. Comes across as a nice chap, too.

– I think he’s great – down to earth without being thick on purpose, insightful without just resorting to meaningless ‘3 in the last 7’ type stats everywhere.

– Seems a refreshingly normal, clever bloke too – refreshing when some pundits clearly love the sound of their own voice yet contribute nothing.

– He loves his dogs more than anything in the world, and that in itself makes him great. Proper Barnes boy now.

– TV wise, wasted on itv where he only ever gets a couple of minutes due to ads. Was better suited to BBC.

– Scored the greatest own goal in history against Coventry

– Would like to see him on Monday night football

– By far and away ITV’s best pundit.

– A bloody brilliant full back and analyst.

– Criminally underused. Seems to be one of the rare breed who Roy Keane doesn’t treat with absolute contempt.

– I’m biased as an Arsenal fan but I’ve always liked him. He’s articulate & always fair. Makes up a good pairing with Keane.

– He scored an overhead kick for Stoke against Leeds in 1986. So he must talk a lot of sense

– Possibly wasted on ITV but while we’re forced to watch international games there, I’m glad he’s part of the team. The standard would be much lower without him.

– Seems like he actually knows his stuff and would rather talk sense than football cliches.

– Intelligent and insightful. Also very underrated. Top dog on ITV but would be interesting to see him ply his trade on Sky or MOTD

– Brutal direct and honest to a fact. Understated defender who should have played more for England. His own goal from outside the 18 yard box was quality!

– As a Spurs fan I was conditioned to hate that George Graham Arsenal team, and they were easy to dislike, Lee among them. However, I can’t help liking him on TV now. Funny, self-effacing & knowledgeable. Not afraid to speak his mind.

– He took the lofty, bullying superiority of Alan Hansen and Mark Lawrenson so well. While respectfully bowing to their TV experience, he probably suspected his insight and talent for punditry was far better than theirs, but kept it in. He was right. Now deservedly ITV’s main man.

– He and LeSaux (also great) are our pundits on NBC. He’s always willing to give @arlowhite a bit of entertaining stick.

– His punditry and commentary for NBCSN in the US is always spot on and informative. Not afraid to call people out and doesn’t mince his words.

– Would love to see more of him on Monday Night Football, The Saturday Night Show or MOTD2 Extra. Just seems primed for more lengthy football debate than ITV can offer.

– Had a dream he was Prime Minister once. Life has seldom reached such highs.

– Thoughtful, sensible, intelligent and can praise or criticise without over-egging it. Is forming an entertaining “good cop, bad cop” duo with Roy Keane on ITV’s Champions League coverage.

– Erudite, insightful and humble. There’s no grandstanding, in fact he gives off the impression that he relishes being part of a team and always seeks to elevate those around him. What makes that all the better is he could have gone the other way.

– I didn’t like him until he confirmed to me that after he clattered Giggs (deliberately) in THAT ‘99 cup semi final where Giggs scored THAT goal, after the final whistle he did, in the midst of danger and chaos caused by Giggs being mobbed by United fans, go over and apologise.

Future Days
One of the great things about having quality people like Lee in our media universe is that whatever they choose to do is likely to be of interest. From a selfish point of view, I wish he’d come home to the BBC and especially to 5live. He’s been gone too long.

Dixon has a warm, friendly timbre to his voice that is perfect for radio on dark nights and cold days. Is surely set to be a top performer for years to come.