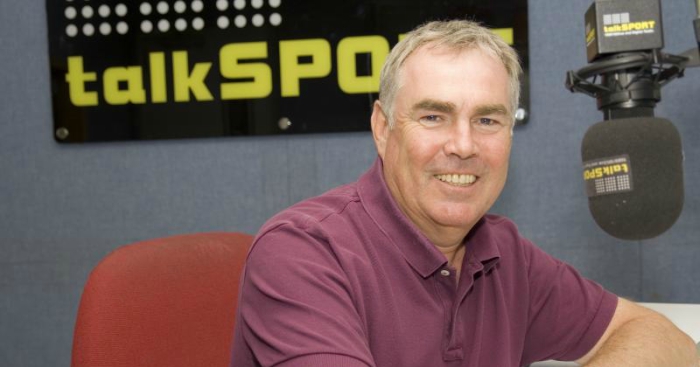 Why the love?
One of the few radio presenters who have not made the leap to TV at any point and seems dedicated to the superior, only-for-ears art form. Like so many great broadcasters, he started in local radio – in his case, on BBC Radio Cambridgeshire. He worked on Sky too and did a good eight years on 5 live which is where I first remember hearing him from 2001 to 2009, at which point his contract wasn’t renewed.

Back then, there was a lot of talk of a fall out with Alan Green. Maybe it was overblown; it’s hard to tell as every reference to it seems to be a word-for-word regurgitation of the same article. Also after publishing this rumour, the Telegraph were forced to issue an apology to Greeny, which rather suggests they couldn’t make it stand up.

In the Mail, Charlie Sale alleged: “The breakdown dates back to the Champions League final in Moscow last May, when Green, worried about his safety among Manchester United fans, was furious Saggers didn’t leave Sir Alex Ferguson’s post-match press conference to escort him to 5 Live’s transport 150 yards away.” But we could be forgiven for not trusting anything in the Mail to be the whole truth. Quite the opposite, if anything.

Anyway, for whatever reason his contract wasn’t renewed, and it allowed him to swim in some new water at talkSPORT where he has remained ever since.

One of those media types who, outside of the studio, lives a pretty anonymous life and seems to not entertain any trappings of fame and fortune. Not spotted on a red carpet or larging it in a gold and diamond hotel in Dubai.

Superhero skills
Appears to be native of Cambridgeshire, but he doesn’t have any discernible accent. What would a Cambridge accent sound like, I wonder?

Can do an especially rapier-like rant in moments of high drama. His two minutes after England’s exit to Iceland is right up there with the best, when he rips through the players and manager. If you’ve not heard this before, you’ll enjoy it.

However, his greatest contribution to broadcast media has to be this sweary 59 seconds. Mag-nif-i-cent.

Ironically, much of the time, he has a pleasingly low, late night, oaky, whisky-drenched sort of voice, which can be relaxing and very aurally comforting when in a long discussion. In a role often occupied by 30- and 40-somethings, he’s in his late 50s and thus is good at voicing the longer view when needed, as someone who remembers when football was very different to how it is now. This is important because all generations need to be included in discussions and not just those of passing fads or fashions.

He used to do a thing on Mondays, the rather awkwardly titled ‘Feist Night’ with Stan Collymore which Stan, for some reason, seemed to think was best appreciated whilst having a bath, as he kept tagging it with “run that bath”. I’ll resist a dirty joke. But despite Sagg’s ability to dish out some stick when confronted with an especially egregious situation, I’ve always felt the more argumentative tone wasn’t his comfort zone and even though he can sometimes paint with a big brush which has been dipped into an enjoyable pot of “the games gone”, he’s actually a very considered performer, especially by the standards of some talkSPORT workers.

Indeed, at times he has had to be ringmaster to some of the more noisy old-school pundits and thus has to guide the discussions away from the hive-mind default thinking that some ex-players mainline, and that can’t be the easiest job.

He doesn’t always adopt the easiest positions and I like that he likes Gareth Southgate’s calm manner, a manner which in some ways is at odds with the talkSPORT default.

Recently, when the abuse stories broke earlier this season, the grown-up and sensitive way he dealt with it on Kick Off was exemplary. It’s such a tricky thing to discuss in a public forum because you have to get the language right to reflect the victims’ experiences and yet stay on the right side of preset broadcasting standards. This showed his long experience and intuition in a very good light.

Style guru?
You’ll know Mark’s name because he’s been around so long, but I’d wager you might have absolutely no idea what he looks like and even though he’s been in my football life for so long, I didn’t either.

Research reveals a robust-looking silver fox who favours menswear of a similar robust format. You might get a striped shirt but that’s about as extravagant as it gets. Seems likely to own the sort of green quilted jacket that is favoured by rural folk. Very much from the clothes-to-keep-warm-and-hide-your-body school of dressing which many of us find the only sane route to take through life.

One of the most incongruous photos I found was of him on a boat with Paris Hilton, which is two separate universes that really shouldn’t be able to exist together.

What the people say
I was surprised how few members of the public got in touch to talk about Mark. talkSPORT is hardly an obscure station and it gets good listener numbers, but perhaps somehow he goes under the radar a little, just because he doesn’t try to be a big personality. He also doesn’t disclose much of his cultural hinterland outside of playing a bit of cricket, so he doesn’t live in the public mind outside of his time on the airwaves. That being said, he does have plenty who appreciate what he does and those who have worked with him are also big fans.

Sal Ahmad got in touch to say the following:

“As his producer on talkSPORT, I have to say he is one of the most hardest-working broadcasters I have worked with. He prepares so well and in the course of a week, we can do five completely different shows and he will comfortably be able to adapt and bring out the best from guests. Works so hard, but on a big story or a big game, he is the man who you want. We’ve done three shows this week, all different and with such a variety of guests and topics, and all sounded so damn good. Wants the show to be the best it can be at all times and expects a lot of the production team and will never let anybody down on air. From Arlo White and Peter Drury on Tuesday, Judge Jules, Dom Hutchinson and Kriss Akabusi on Wednesday and last night’s look at Dutch football and England as well as the various three-hour special shows on drugs in sport, Russia, abuse and much, much more. Pleasure to work alongside him.”

“Saggs is brilliant to work with. Honest and straight to the point and gets the best out of people he shares the airwaves with. Been a huge help to me and always great for advice,” said Danny Higginbotham.

“In a way, Mark (although almost nobody calls him that, it’s always Saggs or Saggers) is a broadcasting chameleon, going from the BBC to Sky News and then to talkSPORT, and fitting in perfectly at all of them. He’s a bit of a maverick, and almost always never follows the company line, which I think is great. He’s certainly never afraid to voice his opinion, which can often be vehemently expressed, and although there does seem to be a bit of a persona act at times, there are many occasions when the discussion evening programmes he hosts could easily sit on Radio 5 or even Radio 4. He is a bit Marmite, in that probably you either think he’s great or awful, but he’s never vanilla.”

“At his absolute furious best when off air discussing the failings of public transport,” noted Max Rushden.

Writer and journalist Michael Calvin said: “Saggs is unashamedly old school, an impeccably prepared pro whose line of questioning skewers the ignorant and the arrogant. He’s great to work with on his evening show because he has the time and inclination to interrogate the issues without fear or favour. Bit of a curry fiend but a top bloke. The sort of guy you could put in any situation and he’d do the job.”

‘The way Saggers handled the abuse subject when the story broke was exemplary. All of his shows that covered it were done in a tone that only a very good broadcaster could convey. His rants are bloody good as well!’

‘Not a talkSPORT listener but he was a superb presenter back in the day on 5 live – always thought he could have transitioned to TV.’

‘His rants when England lose rival only those of Chris Waddle.’

‘Reportedly criminally ousted from 5 live because he fell out with a certain Mr Green. He was particularly good presenting the big live events on Radio 5 and always asks the right question. Closest the BBC had to a replacement for Des Lynam.’

‘I really like Saggs – often has to mediate two blustery pundits at a time, and manages to remain composed. Really strong anchor, and also match presenter.’

‘In a league of his own when teeing up a wet and windy cup replay between two teams you’ve never watched and leaves you thinking, ‘I can’t miss this game…it’s the ONLY game that matters right now and I have to listen!’ Class act.’

‘Livid at footballers wearing gloves. Once tore into Willian for wearing them in the snow because he “isn’t used to it as a Brazilian” despite playing in Russia and the Ukraine for four years. Likes to randomly shout.’

‘Has taken a fairly roundabout journey to become the top man in the evening schedule, where he now works with all good people after the drama of the Stan Collymore years.’

Future days
Seems to have settled into a nice groove doing the Kick Off show on talkSPORT. I feel he’s benefited from the departure of Stan C and his tendency towards sensationalism. I’m surprised he’s not taken a TV gig at some point, but admire his dedication to radio. He does a few corporates, as many presenters do to top up their income, radio not usually being the highest-paid gig in the media. I’d love him to be involved at 5 live again at some point. He set a standard at the station that others have picked up and made their own. I’m sure he’d be a good narrator for documentaries, as well as being a good pick for the weekly Commentators and Presenters summit which 5 live will one day make, if only to shut me up from going on about it.

Seems set for many more years at the helm on talkSPORT, (at least until Greeny hangs up his mic on 5 live!) I wrote this whilst listening to him for three hours on Tuesday, Wednesday and Thursday evening and he was a very comfortable and interesting companion for the whole nine hours. And that’s the ultimate compliment for any radio broadcaster.