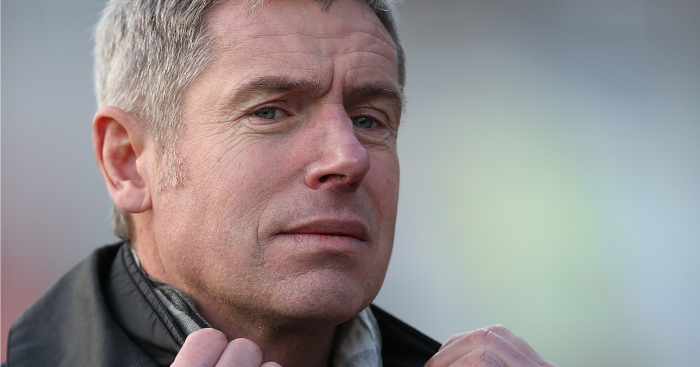 Why the love?
These days he’s freelance and works on BT Sport doing all sorts of football, may well crop up on ITV and is, as I write this, on talkSPORT for three hours in the evening. While it might seem hard to believe, he’s been in the presenting job for not too far short of 20 years. Now 51 (and looking at least 10 years younger) he’s not been short of work but for much of this time has fulfilled the role of the presenter who doesn’t do the high-profile stuff, but is on the less popular channel, or at the less popular time, doubtless picking up less money than the big name high-profile presenters.

It sometimes seems as if he’s forever warming the reliable performers subs’ bench, but that would be unfair, as there are so few really high profile TV or radio presenting jobs.

And although he is the epitome of the reliable pro, that shouldn’t suggest he is lacking in any way at all. Many share my feeling that he’s been unlucky to have others promoted ahead of him on some occasions.

He’s got a hinterland and I always think that helps in this business. He enjoyed a year in Italy, some of which was spent vomiting out his flat window onto cars below, apparently. Well, we’ve all done it. With a degree in Modern Languages and Political Studies from Sheffield and having worked for AP in Rome and then as a TV producer, maybe it is having done a few different roles on either side of the camera that gives him the broadcasting chops that make him so distinctive today. It must help to know what to do when you know what the people behind the camera want.

When talking to The Football Pink three years ago he said: “Television is like a jigsaw puzzle, it’s very much a team game. The presenter is just another element of the jigsaw. There is a perception by some, who sit in the chair that I do, that they’re at the top of the pyramid. I don’t see it like that, I see it that every element goes together to make a good program.” And that seems to be a thoroughly inclusive, sensible way to go about things.

He worked on 5 live many moons ago doing news reports and then did 14 years at ITV, even surviving the cull of ITV Digital. For years he did the late shifts on Champions League coverage highlights and less high-profile games. Others came and went but he was still there, gradually moving up the ladder. Then ITV lost the Champions League rights so he went freelance and followed the competition to BT Sport, which was a very sensible move on the broadcaster’s part as he is, in a very unassuming way, part of the European broadcasting furniture in the way that Clive Tyldesley and Andy Townsend always will be, even though they don’t work on it any more.

He’s a Liverpool fan but, as you would expect of any impartial broadcaster, that’s never really been obvious. Except perhaps in Istanbul in 2005.

Superhero skills
He’s got that most important of qualities in his broadcasting skill set: relaxation. Like great cricketers who seem to see the ball in slow motion, he always has time at hand. He seems completely unruffled no matter what might happen. If the studio was invaded by naked clowns riding on llamas, I imagine he’d raise an eyebrow, turn to the camera and make an off-the-cuff double entendre before moving onto the highlights of the Europa League.

This easy-going attitude really pays off in spades on the radio. I’m new to his wireless work and have been loving his talkSPORT performances because he invests proceedings with that informal chatty style which suggests everything is made up on the spot, when it absolutely isn’t. That is always a great trick to pull off and you must need to feel totally in your element and in control to have the confidence to do it, as well as knowing when to run with an interesting discussion, or when to wrap it up and move on.

Being a smooth, easy-to-listen-to presenter is essential when you’re doing long, three-hour broadcasts. An annoying accent, ticks or aurally unpleasant aesthetics can make it all unbearable. Matt pours out of the radio like liquid silk and manages to shift effortlessly from one sport to another with straight medium pace. There are no peaks and troughs; it all keeps an even standard throughout.

On TV, aside from being the very definition of unflappable, he also possesses a quality which some of the best broadcasters have had, perhaps especially Des Lynam. It is the ability to say a lot more with an expression than with words. Matt raises a very good eyebrow in the manner of James Bond, and it can hint at a bit of sauce, or it can be a wry comment on the veracity of a manager or player’s post-match words. Des was brilliant at letting you know what he was thinking without explicitly saying anything, and Matt definitely owns some of the same spirit.

He’s also obviously a football fan and has deep knowledge from years of coverage, all of which comes out in discussions. This week he mentioned attending a pre-season friendly between Salford and Fleetwood, commenting on how Salford have bought Adam Rooney from Aberdeen and can afford to pay him more, as a fifth-tier side in England, than the Dons could in the Scottish top flight. This is the sort of informal but informed work that is an absolute pleasure to listen to.

Style guru?
A good-looking fella, but he’s no fashion icon. Very much shopping at the plain and sensible end of the fashion market. Lots of soft wool jumpers, maybe a polo shirt and an expensive cashmere-rich coat in the winter, is all very much in the Smithy wardrobe. All I ask of any man in the modern world is to not wear those silly long brown shoes which curl up at the toes, often married with a blue suit. This seems to be the male estate agent’s uniform in 2018 and I simply don’t trust anyone who appears in such garb. There’s a whiff of the spiv about it and the shoes look like they’ve been stolen from a clown. There, I’ve said it.

Matt, now in his 50s, is rockin’ the silver fox look and fair play to him for not going down the Just For Men route. It suggests a chap at ease in his own skin and unafraid of ageing.

What The People Say
Because he’s such an undemonstrative character, he definitely doesn’t stick in some people’s minds the way some of the more noisy TV types do, and that possibly limited the input for this section from fans. I scoured social media for comments about him and there were literally almost none. He doesn’t ruffle feathers at all, he just slips and slides through our lives with no harsh edges, like pulling on the softest of lambswool socks. This isn’t by accident, but testament to his qualities as a broadcaster.

‘Unbelievably underrated, I would put him in the same mould as Mark Chapman, which on my part is a huge compliment. Any time I see Inverdale tw*tting about, I feel it’s a missed opportunity not to utilise Matt Smith.’

‘Charming, unassuming lets his guests get on with it while seamlessly interjecting at the appropriate time!’

‘I worked with Matt at ITV Digital for the few months it was in existence. He is honestly one of the most technically adept TV presenters I’ve ever seen. It’s the stuff you never notice at home but only if the guy doing it is that good.’

‘You’d have to be of a certain age to appreciate him as the Paul Madeley of sports broadcasting. Give him any sport and he’ll do a terrific job on it as he always seems to do his homework. Comes across as a genuinely nice guy that others enjoy working with.’

‘Was good on Tour de France.’

‘The modern day Jim Rosenthal of sport presenting. Pops up on the football, the darts, cricket & cycling to name but a few and does a very good job. Maybe flexibility has also been his downfall in cementing the top gigs? His departure from ITV football still baffles me.’

‘Starts every broadcast with ‘evening’. Don’t need more than that. Economical with words in a good way. Liked his work on the Africa Cup of Nations when ITV had it.’

‘He is like the supply teacher at school who was actually better than your teacher, and left you wondering how and why this happened.’

‘Followed Matt via local TV and ITV for years. He’s up there with the best presenters for sure. Very calm and unhurried style and seems knowledgeable. Extremely safe pair of hands. Shame he’s a red.’

‘He can control the class and I’ve never seen a PFM mooning on screen when he’s been in charge.’

Future Days
Imagine if you’re a TV producer and you need a presenter for a show, whether it is about football or any other sport. Who you gonna call? You’re gonna call Matt Smith, aren’t you? Because you know exactly how he will do the job. Reliability is possibly the most important aspect to any occupation, and that’s why he’s never short of work. But this is not just luck.

It seems unfair that because you’re not an ex-player, or not a massive gobsh*te, or are simply a modest, undemonstrative personality, that this should prevent you from reaching to top of your trade. At some point in the next five years, I expect Matt to get the biggest of big gigs on a channel who wants top class work from a top class pro.