Home Chelsea A Football365 love letter to… Saint and Greavsie 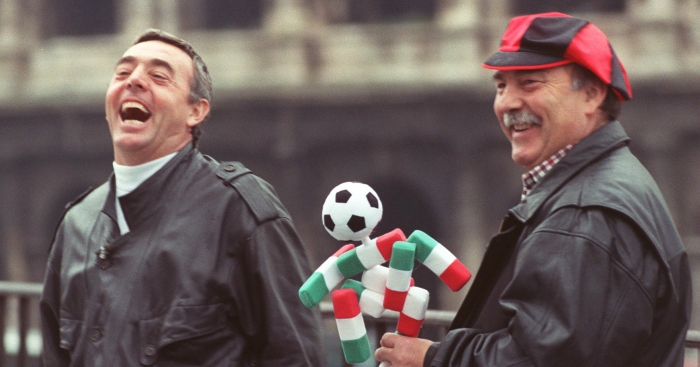 Johnny is squeezing the trigger on his love gun again. This week he’s wearing a brightly coloured lambswool sweater and laughing a lot. That’ll be Saint and Greavsie, then.

Why the love?
We all grew up (Ok, I was 24 when it started) with them on our telly on a Saturday lunchtime. In my mind’s eye, Saint & Greavsie was on ITV for at least a decade, but in fact it was just seven years from 1985 to 1992. But what a seven years they were and how deeply that show went into the national consciousness.

Let’s go back in time with the original opening credits. The theme tune, as most were back in the day, was based around a musical refrain as an expression of the title of the show. See also: Blankety Blank. Thus you can sing “Saint and Greavsie” over and over to this.

By 1989 it had changed to this version, which sounds oddly melancholic, as though already pining for the passing years that turned us from youths into middle-aged men. I’ve not heard this for the best part of 28 years but it is so totally ingrained into my cultural DNA and it feels like it was just last week that I heard it.

They were a unique double act, the like of which had never been employed to do a football show before. With Saint being the nominal straight man and Jimmy the jester, they were unmissable at Saturday dinnertime.

The football bit of the show was the usual goals and interviews package over half an hour (45 minutes in the last series) but the reason we tuned in was to watch Saint cracking up after some off-hand comment from Jimmy. His laugh being that distinctive repeated single note. Even now, you know what it sounds like. To do an impression of Ian, all you need to do is that dry ‘ha-ha-ha-ha’.

This was the era of Spitting Image and this must surely be one of their most affectionate tributes. In case you don’t know, the voice of Greavsie is provided by none other than commentator Peter Brackley, more well-known in this era for his work on Football Italia. God bless you PB.

Yes, compared to modern telly it was a bit politically dodgy. Over footage of the Saudi Arabia U-20 side on their knees, heads touching the ground while praying before a game against Scotland, Jimmy says they’re “…enjoying the pre-match vegetarian meal,” as though they’re eating the grass. Now, you’d get thrown off the telly today for saying that. I’m no fan of excusing the sins of the past as just a bit of fun, but having rewatched a few clips, it’s all very gentle stuff.

There was a S & G board game too and plenty of Christmas bloopers and gaffs videos under the ‘It’s A Funny Ol’ Game’ title. Many Yuletides were spent watching the two fellas chortling their way through clips of Gazza sniffing the refs armpit or someone pulling hamstring whilst taking penalty.

Superhero skills
There was a great yin and yang to the aesthetics of their voices. Saint from Motherwell, south of Glasgow, had that west of Scotland certainty to his tone. Jimmy by contrast was from Manor Park in Essex and seemed very geezerish, amusement seemingly built into his voice.

While the Saint read from a script, Jimmy seemed to be given free reign to improvise, pitching in with quips and jokes, chuckling along all the while. That was the essence of the show’s success. At times it seemed as though Jimmy had not seen the video footage beforehand, had just turned up a few minutes before the show and busked most of it.

I know this doesn’t seem like much, but they had a massive cultural resonance in the country. Prior to them, football was always treated with reverence. Cup Final day aside, there was little or no room for jokes, for taking the pish, for being irreverent. Yet it all came from a place of love. There was no nastiness. The fact that the jokes came from possibly the greatest English footballer ever only made it better. (I saw him play: let me tell you, he was like quicksilver)

They were subject to an affectionate parody on Fantasy Football, of course:

Style guru?
This sums them up. Ian, the smart, sober one, always wore a suit. Jimmy was colourful in an unstructured printed viscose shirt with trousers that you’d have to call slacks, possibly made by Farah.

In winter Jimmy might also sport the sort of V-neck jumper you might buy in a golf club or the Edinburgh Woollen Mill, possibly made by Pringle and featuring a diamond pattern or a repeat motif of some sort.

These were the sort of clothes most men in their 40s (they were 47 and 45 respectively when the show started) seemed to wear in the 80s. They seem somehow much older than their contemporary age group does today.

Anyone with a drink issue who might hold this up on national TV earns every PFM’s respect.

Saint was there in the glory days of Shanks at Liverpool which is in itself off the scale PFMing. Better still he made a living out of reiterating Shanks’ bon mots and witticisms, always ending each one with that laugh. That’s the sort of quality recycling of your life for money that all PFMs love.

On top of this, Greavsie was simply the finest goalscorer of any generation. So both were stellar players who played back when men were definitely men and didn’t wear coloured boots or aftershave and the only 6-pack you had was made by Watney’s Red Barrel.

The PFMs probably still get together and watch old VHS tapes of the show, purring with delight at the fact both presenters have great nicknames, one is a recovering alcoholic and both are experts in the art of the sort of banter that plays up to national stereotypes that all PFMs love. No offence, Jeff. MmmmmmDeadlyDougChillyJockoLanRosieCloughieBigRon mmmmm.

And “It’s a funny old game” is a brilliant catchphrase, ‘cos it is Jeff, it literally is. Literally.

And they were never afraid to play up to national stereotypes which is how it should be as it means you don’t have to think about nothin’ new and that’s good, Jeff, because I’m no good at thinking and I prefer shoutin’ instead. It’s all headphones and manbags these days. That ain’t right, either.

And what’s more they wore proper men’s clothes bought from a menswear shop run by a thick-set man with a moustache who could take a punch and would be happy to do so in order to prove he’s not gay.

This is a world the Proper Football Man understands and wishes still existed outside of a working men’s club in Heptonstall.

What the people say
So many people were nurtured by S & G that it’s no surprise there’s much nostalgic affection for them both:

‘My first ever memories of football punditry. Like Stadler and Waldorf from the muppet show.’

‘Easy-going humour of two people who knew about the game and seemed to genuinely enjoy talking about it and being in each other’s company.’

‘It was like watching my nan and grandad on the telly talking footy.’

‘Loved the opening-Daley whipping a cross in. Greavsie wearing Tony Soprano shirts. An oasis when you had to search for footy.’

‘Tremendous. I loved that show. St John was the giggling Corbett to Greavsie’s Barker.’

‘As a youngster it was a must in our house!’

‘That theme tune. I remember it well even now. My Dad used to love that show, he watched it just as I was getting into football.’

‘Met the Saint at my cousin’s bar mitzvah. He asked me who i supported, I told him, united. He looked at me with disgust. He asked me who my fav player was. I told him Norman Whiteside . He spat out “he’s a bloody animal, that fella”. I was 7….’

‘Greavsie banging on about Hamilton ‘Up the Accies’. Saint just laughing. Still more relevant and funny than Soccer AM after all this time.’

‘Maybe because of the show, Greaves rarely venerated like Charlton, Moore, Gazza, but is an all time world great. Ronaldo just catching him now!’

‘Greavsie muttering about Graham Kelly’s cord breaking on the bungee jump in Euro ’92..’

‘Greavsie saying, that’s a load of old b*llocks, to Linford Christie when Linford was whining about something or other.’

‘They did introduce some humour and fun in presenting football and they both knew the game. Quite innovative in a way.’

‘In terms of shows that play it for laughs they were the best. Never knew what Greavsie would say next.’

‘The Two Ronnies of Football.’

‘It was of its time, and massively influential.’

‘All that was wonderful about being a kid in the eighties on a Saturday afternoon. I bloody loved that show.’

‘Just remembered my dad explaining what an alcoholic was to me when Jimmy was absent again.’

‘Top banter before banter was even a thing.’

‘Saturday lunch time waiting for my dad to come home from work and watch it with me. Happiest time of the week.’

‘I think the programme was probably terrible yet still stirs positive emotions in me. The Skinner/Baddiel take off was excellent.’

‘Nothing gave me more excitement than S & G.’

‘The show was the first to realise lots of things about football are very funny.’

‘Knitwear in abundance. Along with plenty of pre-filming snifters.’

‘I went to Glastonbury (before the beast it is today) & sprayed “bring back Saint & Greavsie” on my tent. It was a good conversation starter.’

‘An indispensable part of my Saturday lunchtime as a youth.’

Future days
They’re two older lads these days with well-documented health issues. To watch them again on YouTube today in the knowledge of that is some shade of heartbreaking. But then mortality is a curse we all have to own, whether we like it or not. We’re all going only one way.

All we can do now is smile and send the warmth in our hearts to both in return for all those Saturdays when we took for granted that they did what they did and helped make life more fun.