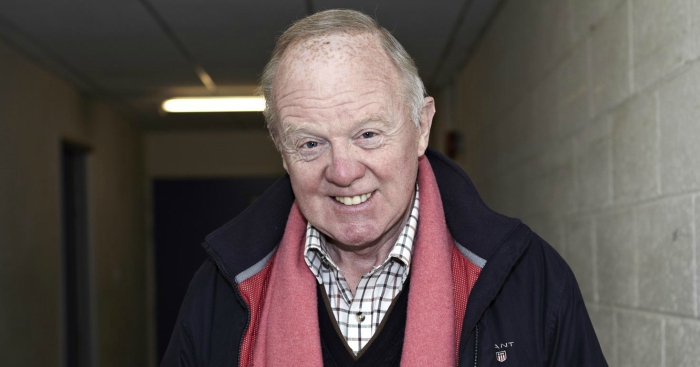 Johnny’s letter this week is to a man who was the third-longest serving football commentator on British television. That’ll be Tony Gubba, then…

Why the Love?
For a start, how many other Gubbas have you ever heard of? Not many, I’m sure. It’s an unusual name which a brief ancestry search shows is almost exclusively found in Lancashire and Yorkshire. Tony was a Manchester lad, born in 1943.

He was one of those voices and faces in our life who was just always there for years and years and years. But somewhat strangely, even though he was always on TV, he was never hugely prominent in the wider cultural firmament. Never the big star. Never the big money signing. But always the faithful, steady, high quality performer who worked on the BBC as a sports reporter, commentated on every Olympic Games, both summer and winter, from 1972 to 2012, as well as every World Cup from 1974 to 2006.

More than anyone else of his generation, he was always a distinctive enough voice to make an impression – even now I’m sure you can conjure his timbre – but never so much that he became grating or annoying. He didn’t have any catchphrases and his voice only had a faint flavour of flat, northwest vowels but through constant exposure his voice was a welcome ear worm for all of us.

As well as the football, he had possibly the widest panoply of sports of any commentator to cover, from darts to ice-skating, hockey to table tennis, bobsleigh to ski jumping, speed skating, cycling, rowing, judo, golf and tennis. He would also present programmes covering any of these sports too and would interview performers. He really was virtually omnipresent on TV for over 40 years, if you watched pretty much any sport. And never once did you ever feel he was out of his depth, disinterested or uncommitted. That is a tremendous achievement and a great tribute to his professionalism.

It didn’t stop there. As well as all of those jobs, he presented Sportsnight for three years in the 70s, would stand in on Grandstand too and, later in life, commentated on Dancing on Ice on ITV. I have no idea what Dancing on Ice is or was, but I saw Rick Wakeman’s, ‘The Myths and Legends of King Arthur and the Knights of the Round Table,’ on ice and it was rubbish, even though the music was great. I can’t imagine some show on ITV with C-list celebrities is going to even match that. Still, Tony did eight series.

Superhero Skills
For all he looked rather friendly and mild mannered, what we might have forgotten now is that Tony could be quite an acerbic and spiky interviewer

John Motson, his friend for 42 years, recounts a couple of stories here that suggest Tony had a bit of rock ‘n’ roll about him and wasn’t always prepared to take the path of least resistance.

“His strength was that he was a very good broadcaster and journalist. He was mainly a football man to start with, and that was his real love, but he was very flexible. He could turn his hand to anything. Bobsleigh, table tennis, ice-skating, ski jumping, rowing … He would be on everybody’s team for the winter and summer Olympics. He never complained or grumbled when he was asked to do something, he just went away and did his homework. He could present, commentate and was a first-class reporter.”

He could come out with something a little more poetic when reporting, such as this about Trevor Francis after his million pound transfer:

“Others suspect that, like the Mad Hatter at Alice’s tea party with ten shillings and sixpence stuck in his hat, Trevor Francis has been condemned to complete his career under the questioning shadow of that emotive seven-figure sum.”

Majesty. Modern media tends to steer away from literary analogies, so in 2017, someone making reference to Alice in Wonderland seems wildly exotic.

Gubba once refused to sell his house in Formby to anyone who had a cat because of all the birds nesting in his garden would suffer feline wrath, which seems rather progressive green behaviour for 1972.

Style Guru?
Possibly because he was always was a little short of a full head of hair and sported a classic combover for as long as possible, and thus looked older when young, Tony seemed to age very slowly.

Like any 70s and 80s presenter worth his salt, he wore a range of sports casual clothing some of which looks made of dangerously flammable material, which would now be illegal.

There is evidence of him sporting a fetching pink sleeveless wooly pully and seems to have been a keen advocate various shades of beige as his colour of choice, possibly because it matched his fair-to-blonde hair, or possibly because almost everything in the 70s was brown and beige with a hint of orange.

Also certainly owned a big sheepskin coat in the Motty tradition and some sort of leather car coat and those string-backed, leather palmed driving gloves.

What The People Say
Phil Wye, the ex-BBC 5Live, Match of the Day, Question of Sport & Sky Sports producer was good enough to get in touch with me to say this about Tony:

“I was part of the BBC TV football team around the turn of the century & worked at times with Tony. I didn’t know him well, but when he marched in on those late 90s Tuesday mornings, commandeered the desk of a junior who might’ve just nipped out to fetch something (I tended not to mind!) & parked his briefcase on it in readiness for a Football Focus meeting, I always found him to be bright, breezy, to the point and a chap with a twinkle in his eye.

“An unflappable “utility man” for football and Grandstand back in the day, he could be a forthright sports interviewer as well as a memorable commentator.

“I most fondly recall commentary lines such as “It’s like being inside a giant satsuma here!” at a game illuminated by Dutch fans, and indeed questions like this one to Wycombe Wanderers’ 2001 FA Cup Quarter-Final match-winner Roy Essandoh – a journeyman who’d been drafted in as emergency cover via an ad on Teletext: “First of all, Roy, no offence but – who are you?”

“As brilliantly pertinent as it was audacious. Nobody else would’ve kicked off a post match interview that way.

“Tony had the broadcasting enthusiasm, the assertiveness and the self-confidence to be among the fond inspirations for sports commentator comedy show send-ups – The Fast Show’s ‘Antonius Gubba’ being one obvious example. Another suggestion, possibly, is that a few Gubbaisms might’ve been adopted by the icon that is ‘Alan Partridge’, whose own line “The goalkeeper has football pie all over his shirt!” is one that Mr Gubba might not have batted an eyelid at.

“As one of a group of fledgling producers back then, I enjoyed working with Tony at TV Centre. Like so many broadcasters from that era, and the BBC Sport stable, he was a character, & a bit of a ledge.”

All of which is a tremendous insight into the man. Other readers got in touch to recount their memories of him and unsurprisingly he touched a lot of people’s lives over so many years.

– The only man who could make Dancing On Ice watchable. #toddcarty Much missed.

– Seemed to know his place in the commentary pecking order like Ally Mann nowadays.

– My mate always used the Tony Gubba Celebrity Benchmark as a measure of fame. Would more people recognise _____ or Tony Gubba? That was how we decided whether somebody could be classed as well known.

– One of a generation of excellent football broadcasters on the BBC… not as charismatic as some of his contemporaries but always good.

– 1998 World Cup. Romania v Tunisia. Same time as England v Colombia. The game no one cares about, no red button then. And the Romanian team all dyed their hair blonde, just to make it even harder. Dealt with as only Tony Gubba could.

– I always think of the golden age of MotD as when they’d have three games (no need for any more) with Motty, Barry and Tony the commentators.

– My mum (a nurse) looked after his mum for a while & said he was an absolute gent.

– Loved him. Smooth voice. Was it him that created the weird pronunciation of Ndlovu?

– One of the best. Always remember him covering the Leicester 3-3 Arsenal in 1997. Was having kittens when Bergkamp got the hat-trick.

– Bit of a renaissance man, could turn his hand to plenty of sports but also a talented opera singer.

– Always seemed to get the tough job of commentating down two yoghurt pots for European away legs. Came to our uni for a do and was lovely

– After years of commentating on third-on-the-bill, 0-0 draws, he got the greatest giant killing of them all! “He’s done it! The magic little man!” (reference to Micky Thomas’s winner v Arsenal in the cup)

– Remember him and big Mick McCarthy working well today at a couple of tournaments. Sure he called him “Gubbs” as well

– He did the commentary on International Superstar Soccer 98 for the N64, and when you lost he’d say, “what a pity one of them had to lose.”

– The supply commentator. We took the p**s (as Half Man Biscuit did) but actually quite liked and respected him.

– No better tribute to him than the sports reporter on The Fast Show’s Channel 9 News Sketch being christened ‘Antonios Gubba’.

– The saddest thing is that it feels like he was appreciated more after his death. A constant in MOTD whilst adjusting to Sky era. Class.

– Just the name conjures up gas-fire warmed dark afternoons listening to match reports while my now departed Dad and my still here Uncle slept off a combination of an afternoon pint and shepherding me, my sisters, and my cousins on a day out. Happy days.

Future Days
Tony died of Leukemia at the young age of just 69 four years ago.

“He was the sort of person who was the same every time you saw him – he was Tony. I never remember him looking down or being fed up. If he had a complaint, he’d make it, but he was very much himself all the time … He’s left his mark, there’s absolutely no doubt about that.”

The BBC made a lovely three-minute tribute to him and I’ll leave you with it.

Pretty much whatever age you are, seeing this will likely move you somewhat because, like all such familiar, comfortable and enjoyable presences, in a way, it is like they have never left. They live on in the ether, the way a friend or relation does. Corporeally gone but everything else somehow still present.

Maybe that is the greatest tribute of all you could pay to a broadcaster. Good old Tony.