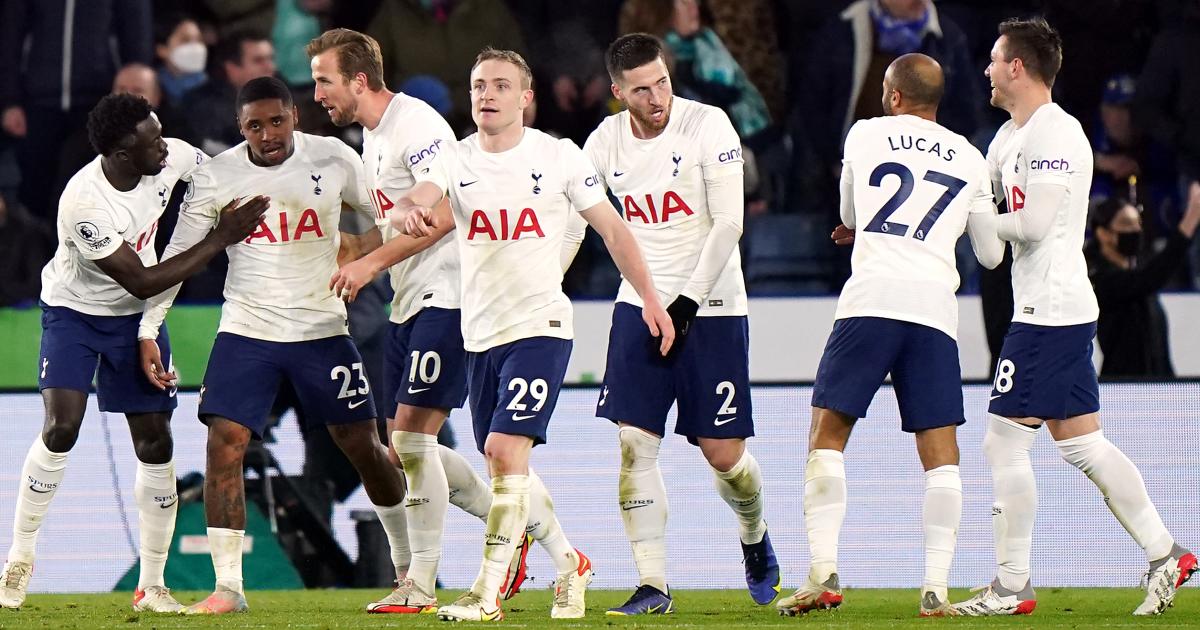 With 20 seconds of the scheduled five minutes added time to play, Leicester City had a goal-kick and a 2-1 lead.

A significant win over a top-four challenger for a team that has endured a difficult, injury-plagued season was just a few moments of sensible football away. It wasn’t exactly going to be a smash and grab, but it was also fair to say this was a win that would be achieved in adversity, with several players still out against a side unbeaten in eight league games and who controlled large parts of an entertaining clash.

A hundred seconds later, Spurs had scored twice and somehow burgled the most astonishing victory.

There were 94 minutes and 53 seconds on the clock when Steven Bergwijn smashed home the equaliser – it is by far the latest a team has trailed in a Premier League game and gone on to win. The previous record of 91 minutes and 12 seconds in the Aguerooooooo game was in fairness probably a bit more significant. But this was still absolutely wild.

And not insignificant either. Spurs had played well enough but looked set to spurn a huge chance to make a huge statement in an increasingly messy pursuit of Champions League qualification as inconsistent form and postponements hit the various contenders.

Defeat would not have been terminal. Indeed, there were still going to be positives to take even in the loss of Antonio Conte’s unbeaten Premier League record. After a series of unconvincing displays in league and cup competitions alike, this was much more like it. Harry Kane played with the sort of menace scarcely seen this season, once again locating that sweet spot where he is able to drop deep and create – something this Spurs side really does need – without limiting his own goalscoring chances. The finishing, with one unerringly precise exception that had brought the scores level at 1-1 in the first half, was awry but with Kane, that is less of a worry than his overall contribution. There is rarely any doubt that he will iron out that flaw.

Both Leicester’s goals had also come against the run of play and had an air of good fortune alongside some impressive build-up. It was a defeat that would have been immensely frustrating but not terminal given the much-improved overall performance. With Son Heung-min absent but Kane buzzing around to such great effect, the shift from 3-4-3 to 5-3-2 has much to recommend it as a make-do-and-mend for a team missing its two most senior central defenders and still prone to defensive calamity.

The three-man central midfield of Hojbjerg, Winks and Skipp is more endeavour than enterprise but all have just enough difference to avoid it becoming too one-dimensional in there. Not perfect, but not bad until reinforcements can arrive.

But now those positives have three points to go with them thanks to those truly batsh*t closing seconds, things suddenly look very good indeed for Spurs.

The manner of this win was, obviously, extraordinary. But even the nature of the goals is encouraging. Hojbjerg, rightly maligned in recent weeks, was integral in both, his pass for Matt Doherty creating the chaos for the equaliser and then his block from Youri Tielemans’ inexplicable pass moments later creating the counter-attack for the winner. Someone who isn’t Kane or Son scoring goals is also monumentally important for a team hugely dependent on those two. It was Kane himself with a through ball of exquisite perfection in the dying moment, weighted perfectly not just for the run of Bergwijn but also to tempt Kasper Schmeichel to come out of his goal but to stop short of coming for the ball.

Even the response to the equaliser, Bergwijn eschewing wild celebrations in favour of retrieving the ball in pursuit of a vanishingly unlikely winner, is revealing. Antonio Conte is not just an elite manager of elite players; he is perhaps the best of the current crop of vastly successful supermanagers at getting a tune out of non-elite ones. With all due respect to this Spurs squad, that might be his greatest asset.

We’ve already seen it with the improvements of Skipp and Winks and Davinson Sanchez. If Bergwijn can now follow suit having recovered from injury, it could be worth far more than three chaotically improbable points.

There are still multiple reasons for caution, of course. Lose to Chelsea – as they already have, convincingly, three times this season – and that particular gap opens right up again. They have a tough second half of the season, not least because all those games in hand will have to be squeezed in somewhere. As well as Stamford Bridge they must still also travel to the Etihad and Anfield. And Old Trafford. They have played Watford (who are terrible) twice and Brighton (who are good) not at all.

But there are also signs that Conte’s sheer inherent Conteness might be able to at least suppress if not totally overpower Spurs’ Spursiness. They are already fitter than they ever were under Mourinho or Nuno. A team that routinely dropped points in the last 10 minutes of games has now netted winners in the 96th and 97th minutes of their last two Premier League games.

This was also just an extension of a frankly absurd series of matches between these two teams. Spurs have won seven and Leicester three of their last 10 Premier League contests but this tells a fraction of the story; those games have featured a total of 45 goals.

In that context it would perhaps be unwise to draw too many conclusions. Certainly not 16. Maybe this is just a fixture that throws up chaos and that’s all there is to it.

Or maybe something is actually happening at Spurs. We’ll know more on Sunday.