Home F365 Says A lesson from a Liverpool fan: Ignore the idiot minority… 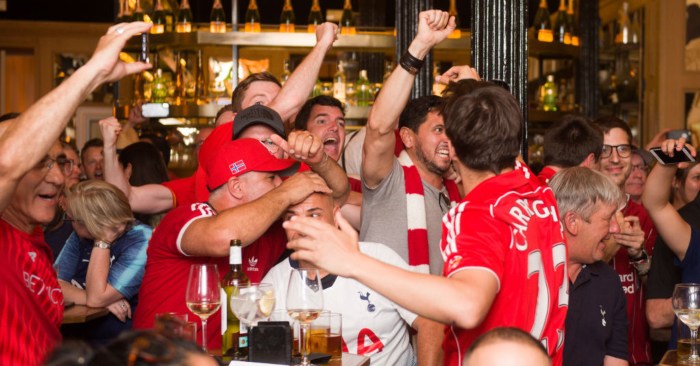 It continued on the walk to the Metropolitano Stadium. That ‘victim’ classic again. A group of three.

Remarkably, it carried on in our seats inside the ground. “Sign on, sign on, and you’ll ne-ver get a job.” Remarkable as two were older gentlemen who seemed to represent themselves as Tottenham directors. Remarkable as one was a father with his young son sat next to him. Remarkable as I would have expected people associated with Tottenham Hotspur to not be making light of poverty and unemployment, given the situation with their own club’s local community.

My football experience is intrinsically linked to Football365; I have been reading this site, Mediawatch and The Mailbox et al, since 2004. I really value the perspective it has provided for me over these 15 years, particularly in contrast to those from outlets we so often see cited in Mediawatch. I even feel vicarious pride when F365’s writers are recognised for their excellence, as Daniel Storey and John Nicholson have been in recent years, or when their work is cited by the major football podcasts (which is happening with increasing regularity).

That said, media shapes us, and as pointed out in an excellent article last year, the F365 Mailbox has helped foster a bizarre internet-based rivalry between Liverpool and Tottenham. (The same rivalry presumably plays out over Twitter, although I avoid the platform at all costs). As a result – given the age of social media we live in, given the blurry line of ‘acceptable banter’ – I was desperate for Ajax to knock Tottenham out of the semi-finals. Partly for the sake of schadenfreude, but mostly out of sincere fear: fear of the humiliation of losing to domestic rivals, fear of violence in the streets of Madrid and London.

It has been 72 hours since the Champions League final. I’ve listened to all the podcasts. I’ve read all the reaction pieces. I’ve read The Mailbox. I spoke to fellow Liverpool fans throughout the weekend.

I am apparently the only person who witnessed any kind of hostility or unpleasantness from one fan group towards the other.

So what’s the takeaway? What conclusion is there to be drawn from all this, if any?

Personally, the lesson I’m taking away is the irrelevance of my own personal experiences: that it is possible to witness something first-hand, and for that to not represent any wider truth. It might be easier for me to tell myself ‘the journalists and podcasters missed it all, I’m the one who saw what really happened’ – but that would be delusional. It’s harder, and more real, to accept that my own perspective is just one in seven billion.

I wanted to share this anecdote in hope that it might inspire others to forgive and forget the actions of isolated minorities of rival fans. Maybe these actions come in the form of awful banter on Twitter. Maybe these are reactionary bullsh*t submissions to The Mailbox. Maybe it even spills over into real life. Whatever form these take, the world only gets more negative and angry when you take what one person says or does and extrapolate it across a wider group of people. This is how bizarre internet-based rivalries are born, grow and fester.

Thankfully, in Madrid and seemingly everywhere else that matters (read: not social media), a sense of reason appears to have prevailed. After the last couple of years we’ve had, long may that trend continue.